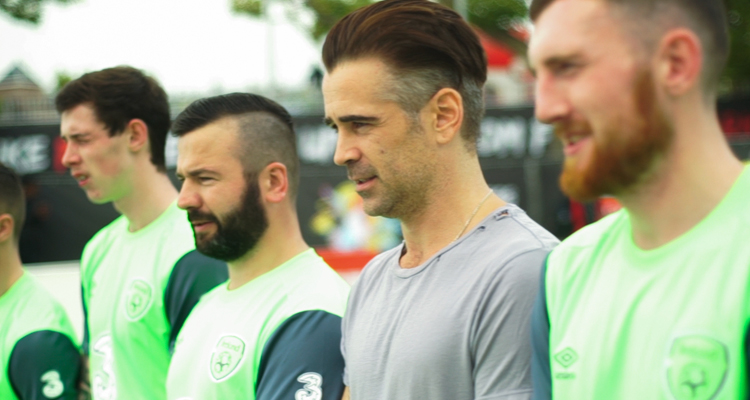 In recent years, Ireland has seen a surge of homeless people. They have become victims to drink, drugs and other social problems. However, there is a light at the end of the tunnel. Sean Kavanagh set up the Street Leagues programme to give homeless Irish people the opportunity to climb above their problems and find a sense of purpose. Training them for football matches, he encourages a community spirit among these troubled men and women. This will take them on a life-changing trip to Oslo, Norway to represent Ireland in the Homeless World Cup…

The Verdict: ‘A ball can change a life’ is the motto behind the Street Leagues programme. So too could a film change attitudes about homeless people, who are all too easily forgotten about as we go about our busy lives. They have had difficult lives and have gone through unfortunate times, but they strive to better themselves through the unifying arena of the beautiful game. That’s the premise behind Irish documentary feature Street Leagues. It captures a hectic but rewarding few months in the lives of a group of male and female homeless football players as they overcome their problems and change for the better.

There is something about football that brings people together, putting all the players on the same level and allowing them to work as a team to achieve a greater glory. That’s what we observe in Street Leagues, as disparate players train up on street football and then take their A game to Oslo for international football – games which they win, draw and lose (such is the bittersweet nature of tournaments). As cheery as it is in this film, football is more of a catalyst for changing people, something which founder Sean Kavanagh is keen to point out. He’s not wrong. Watching the journey of these men and women, from dark despair to picking themselves up to finding purpose is indeed inspirational. They’re also pretty good football players too.

As heartfelt as it is though, Street Leagues is too short and mostly lacking in social context to become a fully-formed film. There are some stark statistics in the opening credits (10,500 homeless people in Ireland), but an outsider looking in might wonder how these players got to this point. It’s less of a journey film and more of an overview of the Street Leagues programme and its force for good. There are some characters here, but none of them are sketched in any great detail. If director Daniel F. Holmes (who also directed the pro-choice abortion drama Dive) had focused on one particular player throughout then it could have been a more focused story of rising up and finding a way back to the light.

As it stands, Street Leagues is fine for what it is. A straightforward account of the Street Leagues team and their time at the Homeless World Cup as they represent Ireland and transition to a better life on return. Colin Farrell, who is an ambassador for the programme, pops up infrequently to offer perceptive words of encouragement. Holmes could have used him a bit more though, relating Farrell’s own battle with his personal demons for reference. There’s still here plenty here though to warm the heart and encourage people to see that every problem has a solution. It just takes willpower. As a result, Street Leagues has its heart in the right place and is mostly on the ball. The main feature is preceded by short film Warm For Winter, which highlights a recent Dublin initiative for homeless people which gained global attention.

In short: Mostly On The Ball