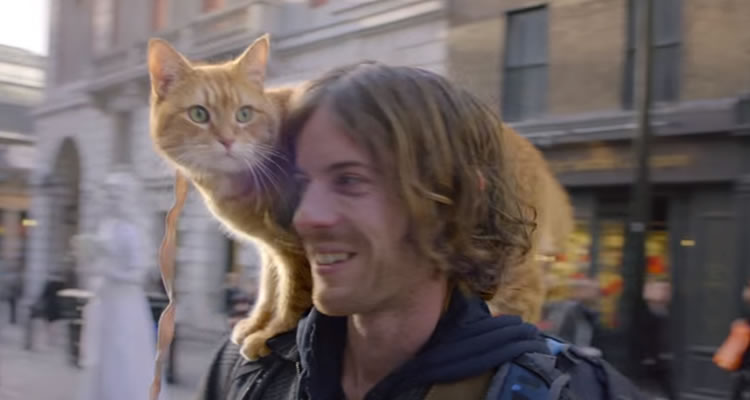 A STREET CAT NAMED BOB (UK/12A/103mins)
Directed by Roger Spottiswoode. Starring Luke Treadaway, Anthony Head, Bob the Cat, Joanne Froggatt, Ruth Gedmintas
THE PLOT: James (Luke Treadaway) is homeless and struggling to overcome drug addiction. Busking on the streets for money, James’s luck begins to change when he is awarded emergency housing. On his first night in his new home, James gets an unexpected visitor; a ginger cat. When the cat won’t leave James and Bob – as the cat comes to be named – become fast friends, even busking together, making new friends and reconnecting with old ones.
THE VERDICT: ‘A Street Cat Named Bob’ is based on the true story of James Bowen, and the book of the same name. The tagline “Sometimes it takes nine lives to save one” is a little on the trite side, but there is a warmth and sweetness to ‘A Street Cat Named Bob’, as well as one of the best feline performances of the year.
Luke Treadaway leads the cast as James, and makes the character one that the audience roots for. Full of dignity and hope for the future, James struggles to get his life together, but Treadaway makes sure that the character remains sweet and gentle. The relationship between Bob – playing himself for most of the film – is lovely and warm, with Bob becoming therapist, friend and companion to James. Ruta Gedmintas plays Belle, new neighbour of James, and the one who decides what Bob’s name is. Gedmintas obviously has fun with her quirky vegan warrior character, and the friendship between Belle and James is charming. There is a hint of a love story at times, but this is wisely scrapped in favour of allowing the characters to flourish on their own. The rest of the cast features Anthony Stewart Head, Joanne Froggatt, Beth Goddard and Darren Evans.
Screenwriters Tim John and Maria Nation adapted James Bowen and Garry Jenkins’s book for the big screen, and they play up the relationship between feline and human. The times when James speaks to Bob feel as though he is talking to a friend, rather than an animal, and it is this that not only makes the film work, but creates much of its charm. There are times when the film errs on the side of twee and saccharine sweet, but there is enough real drama in the film to make up for this.
Director Roger Spottiswoode paces the film evenly, and makes each character likeable, even the ones who create adversity in James and Bob’s lives are shown in a sympathetic light, which makes for interesting watching in a film where the lead character is a recovering drug addict. Bob is rightfully the focus of the film, and he easily steals the show and adds warmth and heart to the story.
In all, ‘A Street Cat Named Bob’ is a gentle, sweet and warm story that struggles through some twee and saccharine sweet moments. The film recovers, however, due to a strong cast and the best kitty performance on screen since ‘Inside Llewyn Davis’.
RATING: 3.5/5
Review by Brogen Hayes