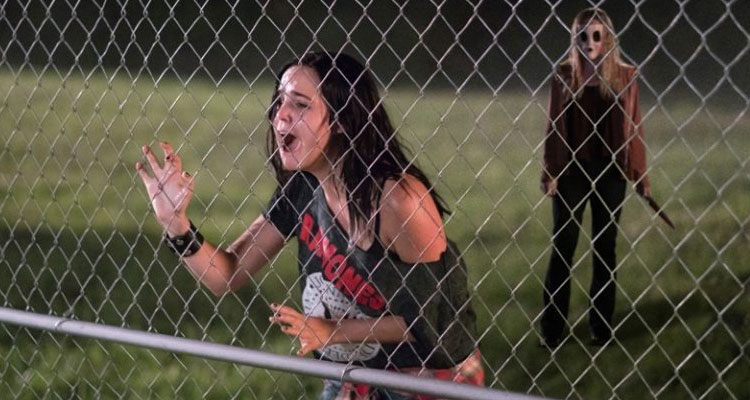 The Strangers : Prey At Night

In short: Just doesn’t cut it

The Plot: Cindy (Christina Hendricks) and her husband Mike (Martin Henderson) are going on a vacation with their two teenage children, Kinsey (Bailee Madison) and Luke (Lewis Pullman). They arrive late at night at a mobile home park run by a relative. However, nobody is around. That is, except for the young woman who knocks on their door looking for ‘Tamara’. She calls again later, saying the same thing. Not long after, a masked figure breaks into the mobile home and starts stalking them with murderous intent. This stranger is not alone and so begins a night of terror…

The Verdict: The 2008 horror flick The Strangers was memorable for being a home invasion film which took its time, ratcheting up sustained tension while not giving any easy answers. A belated sequel of sorts has followed a decade later with The Strangers: Prey At Night – even though the sequel was announced back in 2009. This reviewer has to wonder why anyone bothered, since the time to capitalise on a film’s success should be within a year or two – particularly with fickle horror audiences. It’s a lesson that the Saw films learned straight away. It also becomes apparent that Prey At Night is inferior to its predecessor.

As with the first film, this follow-up is based on true events. How true is open to interpretation, as the characters here are dumb enough to deserve being terrorised. There’s your basic American family, so cardboard that they’re just waiting to be sliced and diced rather than fighting back with all they’ve got. They don’t even heed the ominous signs. When they arrive at Camp Gatlin Lake, it might as well be Camp Crystal Lake. Dimly lit, deserted and lacking any proper weapons, it’s prime hunting ground for our three masked psychopaths (one male, two female). When asked why they are doing this, one replies ‘why not?’. Right. Any attempt to flesh out a more detailed motive is wasted here.

Johannes Roberts (47 Metres Down) shows some visual flair in his direction though, in a neon-soaked swimming pool chase scene and a flaming car that stalks a character. For a modern film, it comes across as rather retro in its delivery. This extends to the 80s-infused, John Carpenter-esque score and titles. It’s competently made, but Roberts never shakes off the impression that we’ve seen all this before – and better executed too. Opening out the story removes some of the claustrophobia of the original. It becomes less of an intense series of scares and more of a series of predictable showdowns, where you can keep a mental scoreboard on who is winning / losing. Prey At Night is a disposable, instantly forgettable sequel that just doesn’t cut it.