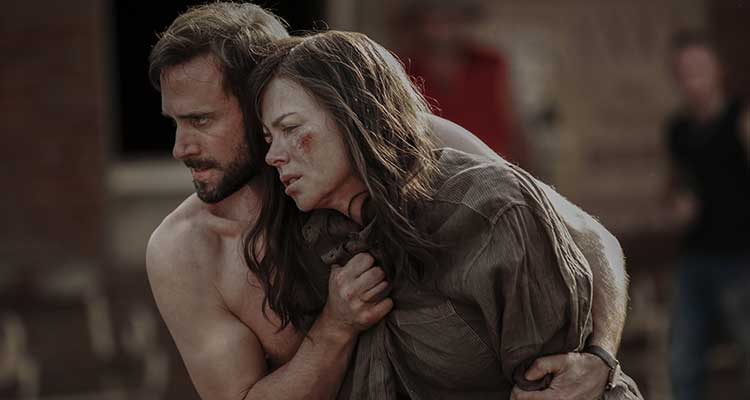 STRANGERLAND (Australia/Ireland/15A/112mins)
Directed by Kim Farrant. Starring Nicole Kidman, Joseph Fiennes, Hugo Weaving, Maddison Brown, Nicholas Hamilton, Meyne Wyatt, Sean Keenan, Jim Russell.
THE PLOT: It’s Tennessee Williams hot in the small Australian desert town of Nathgari, and new arrivals Catherine (Kidman) and Matthew (Fiennes) haven’t quite found the fresh new start they were hoping for. Their young son, Tom (Hamilton), likes to go walking around the town at night whilst their 15-year-old daughter Lilly (Brown) is in full Lolita mode, flirting with just about everyone and anything in trousers. The parents’ sexless-verging-on-loveless marriage is thrown into sharp focus though when their two kids wander off one night and never come back, local cop Rae (Weaving) soon on the case. But there are plainly ugly truths at play here…
THE VERDICT: Having picked up the long-gestating and faltering script initiated by Fiona Seres, Irish writer Michael Kinirons saw his chance here to add to cinema’s great Australian outback disappearance genre, ‘Strangerland’ inevitably echoing the likes of ‘Walkabout’ and ‘Picnic At Hanging Rock’ (the latter an all-time favourite of Kinirons). They’re mighty big EMU boots to fill though, and despite the presence of the huggable Hugo Weaving and fallen box-office giant Kidman letting it all hang out in the name of arthouse, ‘Strangerland’ struggles to convince.
Part of the problem is, of course, the buckling presence of Kidman, for so long now the very opposite of a major draw at the box-office. Having her cast alongside the Andrew Ridgely of cinema doesn’t exactly help the problem either. Unknowns in these pivotal roles might not have helped the budget, but they would have certainly helped the film.
RATING: 2/5
Review by Paul Byrne