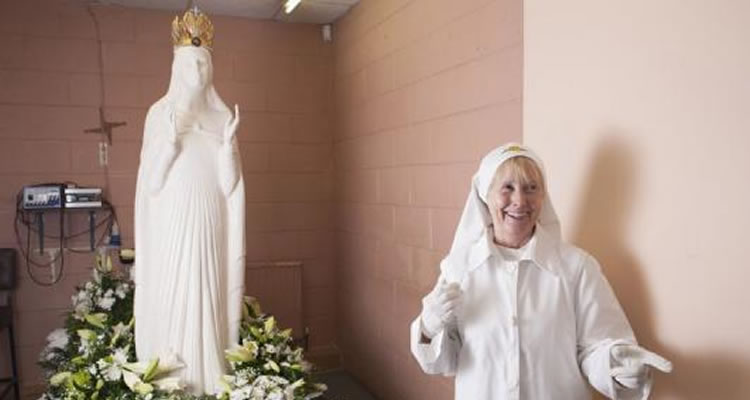 STRANGE OCCURRENCES IN A SMALL IRISH VILLAGE (USA | Italy | Ireland/PG/80mins)
Directed by Aoife Kelleher
THE PLOT: In 1879, fifteen villagers from Knock, Co Mayo, claimed to have seen apparitions of the Virgin Mary, St Joseph and St John near the village church. Now, over 135 years later, Knock is still a place Catholic pilgrims to visit, but in the wake of the scandals that have rocked the Church, and falling numbers of the faithful Knock is struggling to keep afloat. Filmmaker Aoife Kelleher takes a look at this small rural town and its most famous tourist attraction.

THE VERDICT: ‘Strange Occurrences in a Small Irish Village’ takes its name from a UK headline at the time of the apparitions in 1879, but the film could easily refer to this being what feels like the last bastion of staunch Catholicism in Ireland. Interviews with Knock priest Father Richard Gibbons, business owners, pilgrims and Knock handmaids make up the heart of the film, but without a strong throughline, this film, which could have been an examination of rural Ireland trying to survive the devastating recent financial crash, but ends up feeling like an ad for Knock.
The interviewees are balanced in their views. The parish priest seems to be honest in the way he talks about his vocation; Knock was never a place he wanted to be stationed, but he understands not to push religion on people, but to be open to those who are open to it. Descendants of those who witnessed the apparitions – Brendan Byrne, Pio Flatley and Jarlath Walsh – are more varied in their religious views, with some of them being staunch in their faith, and others – like Pio Flatley – recognising that the Church needs to change with the times. Other people who speak in the film include business owner Declan Waters who spouts some old fashioned and rather interesting views on abortion and prayer, Knock Handmaid Mildred Beirne, who believes that Handmaids are as capable as priests, and Rev. Joseph Cooney who runs the rather quaint matchmaking service Knock Marriage Bureau. The people included in the film offer a range of opinions, but there is a quaint and outdated feel to this twee story.
It seems that director Aoife Kelleher is less clear in what she is trying to achieve with ‘Strange Occurrences in a Small Irish Village’ than she was with her previous film ‘One Million Dubliners’. This is obvious throughout the documentary, which feels less an examination of rural Ireland than an advertisement for Knock and its religious shrine. There are some twee curiosities in the film, but this, in the wake of scandals throughout the Catholic Church in Ireland and beyond, feels rather old fashioned and backward looking.
In all, ‘Strange Occurrences in a Small Irish Village’ is well meaning, but without a strong examination of the apparitions themselves, or the nature of faith and belief on the island of Ireland as a whole, the film turns into an advertisement for Ireland’s national Marian Shrine. Try as the film might, it cannot shake this feeling off, and this is its downfall.