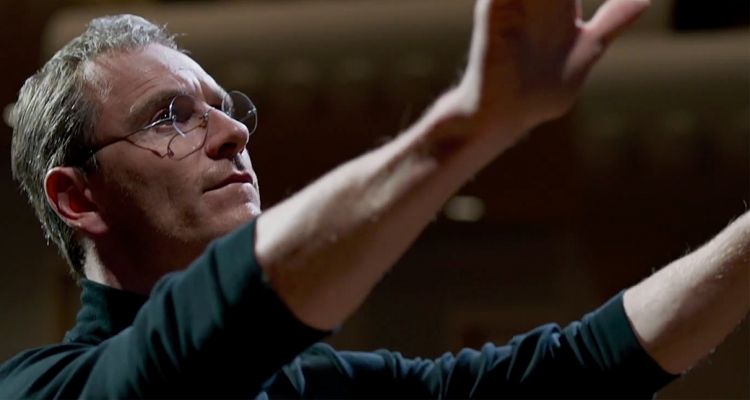 STEVE JOBS (USA/15A/122mins)
Directed by Danny Boyle. Starring Michael Fassbender, Kate Winslet, Seth Rogen, Jeff Daniels, Michael Stuhlbarg, Katherine Waterston.
THE PLOT: Over the course of 16 years, Steve Jobs (Michael Fassbender) goes from the shining star of Apple, to being fired after the failture of the Macintosh, to back where he started as head of the company. In the meantime, he fights the idea that he is the father of Lisa Brennan, pushes away those who have helped make Apple great, and rejects the father figure he sees in mentor John Sculley (Jeff Daniels).
THE VERDICT: With screenwriter Aaron Sorkin behind the script for ‘Steve Jobs’, it is fairly obvious that this is not going to be a hagiography of the man who brought us the iPod, iPhone and iMac, but instead tries to tell the story of just how Jobs became so powerful and successful.
Michael Fassbender is strong in the leading role, having no trouble making Jobs defiant, argumentative and more than a little unlikeable. As the film progresses and Jobs begins to grow and change as a person, these changes are evident, but Fassbender always makes sure that Jobs is the same person deep down. Kate Winslet – fluctuating accent aside – is engaging as Joanna Hoffman, Jobs’ confidant and the woman who consistently challenges him. The rest of the cast is made up of Seth Rogen, Jeff Daniels, Michael Stuhlbarg and Katherine Waterston, but since most of the film is made up conversation, arguments and confessionals between Winslet and Fassbender, they have significantly less to do, other than to challenge Jobs from time to time.
As mentioned, Aaron Sorkin seems to have been at pains for his screenplay to show Steve Jobs not just as the man who put amazing technology in our pockets, but a fully rounded and flawed human being. Showing the change – as well as the lack of change – that the character goes through, simply by focusing on three days of his life, with some flashbacks for good measure, gives the audience a feel for the person Jobs was, and the changes he went through as he got older and more successful. The most interesting relationship is, of course, with Joanna Hoffman, and there are some wonderful scenes between the two characters, including a gentle reversal of power toward the end of the film.
Director Danny Boyle manages to keep the story moving, even though it is told in relatively short amounts of cinematic time, and makes sure that the film is as much about Steve Jobs the person as the technology he has created. There is an incredible story arc for the character that is not hammered too hard, but there are times when the squabbling and the arguing feels more like an episode of a TV show than a cinematic event. As well as this, although the framing device of setting the film backstage of three of Jobs’ most important shareholder addresses is a clever one, it does begin to feel claustrophobic, and although we learn a lot in very little time, at times there is a feeling that a wider story could have been less cluttered.
In all however, ‘Steve Jobs’ feels like an accurate portrait of the man behind Apple Computers. The fact that the film doesn’t try to show him as an entirely sympathetic character is refreshing and although it ends before Jobs’ biggest successes – the iPod, the iPhone and the iPad – the film still feels complete in telling Jobs’ story.
RATING: 4/5
Review by Brogen Hayes