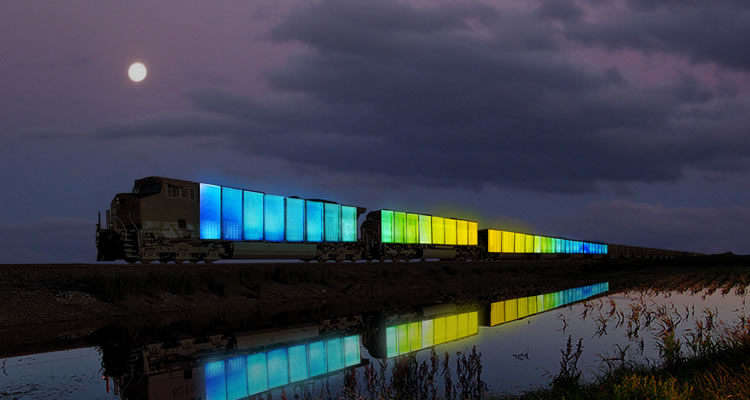 STATION TO STATION (USA/IFI/71mins)
Directed by Doug Aitken.
THE PLOT: Over the course of 24 days, a train full of artists from various disciplines crossed the continental US from the Atlantic to the Pacific. The journey covered 4,000 miles, and had 10 stops – or ‘Happenings’ – along the way.
THE VERDICT: There is little inherently wrong with the concept for Station to Station, but the trouble is that a mish mash of 62 one minutes films simply doesn’t feel like it belongs in a cinema. I am all for experimental documentaries, but other than some nice shots of the train, and some incredibly short interviews with artists and musicians, there is very little going on in Station to Station, and certainly not enough to hold the audience’s attention for 71mins. Instead, Station to Station feels as though it belongs as an art installation in a museum; it is nicely shot, but ultimately too fragmented to hold audience attention.
There are good things in STATON TO STATION, but they pass by the screen so quickly – much like a train passing through a station – that they are almost impossible to catch onto and ponder. As well as this, the entire film feels rather self indulgent, and spends most of the journey looking inward at the artists on the train, rather than outward at the beautiful country they are passing through and, the affect that art can have on the world as a whole. In this way, STATION TO STATION changes from a meditation on creating, to a self indulgent look at what people can achieve on a train.
In all, there is a good idea at the heart of STATION TO STATION, but a straight foward documentary could possibly have done the journey better service than 62 one minute films, which end up making the film feel self indulgent and fragmented.
RATING: 1.5/5
Review by Brogen Hayes