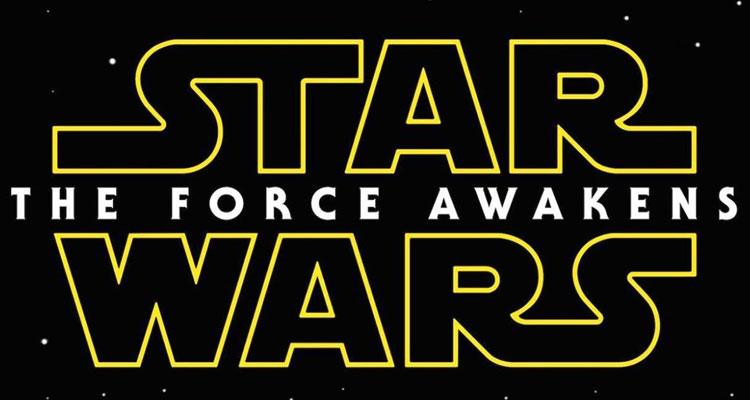 STAR WARS: THE FORCE AWAKENS (USA/12A/135mins)
Directed by J.J. Abrams. Starring Harrison Ford, Daisy Ridley, John Boyega, Oscar Isaac, Carrie Fisher, Adam Driver, Mark Hamill, Peter Mayhew, Domhnall Gleeson, Kenny Baker, Max von Sydow, Anthony Daniels.
THE PLOT: We’re back to the future of that original trilogy, picking up 30 years after 1983’s ‘The Return Of The Jedi’ ended. The Galactic Empire has regrouped as the First Order, and are keen to find the missing Luke Skywalker (Hamill) before the Rebel Alliance. After Leia (Fisher) sends the Resistance’s best pilot, Poe Dameron (Isaac), to Jukka as an old Jedi (von Sydow) there has a map to Luke, the First Order arrive soon after, led by Kylo Ren (Driver), who seems to be struggling with his Vader issues. With the R2-D2-esque BB-8 escaping with the data, the little robust robot is soon taken under the wing of scavenger Rey (Ridley) – who, when rogue storm trooper FN2187 (Boyega) comes crashing in, quickly becomes aware of just how sought-after her spherical new friend is. That’s when the First Order are soon blowing her hometown to smithereens.
And that’s just the first 10 minutes…
THE VERDICT: So, Elvis has re-entered the building, ready to sing all his old hits with slightly new arrangements. But, hey, can the boy still deliver? F**k, yeah.
There is much to love about the new ‘Star Wars’, a film that is laden with enormous expectation but yet still manages to be beautifully light on its feet. From the gold-plated opening titles to the comforting cast of scavengers, scalliwags and smirking space cadets, ‘The Force Awakens’ is thrillingly familiar. Then again, it does have a whole cast of iconic characters to call upon, with Ford returning like a favourite uncle thought lost at war. For her part, Fisher – the sweetly mad auntie – looks a little photo-shopped, and suspiciously like a shaved Ewok, but the smiles for her old partner-in-crime seem, touchingly, genuine.
Even the plot of The Force Awakens echoes many of the famous twists and turns of that towering 1977 debut. Abrams has taken the wise approach of pretending that those dreadful Lucas-led ‘Star Wars’ prequels never happened. So, let’s all just forget them. Just as we should the Matrix and Hangover sequels, and anything Russell Crowe has done since 2003.
Lucas hasn’t felt the Force for a very long time, his nerve and his flair for entertaining a crowd abandoning him pretty much from the moment he had something to live up to. That the perfect bastard child of Lucas and Spielberg should reignite the ‘Star Wars’ world so convincingly here – just as he had done with ‘Star Trek’ in 2009 – has the definite sense of a torch being passed. Raised on blockbusters, Abrams may lack the cinematic education and aspirations of the once-hungry George and Stevie, which leaves Jeffrey Jacob -like so many of this generation’s style-over-content filmmakers – in need of someone else’s original idea to work his crowd-pleasing magic on.
Which goes some way to understanding why ‘The Force Awakens’ is pretty much a Greatest Hits album, delivering all the icons and nods to Star Wars history in a plot that pretty much hits the ground gunning. That we get to meet shiny new versions of some of those icons – Star Wars: The Next Generation, as it were – makes this feel like much more than just a nostalgia trip though. You walk out of ‘The Force Awakens’ wanting to know what happens to these characters, Abrams’ decision to cast Really Good Actors here proving yet another Really Smart Move.
That early, intoxicating ‘Star Wars’ mix of ‘Flash Gordon’ and Freud is strong in this one, ‘The Force Awakens’ once again dealing with fathers and sons, family and home, chosen ones, and of how the darkest souls are usually the most frightened. And it unfolds with all the hoped-for crash, bang and wailings of an RZ-1 A-wing interceptor.
So, is the future biggest box-office hit of all time actually any good? In truth, there are men, women, children and dogs out there who would happily pay to see two hours of Jar Jar Binks sparring with Conor McGregor, never mind a smart, funny and loving sequel worthy to sit beside the original trilogy.
In short, ‘The Force Awakens’ is the droid’s bollox.
RATING: 5/5
Review by Paul Byrne

STAR WARS: THE FORCE AWAKENS (USA/12A/135mins)
Directed by J.J. Abrams. Starring Harrison Ford, Daisy Ridley, John Boyega, Oscar Isaac, Carrie Fisher, Adam Driver, Mark Hamill, Peter Mayhew, Domhnall Gleeson, Kenny Baker, Max von Sydow, Anthony Daniels.
THE PLOT: Thirty years after some plucky rebels and a gang of Ewoks defeated the Evil Galactic Empire, the tales of Han Solo, Princess Leia, Luke Skywalker and Darth Vader have faded into legend. A new evil force in the form of The First Order threatens the peace of the galaxy and although the resistance led by General Leia (Carrie Fisher) search, they cannot find Luke Skywalker (Mark Hamill), who has vanished. When she hears of an old ally finding a clue to Skywalker’s whereabouts, Leia sends one of her best pilots, Poe Dameron (Oscar Isaac) to retrieve the information. It’s not long before Kylo Ren (Adam Driver) and The First Order arrive to also retrieve the information, and when Dameron is captured, it is up to his droid BB-8 to keep the vital information safe, and get it back to the resistance.
THE VERDICT: It is hard to remember a film that was so talked about, hyped and secretive than ‘Star Wars: The Force Awakens’, and the day that fans get to see what has been done with our favourite cast of space opera characters since George Lucas removed his hands from the controls has finally arrived.
The cast, led by Daisy Ridley and John Boyega are almost universally strong in their roles. There are plenty of familiar faces and voices – Harrison Ford, Anthony Daniels, Kenny Baker, Carrie Fisher and Mark hamill – and tons of new ones for fans to fall in love with and theorise about, including Daisy Ridley as Rey, John Boyega as Finn, Adam Driver as Kylo Ren, Domhnall Gleeson as General Hux, Oscar Isaac as Poe Dameron and plenty plenty more. Isaac brings humour and irreverence to his role, Daisy Ridley is filled with pluck and fight, Adam Driver is menacing and sets up some conflicting emotions for later films and John Boyega makes Finn a character who brave and strong. The only minor blip on the radar is Domhnall Gleeson who, despite a wonderful track record of strong performances in strong films, hams it up just a touch too much – if such a thing is possible.

Screenwriters Lawrence Kasdan, J.J. Abrams and Michael Arndt wisely ignore the prequel films and keep the nostalgia trained on the original trilogy. ‘Star Wars: The Force Awakens’ brings in the best of those films – the humour, the action and the emotion – then turns its attentions to the story at hand, with one eye on the future. There is plenty to laugh at here, with some of the dialogue being wonderfully cheeky, but sparse enough that things are not laboured to death. The Galactic Senate, this ain’t; things are done, not talked about, and this is what makes the film so thrilling.

Cinematographer Daniel Mindel may well be the MVP of Star Wars: The Force Awakens, with stunning shots of our world changed just enough to make them feel alien. Colours are rich, but scale really plays a part in the look of the film, with human and alien life often swallowed up by the vastness of the land and sky, giving a sense of just how huge this Star Wars universe really is. As well as this, since the original look of the franchise was designed in the 1970s, this is kept in this new sequel, giving the entire affair a delightful mix of retro-futurism and nostalgia. The effects for much of the film are practical, rather than CGI, and this gives the world a tangible, real feel, unlike the prequel movies.
As director, J.J. Abrams brings a sense of fun, nostalgia and adventure to ‘Star Wars: The Force Awakens’. The film clocks in at 135 minutes but, other than a slight lag somewhere in the middle, the film is well paced and filled with tension. The set pieces are thrilling and gripping, the dialogue never swamps the film and characters are given enough time to grow and develop, without this swallowing the film whole.

In all, Star Wars: The Force Awakens is exactly the film we have been waiting for since ‘Return of the Jedi’, and it is one that fans can truly be excited about. Other than this being a great Star Wars film, it is simply a great film; well paced, well written and beautifully shot. There are some lags in the middle, and some cast members are stronger than others, but the set pieces are thrilling and the set up for the rest of this new franchise are there. What more could we want?! The Force is strong with this one indeed.
RATING: 4.5/5
Review by Brogen Hayes

5
The Force Is Strong