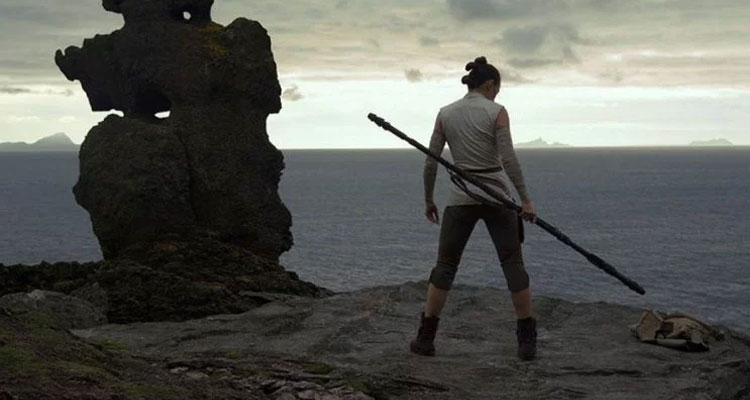 STAR WARS EPISODE VIII: THE LAST JEDI (USA / 12A / 152 mins)
Directed by Rian Johnson. Starring Mark Hamill, Daisy Ridley, Adam Driver, Carrie Fisher, John Boyega, Oscar Isaac, Domhnall Gleeson, Andy Serkis.
THE PLOT: In destroying Starkiller Base, the General Leia Organa (Carrie Fisher)-led Resistance has won the first battle but not the war. The First Order is now in hot pursuit, with Supreme Leader Snoke (Andy Serkis) intent on crushing the Resistance by using the dark potential of his new weapon – Kylo Ren (Adam Driver). The key to either victory or defeat for both sides lies in the last Jedi, Luke Skywalker (Mark Hamill). Rey (Daisy Ridley) has tracked him down to his hermit existence on a remote island. Convincing him to re-join the fray will not be easy. Having lost former pupil Kylo Ren to the Dark Side, Luke thinks it’s time for the Jedi to end. But there is hope…
THE VERDICT: After a 2-year wait that felt longer than a carbon-freezing session, it’s finally here. ‘Star Wars Episode VIII: The Last Jedi’ builds upon the solid, revitalising foundations laid down by J.J. Abrams in ‘The Force Awakens’. Not an easy task for ‘Brick’ and ‘Looper’ director Rian Johnson, but he’s picked up exactly where Abrams left off. The result is an exhilarating, breath-taking film that deepens the plot, characters and potential direction for Episode IX, which will see Abrams return again to the director’s chair.
If there’s one line that sums up this film, it’s the one spoken by Leia and then echoed again by Poe (Oscar Isaac) – ‘we are the spark, that will light the fire that’ll burn the First Order down.’ It’s a film about small steps to much bigger ones, a middle chapter in a trilogy which has its own particular angle but with a firm view on the end goal for all its characters. In that sense, it echoes ‘The Empire Strikes Back’ but it’s important to state that it’s not a remake or a soft reboot.
There’s a recurring theme in ‘Star Wars’ that one trilogy will echo a previous trilogy (e.g. Episode III echoes the events of Episode VI). Johnson’s script is reverent to what came before, pushing forward the idea of multi-generational conflict over the Force trickling down through the genes. We can see this most obviously in the developing stories of Rey and Kylo, both of whom face major challenges in this film.
Rey’s growing discovery of the potential Force within her is contrasted with Kylo’s inner conflict to follow in the heavy footsteps of his grandfather, Anakin Skywalker. Ridley and Driver do outstanding work with their characters, both physically and psychologically. Of course, their story is tied to that of Luke’s, which is equally involving and satisfying. To say anymore would enter spoiler territory, but it’s enough to state that Hamill slips back into the role with a firm sense of purpose. Skellig Michael and other locations along the Wild Atlantic Way look spectacular too.
‘The Last Jedi’ is the longest ‘Star Wars’ film to date, but it zips by in a flash with a lot to take in and absorb. Johnson stages some terrific action set pieces around the Resistance, beginning with a good old dogfight in space and some choice sneering by General Hux (Domhnall Gleeson). The action later moves to the rich trading planet of Canto Bight, but this is one of the film’s few weak links. With a great sense of urgency in the plot, this comes across as an unnecessary digression. This is only compounded by a certain character who doesn’t add much to the story in the end (no fault to the actor in question).
As the film draws to a close, there’s a sense that Johnson may have used up too much plot – but that may be deliberate in narrowing the focus for what’s yet to come. His controlled direction is without question though, as he has delivered on all fronts. No wonder Disney have rewarded him with a new trilogy to develop. With a dedication to the late Carrie Fisher, ‘our Princess’, there’s a sense of poignancy, of time passing in this series. It’s in very safe hands though with guardian Kathleen Kennedy using the Force to guide it to exciting new heights. The spark has lit the fire and ‘The Last Jedi’ is a blazing triumph.
RATING: 4.5 / 5
Review by Gareth O’Connor