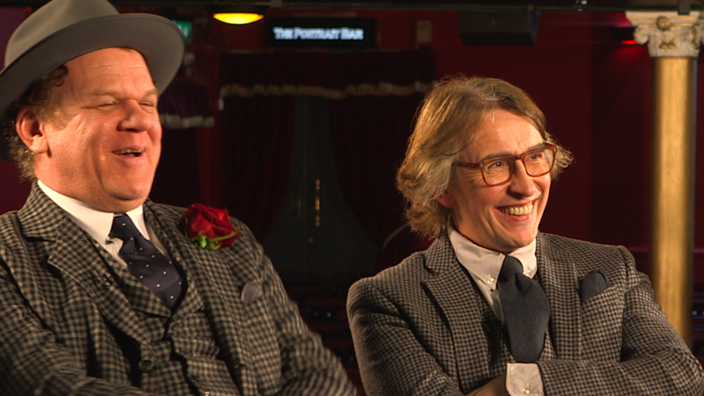 Interview with actors Steve Coogan & John C Reilly who play Laurel & Hardy in new movie Stan & Ollie… They’re joined on stage by director Jon S. Baird on stage at the Olympia Theatre in Dublin, one of the last places the comedy duo ever performed.

STAN AND OLLIE is now showing in Irish cinemas!


“Well, here’s another nice mess you’ve gotten me into!”

Stan Laurel and Oliver Hardy are widely regarded as the greatest comedy partnership in movie history. Between 1927 and 1950, they made over 107 film appearances (32 silent short films, 40 sound shorts, 23 features, 12 cameos), defining the notion of the double act with infectious chemistry and hilarious routines that seemed effortless but were honed down to the finest detail. The pair were part of the very few silent stars to survive and thrive in the sound era, adding wordplay to their comedy mastery, “You can lead a horse to water but a pencil must be led,” quips Stan in BRATS. Their influence goes way beyond cold stats and film buff analysis having amassed a huge and devoted international fan base, three museums and an appreciation society, Sons Of The Desert. Beloved the world over – in Germany, they are Dick Und Doof, in Poland Flip I Flap, in Brazil O Gordo e o Magro – they are a gateway to comedy, a passport to a world of sublime silliness and everlasting friendship. Whether you know them from TV reruns, cartoon adaptations or a Twitter gif, just to hear their theme tune, The Cuckoo Song, is not only a guaranteed smile, it’s a time machine to a more innocent age. People admire Chaplin, sit in awe of Buster Keaton but they love Laurel and Hardy. There is a hardly a comedian alive who hasn’t been influenced by Laurel and Hardy, their reach is long.

ABOUT THE MOVIE
Laurel & Hardy, the world’s favourite comedy double act, set out on a variety hall tour of Britain in 1953. Diminished by age and with their golden era as the kings of Hollywood comedy now behind them, they face an uncertain future. As they start crisscrossing the country, attendances are disappointingly low. But they’ve always been able to make each other laugh and as the charm and beauty of their performances shines through their audiences laugh too, and they re-connect with legions of adoring fans, old and new.   The tour becomes a hit, but Stan & Ollie can’t quite shake the spectre of Laurel and Hardy’s past; and long buried ghosts, coupled with Oliver’s failing health, start to threaten their precious partnership. A portrait of the most tender and poignant of creative marriages begins to unfold as the duo, aware that they may be approaching their swan song, try to rediscover just how much they mean to each other. Video interview by Cara O’Doherty for www.Movies.ie