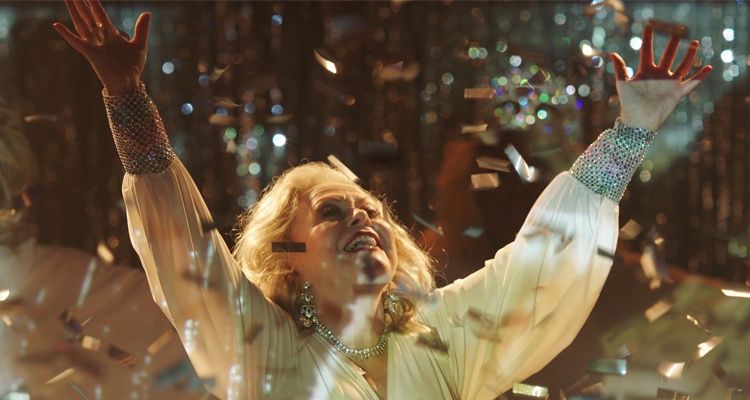 The Plot: Deep in rural Texas, church choir director Maybelline (Jacki Weaver) gets a call from San Francisco. Her estranged son has died in dramatic fashion – while performing at a drag club. Not having spoken to him for years, Maybelline nevertheless makes the journey to San Francisco where she discovers her son’s lifestyle just being himself. She bristles with the club’s co-owner Nathan (Adrien Grenier), who also happened to be her son’s partner. With the club left in the will to her as the surviving relative, Maybelline must now put aside her conservative values and embrace the colour, glitz and flamboyance of her troupe of lip-syncing characters…

The Verdict: One can imagine new release Stage Mother being positioned as post-lockdown cinema viewing. Having being picked up at the (virtual) Cannes market recently, it appears to have the kind of upbeat albeit unrealistic tone that one would expect of a film like this. A fish-out-of-water element mixed in with the lively, rainbow-coloured San Francisco drag queen scene. Add in a two-time Oscar-nominated Australian actor and it should be the sparkling recipe for a wild night out at the cinema. The Birdcage this is not though. Sadly though, Stage Mother is a real drag throughout and lands itself firmly in the iffy category.

As is often the case, the blame lies mostly in Brian Hennig’s uninspiring script. It tries to position itself early on as a clash of two opposing forces, with the memory of a departed son / co-worker hanging in the balance. That underlying tension is hinted at in the prickly relationship between Maybelline and Nathan, with the latter apparently having absorbed all of his partner’s issues with Maybelline and then spewing them out as if they were his own. This makes for ostensibly engaging drama and a frosty relationship thawing out over the running time, with Weaver and Grenier doing what they can with their thinly-written characters. However, Hennig conveniently sidesteps / gives up on these character issues and instead goes down a more predictable route by shifting the focus around to less interesting character dynamics.

With a flat script to work with, director Thom Fitzgerald doesn’t fare much better. His workmanlike direction tries to pump some life into the script but he doesn’t succeed. There’s little story momentum, other than suggesting that Maybelline is just the ticket to get the show on the road again. This leads to a big put-on-the-show sequence towards the end which clumsily tries to amalgamate the themes of the film. It all comes across as fake sincerity, as the onstage drama gives way to the kind of yawn-inducing acceptance that will have viewers looking at their watches. Given a seriously under-used Lucy Liu and a fabulous cast of drag queens (including Mya Taylor from the brilliantly trashy Tangerine), this really should have been a lot more raucous fun for the audience.