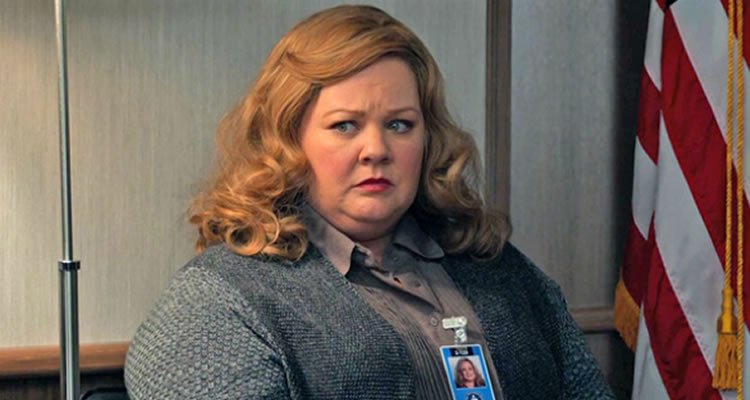 SPY (USA/15A/119mins)
Directed by Paul Feig. Starring Melissa McCarthy, Jason Statham, Rose Byrne, Miranda Hart, Bobby Cannavale, Allison Janney, Peter Serafinowicz, Morena Baccarin, Jude Law.
THE PLOT: Susan Cooper (McCarthy) just might be getting tired of being the CIA’s top analyst, of sitting in front of a bank of screens and being the navigator for the cool agents out there fighting crime. Especially when those agents out in the big bad world keep messing up. Putting herself forward as an unlikely Janice Bond, Susan can certainly talk the talk, given her years of virtual combat, but can she walk the walk. A real concern, given that she’s not exactly at the peak of fitness. Still, big cheese Elaine Crocker (Janney) has faith in this plucky little chicken, and so the unlikely DD7 is sent to observer and report on cunning arms dealer Rayna Boyanov (Byrne), her undercover work hampered somewhat by a jealous rival agent (Statham), an Italian loverboy with a fondness for chubbies (Serafinowicz), and a pencil-pusher navigator (Hart).
THE VERDICT: It’s a relief to see the highly likeable and downright huggable Melissa McCarthy lead a genuinely likeable and huggable movie once again, given her post-BRIDESMAIDS disasters IDENTITY THIEF, THE HEAT and TAMMY. Reunited with Bridesmaid director Paul Feig for a second time – after THE HEAT – McCarthy finally gets to have some real fun here, going full Fanny English as the spy who really knows too little.
Aided and abetted by some stock English cartoons – played by Jude Law, Jason Statham and Miranda Hart – the Americans (especially Janney and the always-reliable Rose Byrne) keep up their side of the bargain. A hoot. As they say in England.
RATING: 3/5
Review by Paul Byrne

Review By Paul Byrne
3
A hoot!