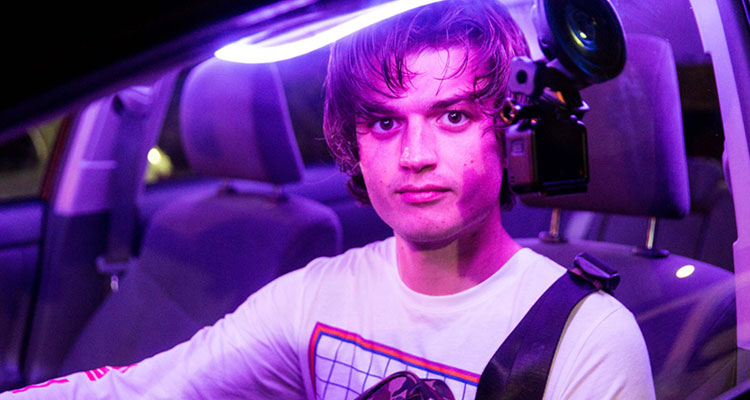 Kurt (Joe Keery) is a rideshare/cab driver in Los Angeles on an app called Spree. He desperately wants to be a social media star, but his content isn’t exactly thrilling. Until he decides to start drugging and killing his passengers on camera for online fame. ‘Spree’ opens in Irish cinemas this weekend.

Would you say that Joe Keery’s character is inspired by Christian Bales performance in ‘American Psycho’?
There were specific movies that I showed to the cast like ‘King of Comedy’, like ‘Network’, like ‘A Face in the Crowd’. There are other characters that I thought of for Kurt, characters from movies like ‘Made in Britain’. Just people who are relentless in their twisted ideology. There’s a movie I like called ‘Coming Apart’, it’s a Rip Torn movie where he’s a psychiatrist with all these hidden cameras. We showed ‘Man Bites Dog’. It’s a mockumentary where they follow around a serial killer.

I see ‘Spree’ as a film that makes fun of films like ‘American Psycho’ because Kurt is not cool. Kurt is not sexy. His whole M.O. is cringe.

In a particular scene, I felt that you were drawing inspiration from ‘American Psycho’.
With that we wanted to show at that point in the film he was becoming something else, he was going beyond the pale. The same as people who opt out of social media because they’ve opted out of society and are unable to survive. The whole thing is that Kurt is amoral rather than immoral because he’s naive. He’s not processing the violence as a problem because it’s under the rubric of sharing and a tutorial.

When did you know Joe Keery had it, that he understood what it meant to play Kurt?
Yeah he nailed it. he’s really good. Just from the earliest meetings, I knew that he was going to approach this character and this subject matter with sensitivity because obviously what I’m trying to do is make fun of this type of person who would use violence as a means to fame and he totally met me there but also added these layers of pathos and desperation and sadness to the character so you are laughing at him, you are horrified by what’s happening but also you kind of see yourself a little bit in Kurt and that’s the most horrifying thing of all where we acknowledge how social media can make us do things that inhumane and immoral because we’ve trained and brainwashed to want the attention on us.

When you were writing this with Gene McHugh where did the character of Kurt come from?
At first we wanted to skewer white/male/mass murderers. That happens a lot in America and I’ve never seen a film or a piece of art make fun of those peoples and I think because they are so driven by the attention you need to make fun of them.

I found this pairing of what these individuals want is what influencers want which is to be the centre of a narrative and there’s something kind of sick about influencer culture and how our own adherence to the rules of social media and so from there I thought we need to synthesise those two types of people and that is what Kurt comes from.

So Eugene, what do you hope audiences learn from this film?
I hope people are entertained and they laugh and feel all the feelings especially shocked and scared. I’d hope they enjoy the ride because I do think it’s a fun movie and then when it’s over maybe they can step away and talk about it with whoever they watched it with and just reflect on their own relationship with social media because I think we need to scrutinise that more because it completely runs our lives. We virtualise ourselves in a really frightening way so I think the movie is a good jumping-off point for people to think about that.