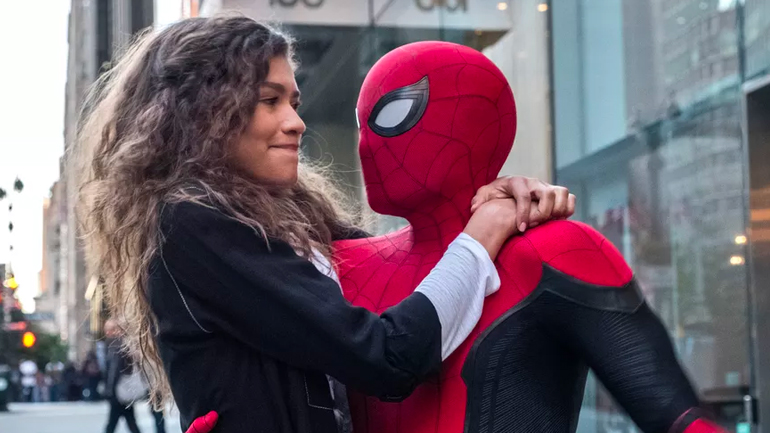 The Plot: Having lost a close friend, Peter (Tom Holland) is trying to find a new direction in his life as the friendly neighbourhood Spider-Man. He’s also building up courage to tell classmate MJ (Zendaya) how he really feels about her. When Nick Fury (Samuel L. Jackson) calls and wants his help in dealing with a situation, Peter decides that he really needs a break. He heads to Europe with his class for a holiday that starts in Venice. When there, a creature known as an elemental breaks loose and causes havoc. Peter improvises, but he receives unexpected help from a new supehero – Quentin (Jake Gyllenhaal). He’s from a parallel Earth that was destroyed by these same elementals. Dubbing him Mysterio, Peter looks up to him. Saving the world with Mysterio may involve exposing Peter’s true identity – something which he has to avoid at all costs…

The Verdict: Following hot on the smoking trail left by the outstanding Avengers: Endgame comes the last film in Marvel’s Phase 3 of their cinematic universe. Spider-Man: Far From Home is the flipside to the dizzying, universe-exploring antics of Endgame. Instead, it’s exactly what is needed right now – for both the characters and the audience, still reeling from the shockwaves. It’s a light, frothy and action-packed rollercoaster ride that hops around more European cities than James Bond, while introducing a new superhero that might just be the next big thing. It also builds upon the groundwork laid down in Spider-Man: Homecoming to suggest that Peter is maturing from a naïve teenager into a confident young man.

Returning director Jon Watts has settled into the material quite confidently at this stage. He knows when to poke fun at Peter’s awkwardness at the right moments, such as some embarrassing moments with his classmates and the clued-in MJ. He also knows when to give Peter those joyful, heroic moments that suggest a clear thought process behind his character arc – as both a teenager dealing with superheroic identity issues and his inner feelings for someone special. The script by Chris McKenna and Erik Sommers is smart in that respect – the superhero angle is just one aspect of who Peter is, rather than the whole. Once again, Holland nails the boundless optimism and force for goodness that is Peter Parker and your friendly neighbourhood Spider-Man.

That brings us to his developing friendship with Mysterio, played with note-perfect delivery by an engaging Gyllenhaal as an older-brother figure. It develops over the course of the film. If you’ve been paying attention earlier on then it’s not too hard to figure out what happens next. This is the film’s most predictable element, with McKenna and Sommers guilty of lazy plotting to get characters from A to B to C (a gag that is repeated with varying degrees of success). Marvel, in association with Sony here, would normally be expected to avoid such obvious plotting – especially when there was a chance to do some of their trademark daring and experimentation rather than play it safe. While there are surprises here, there isn’t anything of the level of, say, ‘the car scene’ from Homecoming.

Safe is fine though. Watts directs with a steady hand, while keeping the story visually interesting with his multiple locations which include Venice, Prague and London. Thankfully, there are no snide in-jokes about Europeans being different to Americans. If anything, it’s the other way around. The welcome addition of Happy Hogan (Jon Favreau), bumped up to a sidekick role, brings a nice line in humour too. There’s a good sense of movement and energy to the film too, which doesn’t try to be anything more than just straightforward summer blockbuster fun. As the score rises and then dips into two end credits scenes, Spider-Man: Far From Home is pretty much what you’d want from a Marvel Cinematic Universe film. If Peter’s new spidey sense, dubbed ‘Peter Tingle’ by Aunt May, is correct then this frequently funny and enjoyable webspinner should go down well with the fanbase and general audiences alike.