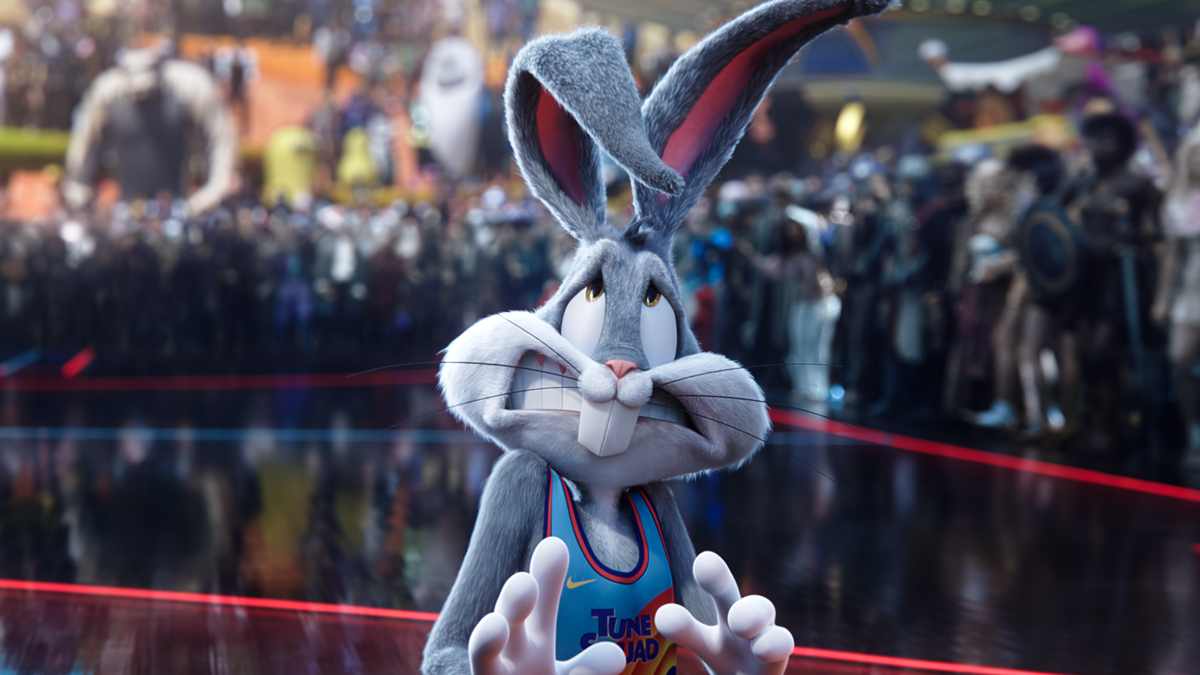 The Plot: Ace basketball player LeBron James (himself) is approached by top brass at Warner Brothers to digitally scan himself in for all manner of studio franchise potential. He’s not impressed, to the disappointment of his son Dom (Cedric Joe) who is an avid videogame fan. It doesn’t matter anyway. Rogue artificial intelligence Al (Don Cheadle) interferes and transfers him, Tron-style, into the wacky world of Looney Tunes for an epic game of basketball. LeBron puts together a crack (and cracked) team of characters from the Looney Tunes universe, headed by Bugs Bunny. Meanwhile, Al encourages Dom to put together his own ultimate team. Let the game begin…

The Verdict: Here’s an unexpected surprise – a sequel to the 1996 film Space Jam, which tag-teamed towering basketball player Michael Jordan with one Bugs Bunny. Combining live action with animation is a tricky artform, but when done well it works. And so it did, but a mooted sequel in the late 1990s was sent off the court and onto the bench. Technology has improved in leaps and bounds since then, prompting a nostalgic revisit for the filmmakers but with a snazzy do-over and a new leading man to cartoonishly bounce about. That man is LeBron James, who is apparently the modern equivalent of Jordan. No need to worry about name recognition or an American sport like basketball not translating across the pond to international audiences. The filmmakers have described it as a standalone sequel and the basketball in it has been jazzed up to videogame effect.

In a sense, that’s what a large chunk of the film comes across as – a videogame with the controller firmly in the hands of director Malcolm D. Lee. The mother of all basketball games is to be played between a father and a son with colourful supporting characters backing them up to decide who is the ultimate champion. The basketball that’s played here is videogame-style, with power-ups and cheat codes but that’s a bit of a cheat itself. If you’re looking to to discover just how skilled James is on the court, then you might find it hard to keep up with the visuals. They frequently go into overload, overclocking this reviewer’s eyeballs as he became distracted by the vast crowd extras, sorry ‘background artistes’ (A flying monkey from Oz! The Night King! An assortment of Jokers!). Moving away from his broad romcoms Girls Trip and Night School, Lee tunes into the zany wavelengths of not only the Looney Tunes world but a vast library of characters from the Warner Brothers universe. Move over, Ready Player One.

The epic basketball game takes up the second half of the film, hence the drawn-out running time. It’s a lot of fun to watch, if somewhat exhausting as James and Bugs attempt a winning strategy against the nefarious Al and his freak squad. James makes a charismatic lead, but it’s clear that he’s not going to push Will Smith off his Hollywood perch anytime soon. James has presence but is too stiff and aw-shucks earnest to be taken seriously as an actor. He has fun with his image though. More visually and narratively interesting is the first half of the film, which mixes animation types to dazzling effect – Spider-Verse style. If you ever wondered how Speedy Gonzales would handle bullet time then this is it… or Lola Bunny (Zendaya) training with Wonder Woman to find her true self. One wishes that Lee had held on to that sane visual invention later on, rather than go down the standard CGI route for a predictable story of a father and son patching up their differences in a very different group therapy session.

Space Jam: A New Legacy is a looney tune of its own, throwing all manner of orchestrated, animated chaos at the screen and somehow managing not to make a rabbit stew out of it. It shouldn’t work due to the overarching effect of watching someone else play a basketball videogame onscreen for the second half, but it still works anyway due to the meta, wink-wink humour and crossover visual styles. Not quite a slam dunk, but a good shot that should entertain kids of all ages. That’s all, folks.Rating: 3 / 5