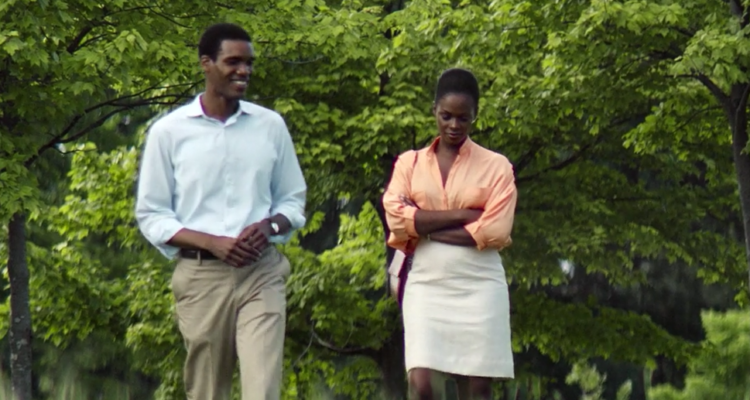 SOUTHSIDE WITH YOU (USA/12A/84mins)
Directed by Richard Tanne. Starring Tika Sumpter, Parker Sawyers, Vanessa Bell Calloway, Phillip Edward Van Lear, Taylar Fondren
THE PLOT: In 1989, Barack Obama (Parker Sawyers) and Michelle Robinson (Tika Sumpter) go on a date for the first time. Over the course of the day they spend together, they discuss, race, politics, art and ice cream, and begin to feel a connection growing.
THE VERDICT: ‘Southside With You’ is a strange sort of film. Chronicling the first date between Barack and Michelle Obama – or Robinson, as she was at the time – could be an interesting snapshot into the lives of African Americans in Chicago in the 1980s, but so much time is spent focusing on the fact that Barack smoked at the time, and Michelle’s objections that their meet up was not a date, that this dialogue-heavy film feels as though it is going nowhere.
Tika Sumpter is strong as Michelle Robinson; she makes the character tenacious and strong willed, and a character that the audience understands well. Parker Sawyers makes Barack a smooth talking young lawyer, who is already displaying his trademark charm, charisma and skill at orating. The trouble is that these two people, as President and First Lady of the United States of America, are so well known, their mannerisms and way of speaking so familiar to audiences around the world, that it is hard to tell whether Sumpter and Sawyers are giving strong performances or just imitating mannerisms seen on TV and social media.
Written and directed by Richard Tanne in his feature film debut, ‘Southside With You’ is a film that relies heavily on dialogue, and feels inspired in no small part by Richard Linklater’s ‘Before’ trilogy, as these two characters talk their way through their first date together; not only discussing life as African Americans in a society suffering racial stress, but their dreams and aspirations for life. This is all well and good, but since we know where this story ends up, ‘Southside With You’ ends up feeling like a film that foreshadows everything and tells the audience nothing, even though most of the running time is taken up with talking.
As director, Richard Tanne makes sure that the couple keep moving through their day, from lunch to an art exhibition to a community event that Barack speaks at, but this does not help to give the film a feeling of pace, and it often drags its heels. As well as this, even though Barack makes a point about ‘Good Times’ showing stereotypical African American families, the two spend a lot of time having conversations about race and aspirations that feel as though we have heard them before. The characterisations are good, but again, it is hard to tell whether these performances are imitation or acting.
In all, ‘Southside With You’ feels like a new version of ‘Before Sunrise’, starring two of the most well known people in Western politics today. It is hard to know who the film is aimed at, and there is a feeling that it was made either too late or too soon. There are some interesting issues raised about race, wealth and education throughout the film, but the discussions around these end up feeling familiar and vague.
RATING: 2/5
Review by Brogen Hayes