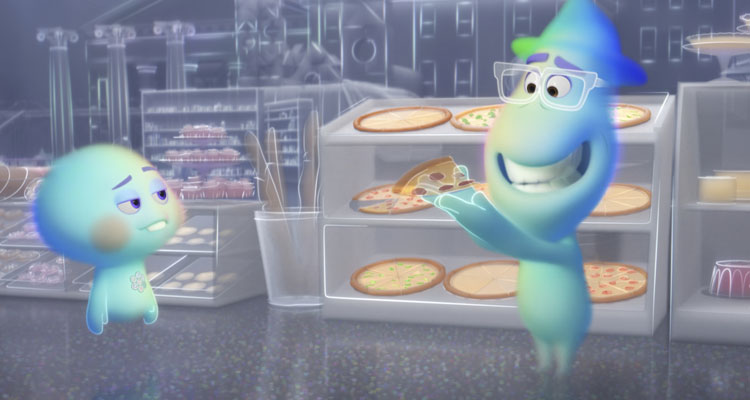 SOUL – Behind The Scenes with Pixar’s animators

Released exclusively to stream on Disney+ this week, SOUL is the latest film from Pixar. Completed in quarantine, SOUL is the story of Joe Gardner (Jamie Foxx) who is having the best day of his life, but finds his life tragically cut short. Determined to find his way back to Earth and his life, Joe finds himself in the Great Before, mentoring 22 (Tina Fey) a new soul who should be preparing for her journey to Earth, but is doing anything she can to dodge the journey and stay where she is. This unlikely duo must find a way to work together, protect each other and find their ways back to where they belong.

We caught up with story Supervisor Kristen Lester and Story Artists Michael Yates and Aphton Corbin to find out more about working behind the scenes on such an exciting project, what it was like for Pixar to set up a cultural trust to make sure they got the story of an African American leading character right, and where they drew inspiration from for the film’s magical world.

You are the story team for SOUL, can you tell us a little about what that entails?
Aphton Corbin: As the story team we all help craft the idea of Joe’s journey and also coming up with what the Soul World will look like, what Joe’s life looks like and basically crafted the story of Joe’s adventures.
Kristen Lester: Pixar does two things; we both write our stories with words and we write our stories with images, so we’re the image half of the writing and creation of the story. We do really simple drawings that illustrate the story and we send those to editorial, where they get cut together with sound and music, and then we sit in a room and we watch our movie. That’s how we know what we’re doing, we know where the story is going, and we do that over and over and over again – about eight or nine times – to really make sure that we get the story right.

SOUL had seven weeks left on production when the world went into lockdown, did that affect your end of the film at all?
KL: I think the story team was pretty much done on the team by that point. Story tends to wrap earlier on in the life of the production of the film. Also, story is by it’s nature… We work as a group collaboratively and then each one of us goes off individually and storyboards our sequence, so story artists have a lot more flexibility in terms of their ability to work as a group and their ability to work as individuals, so as far as the coronavirus is concerned we actually were pretty functional in terms of working from home.
AC: The one thing that we don’t get to do as a team afterwards is watch it together… Yet. We usually all get together and have our last hurrah and high five, and that’s been postponed. Actually, we haven’t seen the finished product either because of the coronavirus!

Michael and Aphton, you were part of the Internal Culture Trust surrounding bringing a leading African American character to life for the first time in a Pixar film, what was that like?
Michael Yates: It was brought together, a group of African Americans working at Pixar, and we would just sit in on certain meetings, character design, story reviews and give feedback about authenticity, and basically all facets of the film. It was the first time I was involved with something like that at the studio, and I felt like it was really, really helpful [to be] on the show as a story artist, and also being in that room and seeing the two halves of how things work.
AC: I think it was really helpful being on the story team and the cultural trust because it worked out, a lot of times, really helpful where it was like Joe’s character isn’t quite believable or likeable as a person and we can’t crack that” and then the cultural trust was like “Oh we don’t buy him, this is not what he would do”. Sometimes it would work out really perfectly where they would have some of the answers to help fill in the gaps, and we just worked back and forth in that way. Even some scenes were crafted that wouldn’t have been in there before, thanks to the help of the cultural trust, so it was really nice that they were brought in early on, and continued to be there for the longevity of the film.

Joe is the first lead African American character in a Pixar film, I think as children, we all related to characters more that looked like us; what do you hope kids and adults take from this?
MY: The thing I always think about is me being interested in animation as a little boy, and just hope they get inspired – even if they don’t want to do animation – just seeing yourself on the big screen can really inspire you, and just to show you exist. I am super excited for people to see it.

Joe’s father refers to jazz music as ‘Black improvisational music’ at one point in the film, and the impact that jazz has made in New York is very obvious. How did it feel to work on an animated film bringing this genre to the fore?
AC: I think that was something that the cultural trust and everyone else was really trying to make sure that we celebrate that this is the art form that Black people have brought to the United States, and how much pride there is in that, so we were really trying to be truthful with the music that we created. I think it was an amazing job, there are some amazing artists, and what a wealth of talent John Batiste is and having that be part of the film was extremely special.

The film looks and feels both really familiar and very unfamiliar. Did you draw inspiration for the two worlds in the film from anywhere?
KL: Oh man! From the mind of Pete Docter really! [laughs] At the beginning of this film we were like “OK, we’re gonna go to the Great Before, we’re gonna see how souls get their personality” and we were like “What does that even look like?! We have no idea”. It was a huge challenge. It was a huge challenge for both the story team and for the art team to come up with somewhere that we have never even imagined, we have never even been before. A lot of it, I know Pete drew a lot of inspiration from sound and from music. It was really an amazing collaborative effort between the story team – I know that Aphton contributed to that a lot – and the art team, to imagine this world that we have never imagined before. It was really awesome.
AC: I think one of the cool things about working on SOUL is, since it’s so abstract, Pete was very a part of having story and art work together in a really cool way.

There are times when the film feels really personal to the people working on it. What is it like to bring the story to life visually, then have to give it away?
KL: Oh man! It’s Pixar’s thing that we strive for authenticity, we strive for a feeling of truth. So we dig into our own lives to find times when we felt like we had a destiny, or we had something that we had worked really hard for and it didn’t work out, or that feeling that you have when you feel like you are doing the thing that you love. The really great thing about working at Pixar is that because everybody is in that conversation, there’s no fear or anxiety when it goes to the next stage or when you hand it off to someone else because everybody else carries the same value of authenticity and creativity, and everybody cares about what they’re making, so much so that I personally don’t worry about it.
MY: One example I can remember is the opening with the band class, and I remember working on that and thinking when I was in middle school band as a kid, I didn’t really enjoy the process of it. I wasn’t very good and it always felt like a chore, so I only did it for about a year, and it felt like such a blip in my life. Then this film comes around and I got to use all of that life lessons in that part. Then I felt like handing it on, everyone at the company is so good at their jobs that you just feel like it’s only gonna get better every time it goes down to a different department. I think the things that always excite me in movies are the things that feel super authentic and like they came from someone’s real life, so the idea of other people seeing that and relating to it is just the thing that keeps us going.

There is an idea in SOUL that new souls cannot go to Earth until they have found their ‘spark’ of talent, passion or skill. What would your spark be?
AC: I think we’re all still figuring that out in life, right? I don’t think I have one thing that I feel like I have come to this Earth to do – that would be really cool if I had that locked down! [laughs] I am enjoying working in animation for the time being! [laughs]
KL: For me, I would definitely say that mine is art. It doesn’t have to be specifically animation but art is the tool that I use to communicate, it’s the thing that brings me joy and frustration, but Aphton is right; the thing that makes you love your life and gives you meaning in life is so much more than just one thing.

Michael, do you have one big spark you are waiting to tell us?
KL: He’s gonna be like “Pancakes”!
[all laugh]
MY: I think it’s just storytelling and just making stuff. No matter what it is, I just like to make things and show people, and getting my feelings across to other people through art.

SOUL is available on Disney+ from December 25th 2020