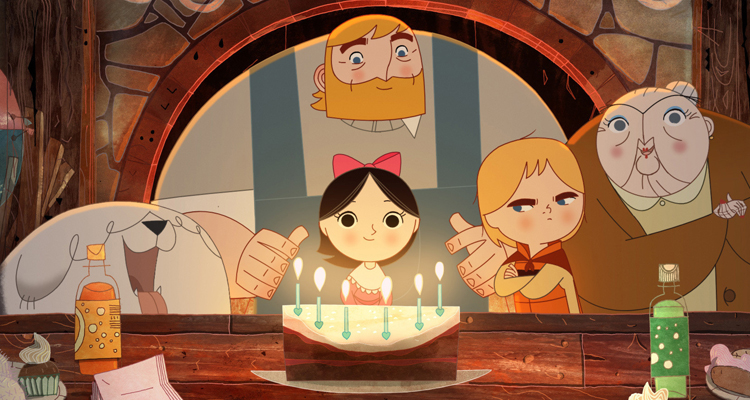 Song of the Sea

THE PLOT: Young Ben (voiced by Rawle) lives on a remote island off the coast of Ireland with his great, big, strong dad (Gleeson) and his annoying, irritating little baby sister, Saoirse (O’Connnell). She can’t speak; Ben reckons he can’t be heard. The main reason why Ben thinks his little sister is annoying and irritating though – other than the simple fact that she’s a girl – is that he blames her somewhat for the disappearance of their mother shortly after Saoirse’s birth. When Saoirse turns six, she finds a shell horn belonging to her mother, and it leads her a white fur coat, and into the sea – where, miraculously, the little girl turns into a seal. When the two siblings are sent to live with their grumpy grandmother (Flanagan) in the city, the sea keeps calling them, with a group of Faeries informing Ben that he must find that white fur coat again, so that his sister can sing the Song Of The Sea, and finally lead them home. And so the two young kids head out on an epic search…

THE VERDICT: As with Cartoon Saloon’s debut feature, 2009’s THE SECRET OF KELLS, there’s no denying the beauty of the animation in SONG OF THE SEA. And as we got into the Celtic mystic once again, there’s no denying the script lacks that certain kick. With a gameplan that’s far more Mayazaki than Mickey Mouse (MY NEIGHBOUR TORTORO, along with Mike Newell’s Into The West, were major influences here), this little Irish animation studio upstart is clearly happy taking the long road to success. It may mean that the profit margin on THE SECRET OF KELLS didn’t begin to trickle in until six years after its initial release, but for these Kilkenny cats, it would seem quality beats Quick Ratio casino cash-ins every time.
It’s an admirable approach, but it’s clear that Cartoon Saloon still have some way to go. The glowing reviews (especially abroad) and golden rosettes (the Oscar nomination, the recent IFTA for Best Irish Feature) help the brand, as does the meticulous, glorious 2D animation, but, as with THE SECRET OF KELLS, the script here would make John Lasseter punch a limited edition Plush Buzz Lightyear Pez Dispenser. That potent mix of slapstick and soppiness that Pixar (and, lately, the Lasseter-led Disney) manage so well – the quick-fire wit, the winks to the audience, the punch to the gut – are largely absent here, and you end up with a film that parents would like their children to love. Rather than a film that children would simply love. Less Klimt, more Krusty The Klown. Still, there’s a good message here – never trust your granny. Ever.

Watch the Song Of The Sea Trailer