The Plot: Having watched his father being murdered at a young age, Snake Eyes (Henry Golding) has grown up with vengeance in his heart. After falling in with the Yakuza, he’s rescued by Tommy (Andrew Koji) who spots a talent for stealth and cunning that can be nurtured. Tommy is the leader of the Arashikage clan and is due to take over as the leader in due course. He takes Snake Eyes to Tokyo to test his skills in three challenges. Head of security Akiko (Haruka Abe) is suspicious of Snake Eyes’ shady past though – something which comes into play when a rival clan tempts him to betray his newfound family…

The Verdict: Franchise films based on toy lines can have their ups and downs, like a toy gradually running out of battery power. In the case of Transformers, it went progressively downhill from the second film until Bumblebee put in some fresh batteries and lifted it back up again. The Hasbro G.I. Joe toy (or Action Man as he was known over here) had its first blockbuster start in 2009 and another film followed in 2013. Both of which were dimly-remembered, disposable summer fluff – the kind that you buy popcorn for and then dis-engage your brain for two hours. Given that trajectory, it would be anticipated that the latest entry Snake Eyes: G.I. Joe Origins is doomed to disappoint. Actually no. There’s something else at work here in this soft reboot of the franchise that is more thoughtful and engaging than before. Just about though.

This film is an origin story surrounding the popular character of commando Snake Eyes, previously played by Ray Park of Darth Maul fame. Here, the role is recast with Henry Golding to fit in with the strong Asian flavour of the film and presumably to have more representation now that that conversation is more prevalent – and justifiably so. The script by Evan Spiliotopoulous, Joe Shrapnel and Anna Waterhouse posits Snake Eyes as a loner, a ronin wandering from one fight to another seeking vengeance for his murdered father. He finds a master to serve under in a powerful Tokyo clan that prizes loyalty but he has to earn it first – the hard way. The shadowy Cobra organisation that will come to play a key part in the series makes a sinister entrance with a rival clan. The result is a battle between two rival factions with Snake Eyes caught like Akira Kurosawa’s Yojimbo before him in the crossfire.

At least, that’s the tone that Flightplan director Robert Schwentke appears to be aiming for, while still packaging it as a Hollywood franchise entry with all the bells and whistles that come with it. He succeeds in some respects and less so in others. The concepts of honour, loyalty and bravery is in keeping with Japanese culture and that gives the film a good grounding for Golding to work with before the mask eventually comes on. He maintains a certain coolness and stillness in the challenge scenes, contrasted with the amped-up action scenes on motorbikes, rooftops, hand-to-hand combat and swordplay. It’s bloodless for ratings reasons of course, but there’s still a hard edge to the violence that hints at a darker film. The film works better when it keeps the action real, less so when elements of mysticism and a potential doomsday device come into play that just add flash and bang but not much more.

After her star-making, kick-ass turn in Ready Or Not, Samara Weaving is a wasted opportunity here. She just pops up when the going gets tough, as if the screenwriters had an ‘insert Scarlett here’ marker in the script rather than making her a proper G.I. Joe character. The Raid’s kinetic Iko Iwais could have had more action and less pensive staring as well, but the main Japanese cast create a strong physical presence. Thankfully, there’s no stoic, hoorah American patriotism at play – thereby making Snake Eyes: G.I. Joe Origins more digestible to an international audience. It doesn’t try to be anything more than what it is. That being a step-up for the franchise with a different tone, but not something that will draw acclaim as a standout of the recovering summer box office. It’s content to work on its own terms and work it mostly does, but don’t expect anything more from this slightly above average Joe. 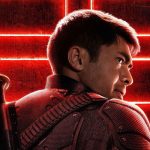 In short: Above average Joe