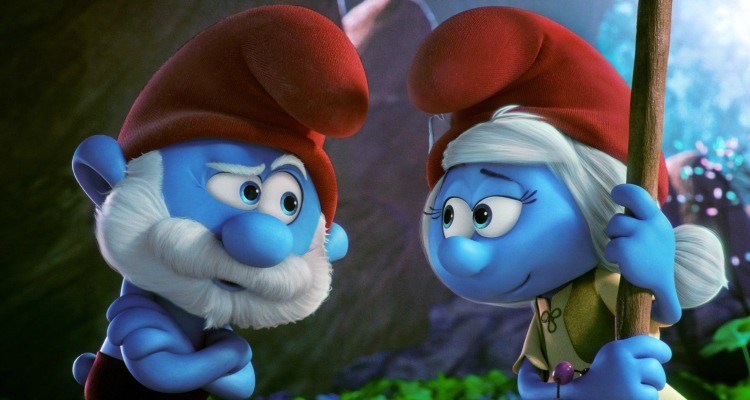 SMURFS: THE LOST VILLAGE (USA/G/89mins)
Directed by Kelly Asbury. Starring Ellie Kemper, Julia Roberts, Mandy Patinkin, Rainn Wilson, Demi Lovato.
THE PLOT: As Smurfette (Demi Lovato) struggles to find out what her purpose in life is, surrounded by Smurfs whose names tell them what they are good at, she discovers an entrance to a magical place in the Forbidden Forest. Meanwhile, Gargamel (Rainn Wilson) sets out to steal the magic from Smurfs, and when he hears there may be another Smurf village, Smurfette knows she must disobey Papa Smurf (Mandy Patinkin) to warn the Smurfs in the Forbidden Forest that danger is on the way.
THE VERDICT: Not quite a reboot of ‘The Smurfs’ franchise, but definitely a step away from the live action/animation combos of the past, ‘Smurfs: The Lost Village’ is obviously aimed at the youngest little ‘uns in the audience, and while the film looks good, there is little here for the older Smurfs fans in the cinema.
The cast of ‘Smurfs: The Lost Village’ is full of familiar names, including Demi Lovato, Michelle Rodriguez, Julia Roberts, Ellie Kemper, Mandy Patinkin, Rainn Wilson, Danny Pudi, Jack McBrayer and Meghan Trainor. It is clear that the cast are having fun with their roles in the film as it is gives them all a chance to be over the top and fun, but none of them really get a chance to make their characters anything more than their Smurf – and other – names might suggest.
Based on characters created by Peyo, and written for the screen by Stacey Harman and Pamela Ribon, ‘Smurfs: The Lost Village’ is full of gentle adventure and sweet affirmations for the little members of the audience, and there is enough danger to keep the plot moving and the audience rooting for our heroes to save the day. As well as this, it is obvious that the franchise wanted to introduce girl Smurfs to the mix, other than Smurfette, and this is what is achieved through ‘Smurfs: The Lost Village’.
Director Kelly Asbury makes sure that the voice performances are high energy and infectious, and the look of the film – particularly the magical kingdom beyond the wall – is bright, fun and cheerful. There are times, however, when the film struggles with pacing, and even though some gags and references to classic films – such as Back to the Future – are thrown in for good measure, this is not a film that is going to engross the adults in the room. As well as this, the use of slapstick and the physical animation of crashes and bangs makes ‘Smurfs: The Lost Village’ feel old fashioned and dated. The songs used are cheery and bright, although Blue (Da Ba Dee) by Eiffel 65 needs to be banned from Smurf films. Forever.
In all, ‘Smurfs: The Lost Village’ is bright and cheery film aimed at the littlest Smurf fans in the audience. The voice cast do fine, the film looks good and plays with the landscape of the Smurf world, but the film plays young and has nothing for anyone over the age of 10.
RATING: 2.5/5
Review by Brogen Hayes