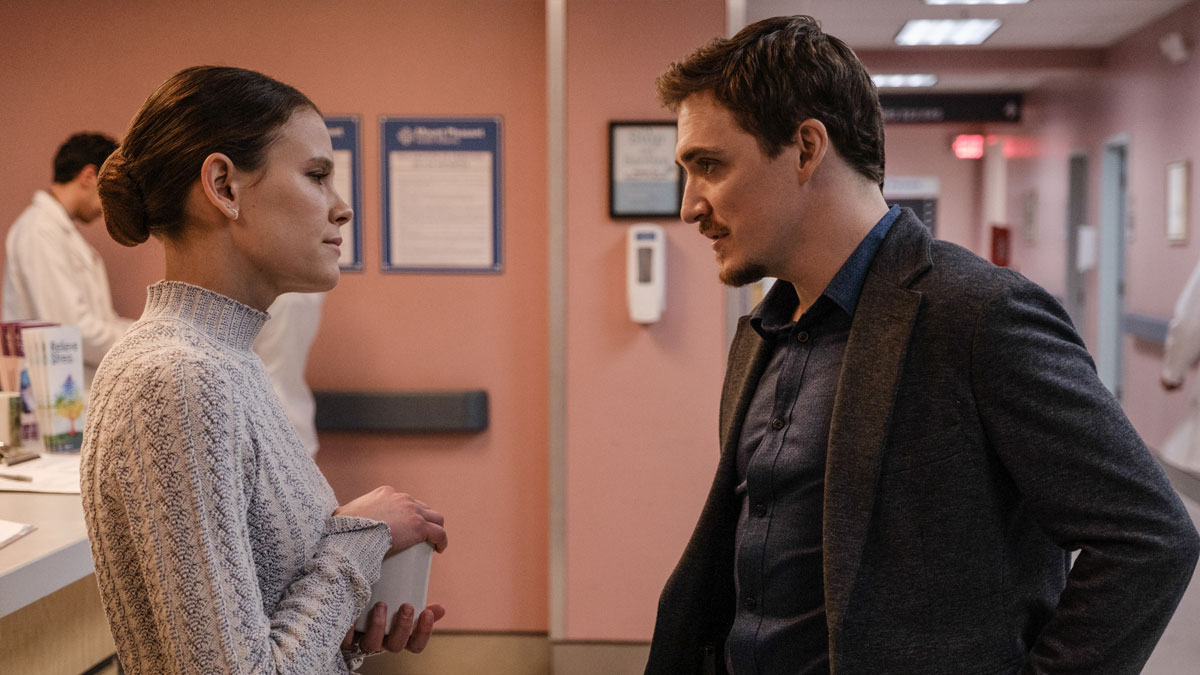 The Plot: Hospital doctor Rose (Sosie Bacon) witnesses a traumatic incident. A patient in her care is distressed, babbling about something terrible she saw. A few minutes later the patient is dead from suicide, with an evil smile carved onto her face. Rose soon notices the same smile re-appearing in other people, tormenting her. Joining forces with her policeman ex Joel (Kyle Gallner), she investigates further and finds some dark truths about her past…

The Verdict: A film can’t always be judged correctly from the trailer. Liam Neeson’s deeply contemplative, icy thriller The Grey is an infamous example. Studio horror Smile likewise has a standard-looking, peek-a-boo trailer that doesn’t particularly distinguish itself from all the other horrors coming out at this time of the year. Trailers like that are like corpses turning up in a Friday The 13th film. Audiences will know what to expect from the tried-and-true horror formula here, but it’s with a sense of mild surprise that Smile manages to be that bit more. While Smile does play to genre conventions and knows how to orchestrate a well-timed jump scare, there are also some deeper themes at work here about familial issues, dealing with trauma, an impending fear of death or worse – complete insanity.

Writer/director Parker Finn’s script bears more than a passing resemblance to the superior chiller It Follows. It’s as if he took a similar concept about a lethal chain curse that is nearly impossible to stop but twisted it into an evil rictus grin and then let it play out to his own motivations. Finn even directly lifts a whole scene from It Follows involving a looming figure – copycat or homage? Perhaps both simultaneously, but admittedly there are very few horrors these days that are not derivative of something else. With that plot awkwardness out of the way, Finn jumps straight into a bloody death and then slows the film down to crank up the tension on our lead character – one deadly smile at a time. It’s a mostly effective delivery system of plot and pacing, digging deeper into the mystery surrounding these violent apparent suicides and Rose’s own troubled past with her mother. Rather than pack everything into the usual 90 minutes for horror, the longer running time is put to good use.

There are the usual horror scares and signposted shocks that don’t come as a surprise, along with a not exactly revelatory ending. For all that predictability though, Finn builds in some genuinely creepy and unsettling moments, along with a tense atmosphere of dread. Thankfully, some of them were held back from the trailer for that money shot moment. Finn doesn’t hold back on the blood and gore either – diet horror for ratings reasons just won’t cut it in an occasionally off-the-rails film like this. The film is at its strongest when Rose questions everything her senses detect, her sanity gradually ebbing away in front of family and friends. This is where Sosie Bacon (daughter of Kevin) comes into play as the wild card. She holds the film together and does a nice line in Veronica Cartwright-style freaking out at just the right (or wrong) moment. Her facial reactions to some very vivid nightmares are instant memes in the making. While there’s not much that’s original about Smile, there’s still a decent amount of the freaky good stuff to make it a light recommendation as we ‘head’ (of the lopped-off variety) into the spooky season.