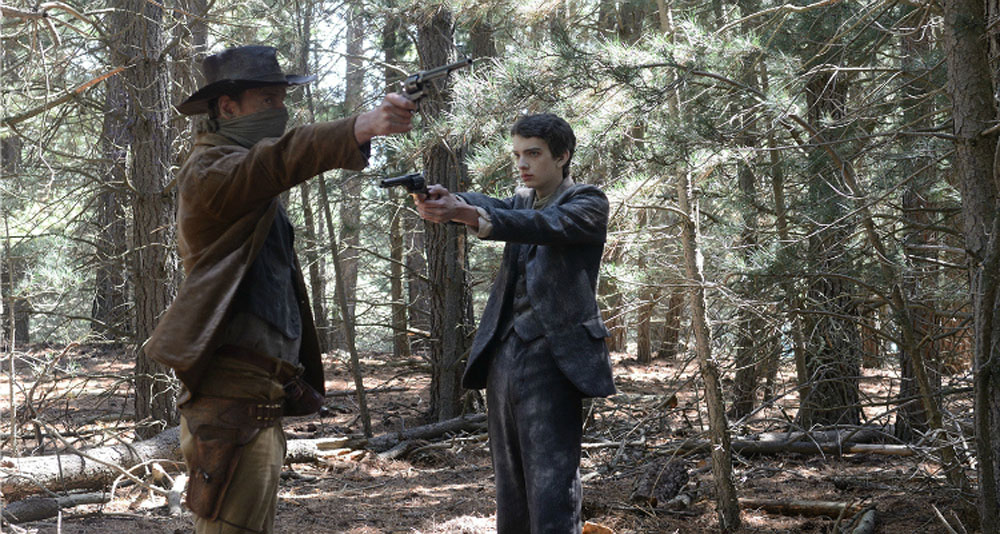 SLOW WEST (UK | New Zealand/15A/84mins)
Directed by John Maclean. Starring Michael Fassbender, Kodi Smit-McPhee, Ben Mendelsohn, Caren Pistorius.
THE PLOT: In the 19th century, a young man named Jay (Kodi Smit-McPhee) sets out from Scotland to travel across America and find the woman he loves. Along the way, he falls in with the mysterious outlaw Silas (Michael Fassbender) who agrees to help in on his journey, for a price.
THE VERDICT: Perhaps not as slow burning as the title might suggest, SLOW WEST is, nonetheless, a beautifully made film about tracking down love through a dangerous and ruthless world.
Kodi Smit-McPhee is strong as the quiet and lovelorn Jay, and his quiet determination, and his sense of justice are the backbone of the film. Michael Fassbender looks a tiny touch too modern for the role of Silas the outlaw, but he is strong, as usual, and brings gravitas to the film. There is a good contrast between the two that makes them watchable; Jay believes that the frontier is a place of hope and new life, whereas Silas has learned that it is a place where it is all too easy to die. Ben Mendelsohn brings the creepy and intimidating as Silas’s former friend Payne, and Caren Pistorius plays the love of Jay’s young life, Rose.
The story, written by John Maclean feels like a combination between a road movie and a morality tale. Almost everything that can go wrong does, and it is not always the moral that win the day. The dialogue is strong, and the connection between the characters works well, with everyone having an agenda, and double crossing one another.
As director, John Maclean – in his directorial debut – allows the tension in the film to ebb and flow. The audience is aware of what is at stake long before Jay is, and although it is clear that Silas is a man of dubious intent, there is a vein of empathy and morality in him that consistently shines through. The pacing of the film is well thought out – especially since the title almost serves as a warning – and the final set piece is a gritty Western joy, full of twists and turns.
In all, SLOW WEST contains strong performances from Fassbender and Smit-McPhee in this quiet but touching Western that is at once a road movie, a morality tale and an examination of hope and despair.
RATING: 4/5
Review by Brogen Hayes