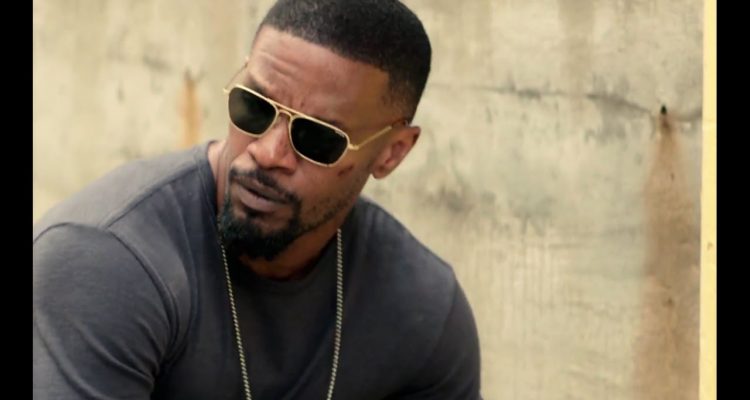 SLEEPLESS (USA/15A/95mins)
Directed by Baran bo Odar. Starring Jamie Foxx, Michelle Monaghan, Dermot Mulroney, Scoot McNairy, Octavius J. Johnson.
THE PLOT: Las Vegas cop Vincent (Jamie Foxx) and his partner Sean (Tip ‘T.I.’ Harris) rip off a drug deal and steal a bag of cocaine worth thousands of dollars. Bad idea. Casino boss Rubino (Dermot Mulroney) was due to deliver the bag to hard-wired drug dealer Novak (Scoot McNairy), who is under pressure to step up to the plate from his old man. Rubino kidnaps Vincent’s son Thomas (Octavius J. Johnson) and uses him as leverage, but the bag is snatched by driven Internal Affairs cop Bryant (Michelle Monaghan). In a town full of dirty cops, someone is going down…
THE VERDICT: ‘Sleepless’ is a remake of 2011 French-Belgian film ‘Nuit Blanche’ / ‘Sleepless Night’. Not that it matters too much, as the original bypassed cinemas here. This American remake does little to distinguish it from the myriad of cop thrillers that regularly pop up in cinemas. Much like the standard issue police gun, this is a standard issue cop thriller.
It starts promisingly though, setting up all the players in turn and their own particular agendas. That is, before they all start to butt heads. Everyone here is under pressure of some sort, whether from higher-ups, associates or their own driven personalities. For a while anyway, Swiss director Baran bo Odar turns up the heat and cranks up the tension to good effect. Around half-way through, the film loses momentum and becomes tiresome. There are only so many times a chase through a casino floor can be exciting, so Odar throws in a car at one point in a bid to salvage that momentum.
The plot ties itself up in tangles as characters switch sides without much motivation. Then there are the usual last-second saves by characters who shouldn’t even be there. They’re all very predictable thriller tropes. Dirty cop films are ten-a-penny, so this film really needed to offer something more. Odar does try to add another angle to Vincent’s story, but it’s a rather late plot development which complicates the plot unnecessarily. Foxx could do these kinds of roles in his sleep, so he’s presumably picking up a paycheque here. Monaghan is good though, even if her character’s troubles are only hinted at. ‘Sleepless’ is passable, but is unlikely to give anyone sleepless nights.
RATING: 2.5/5
Review by Gareth O’Connor