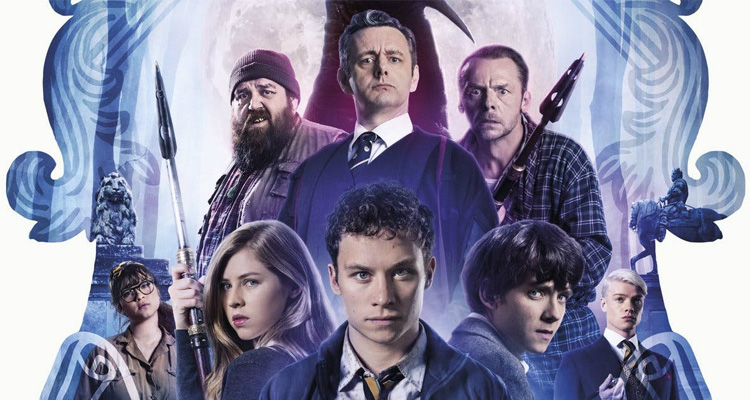 The Plot: Teenager Don (Finn Cole) arrives at the oddly named boarding school Slaughterhouse. It’s a posh place, with its clearly-defined cliques and a proud, doting headmaster in The Bat (Michael Sheen). Don befriends fellow pupil Willoughby (Asa Butterfield) and lusts after head girl Clemsie (Hermione Corfield). However, there are bigger problems to worry about. Fracking by a mining company in the nearby forest causes a sinkhole to appear, much to the concern of teacher Meredith (Simon Pegg) and environmentalist Woody (Nick Frost). Some things crawls out of the sinkhole – hounds of hell, who have a thirst for chaos…

The Verdict: Already much-loved character actors, Shaun Of The Dead stars Simon Pegg and Nick Frost have formed their own production company Stolen Picture. First out of the gate is horror comedy Slaughterhouse Rulez, which plays into the same mix of laughs and scares as their breakthrough film. The setting is Slaughterhouse, a very British boarding school. A Hogwarts for muggles where our audience surrogate, Don, discovers that the grandiose school motto means ‘through bloodshed to immortality’. That’s what he certainly gets, as he finds his new school under attack from dog-like creatures from the bowels of the earth.

The fact that the creatures look along the lines of the dog creatures from Ghostbusters is an indication that the film shouldn’t be taken seriously. The emphasis here is more on comedy, even during some surprising deaths and gory moments. It’s a light-hearted affair from director Crispian Mills, whose only other directorial credit is the forgettable A Fantastic Fear Of Everything, which also featured Pegg. Mills is still finding his feet to some degree, as there are noticeable pacing issues with getting the story moving. It takes a good while before the creatures are introduced, much longer than is necessary. While character development is important, it shouldn’t slow down the film. The editing just needed to be tightened up here.

That said though, when the film gets moving Mills mostly delivers on its potential. The students have to fend for themselves, as the adults prove useless in fighting hell-spawn creatures (not on Slaughterhouse’s school curriculum, eh?). The story of an outsider like Don proving his resourcefulness and fitting in through adversity is a relatable concept. Mills has some fun with his younger cast here, bouncing them off seasoned players like Pegg and Frost… and an uncredited cameo from a well-known actress. The creature design is funky, but given budgetary constraints they’re kept mostly in the dark. That’s not so bad though, as it heightens some well-timed scares.

As horror comedies go, Slaughterhouse Rulez is mildly diverting and occasionally amusing, but never really that scary. It’s slight and sweet, with an upbeat tone. Not exactly a must-see, but it has its moments. Three stars for effort, chaps.