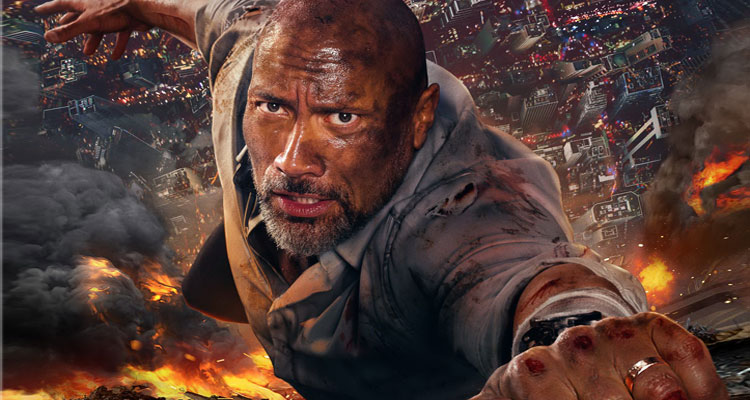 The Plot: Former FBI agent Will (Dwayne Johnson) suffered a work tragedy a decade ago. Now with a prosthetic lower leg, he’s taking it easy with his wife Sarah (Neve Campbell) and their two kids in Hong Kong. Not too easy though. He’s a private security contractor just drafted in to manage security for The Pearl, the world’s tallest skyscraper. It’s a high-tech vertical city managed by Zhao (China Han). However, Will finds himself framed by a group of heavily armed terrorists led by Botha (Roland Moller) who set fire to the upper half of the building. On the run and offsite, he desperately needs to evade the police, get back into the building and save his family…

The Verdict: As the lights dim and you settle back into your comfy cinema seat, set your brain on dumb. Skyscraper is exactly what you would expect from a summer blockbuster – loud, expensive and ridiculously over-the-top. It’s also highly derivative, cobbled together from stolen chunks of better films – most obviously Die Hard, The Towering Inferno (the grand-daddy of disaster films) and, surprisingly, The Lady From Shanghai. It really shouldn’t work at all and could easily be dismissed as fluffy popcorn entertainment for the sunburnt masses. Which it is, but for some reason it all manages to work. Just about.

The secret ingredient here is Johnson. Now one of the world’s biggest and most profitable movie stars, the charismatic man mountain is often the best feature of his films. Thanks to his Herculean effort, he gives a punchy and highly physical and at times vulnerable performance. He manages to hold the whole film together, like Superman holding up a broken railway track as a train hurtles overhead. The script by writer/director Rawson ‘Dodgeball’ Marshall Thurber is so outrageous and makes no attempts to hide its origins that you have to relent, suspend disbelief and go along for the ride.

The script has as many holes as The Pearl has in breaches of security and dodgy personnel. Whatever happened to background checks? Did nobody listen to the Fire Chief and Architect talking about burning skyscrapers back in 1974? And why bring Will’s cutesy kids into the picture, when they only serve to act as an Achilles heel? John McClane left the kids at home, where they belong. However, the script does make something out of Campbell’s otherwise throwaway wife role, giving her something more to do than just scream and look terrified. Kudos to Thurber for that.

What the film lacks in logic, it certainly makes up for in spectacle. Every dollar is onscreen, with The Pearl a lavish dream skyscraper complete with a mystery pearl on top – which comes into good use later on in a visually striking sequence. A further sequence in which Will has to get through some wind turbines is hair-raising, while the shoot-outs and punch-ups are surprisingly hard-edged to get away with a 12A. All in all, it’s more enjoyable than it has a right to be. If you’re going to steal, steal from the best – which is what Thurber has done here. This wobbly Skyscraper manages to not collapse under the weight of its ambitions. After a blockbuster-starved month of football, Skyscraper is a welcome return to what Hollywood does best at this time of the year.