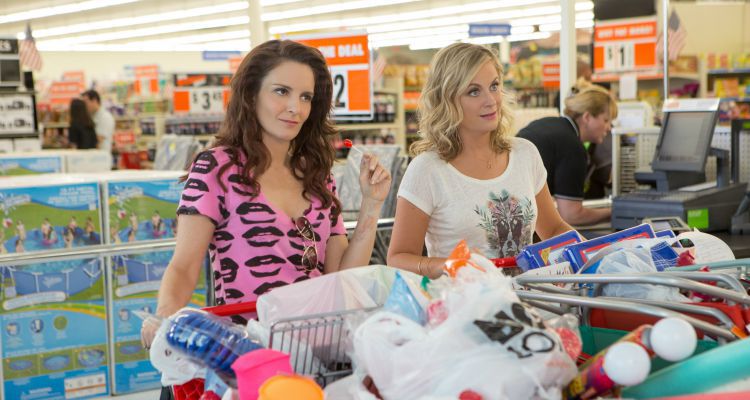 SISTERS (USA/15A/118mins)
Directed by Jason Moore. Starring Amy Poehler, Tina Fey, Maya Rudolph, Rachel Dratch, Dianne Wiest, Ike Barinholtz, John Cena.
THE PLOT: Kate (Tina Fey) and Maura (Amy Poehler) are adult sisters who have been very different for most of their lives; Kate is free wheeling and wild, while Maura is tightly wound and controlling. When the sisters learn that their parents are selling their childhood home, the two team up to have one last blowout in the place that holds so many memories for them.
THE VERDICT: On paper, ‘Sisters’ sounds like a wonderful idea for a film; teaming comedic powerhouses Amy Poehler and Tina Fey – both fresh from their hit TV shows – is surely a recipe for hilarity, but with a two hour running time and some strange storytelling choices, ‘Sisters’ is not the comedy Fey and Poehler fans were hoping for.
Both Fey and Poehler do well enough with what they are given, but the truth is that what they are given just isn’t enough. The screenplay tries to turn expectations on their heads by having Fey play a freewheeling mess whose daughter wants nothing to do with her and have Poehler play the uptight neurotic one, and then try and switch these, but this simply doesn’t work. Both actresses ad lib well, but the screenplay is against them with paint ending up in the pool, unwanted guests and a music box ending up in someone’s rectum. The rest of the cast includes Maya Rudolph, John Leguizamo, Ike Barinholtz, Rachel Dratch, John Cena, Dianne Wiest, Bobby Moynihan on super annoying form.
The screenplay sets up the comedic scenario – adults trying to recapture their youth with one last party – but then seems to wander off and leave the actors to it. It is not that these comedians don’t try, they really do, it’s just that other than the odd line, the film is not really that funny, which is a disappointment since it was written by Saturday Night Live writer Paula Pell. As well as this, so very much happens at a party that takes place in one night that the energy of the film simply fizzles away.
Director Jason Moore tries his best to keep ‘Sisters’ moving, but with so much going on at the party, everything feels too languid, and too chaotic at the same time. With a running time of 118 minutes, there is not enough action or comedy to keep the film going, and it fizzles out about an hour in.
In all, ‘Sisters’ could have been a showcase of Fey and Poehler’s acting skills and comedic timing, but the film is drawn out, thin and chaotic and ultimately disappointing. There are some laughs in there but not enough to justify an almost 2 hour running time.
RATING: 3/5
Review by Brogen Hayes