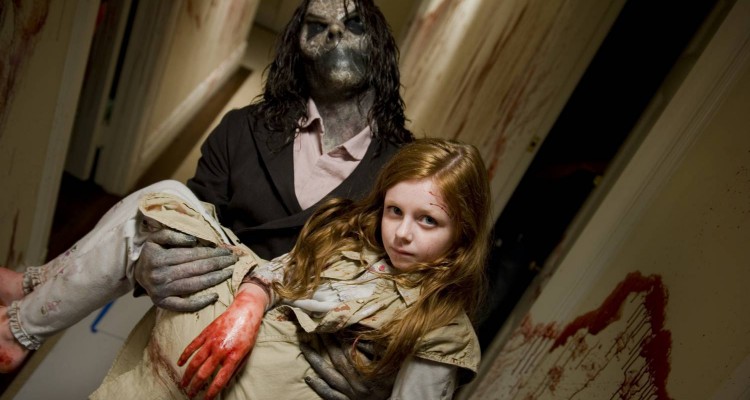 SINISTER 2 (USA/16/96mins)
Directed by Ciarán Foy. Starring James Ransone, Shannyn Sossamon, Robert Daniel Sloan, Dartanian Sloan, Lea Coco, Tate Ellington, John Beasley, Nick King, Lucas Jade Zumann, Jaden Klein, Laila Haley, Caden M. Fritz.
THE PLOT: Having been fired from his job as a police officer (unfairly, of course), the man known as Deputy So & So (Ransone; think Bruce Campbell meets Ty Burell) has turned private investigator, determined to find the links to a series of grisly family murders where, in each case, only a single child survives. His trail leads him to believe that the family homes themselves possess much of the voodoo power, and so when he sets out with petrol cans in hand once more to destroy his latest possessed find, he’s shocked to find lip-biting single mum Courtney Collins (former manic pixie girl Sossamon) and her bickering Spielbergian twin sons are resident there. Courtney is hiding from a violent husband (Coco), who might just be the reason younger son Dylan (Robert Daniel Sloan) has been having nightmares. Then again, the nightmares may also be there because Dylan sees dead kids, who nightly take him down into the basement to watch grisly Super 8, Christopher Doyle-worthy footage of those Seven-esque family slaughters. The deal being, these Children of The Corney promise him, that the nightmares will stop once he has watched them all, and that nasty bogeyman Bughuul (King, looking scarily like THE ROOM’s Tommy Wiseau) will be gone from his bedroom closet for good. It’s enough to make jealous older brother Zachary (Dartanian Sloan) green with envy, and he’s soon battling for the creepy ghost kids’ affections…
THE VERDICT: SINISTER 2, a so-so sequel to an intriguing 2012 horror creation. The creators, Scott Dickerson and C. Robert Cargill, are here again, as co-writers and executive producers, but behind the camera is young Irish filmmaker Ciarán Foy, who made quite an impact with 2012’s CITADEL (a Dickerson Twitter rave actually led to this gig). Foy clearly understands the musical timing of horror, but there’s little here that jumps beyond the predictable he’s-right-behind-you jolts. On the plus side, there’s probably enough here to spark some serious box-office moolah, a sequel, and a Hollywood career for young Ciarán. So, you know, hooray all round.
RATING: 2/5
Review by Paul Byrne