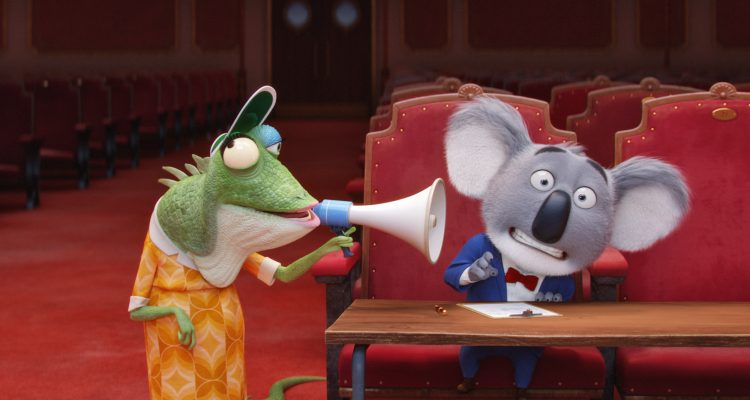 SING (USA | UK | Japan/G/108mins)
Directed by Garth Jennings. Starring Matthew McConaughey, Reese Witherspoon, Seth MacFarlane, Scarlett Johansson, John C. Reilly.
THE PLOT: Koala Buster Moon (Matthew McConaughey) fell in love with theatre when he was a young kid. Now the owner of his own theatre, Buster is in serious financial trouble, but comes up with an idea to fill the house to capacity; a singing competition! After auditions, Rosita (Reese Witherspoon), Mike (Seth MacFarlane), Ash (Scarlett Johansson) and Meena (Tori Kelly) are selected to compete, but it is only a matter of time before Buster’s debts catch up to him.
THE VERDICT:  On paper, ‘Sing’ may sound like a sweet and novel idea for a film, the trouble is that the film ends up turning into a kind of cute animated version of ‘The X Factor’, complete with animals and coloured squid, but a film that is surprisingly lacking in heart and, for a film about singing, soul.
The cast of the film features Matthew McConaughey, Reese Witherspoon, Seth MacFarlane, Scarlett Johansson and John C. Reilly, all of whom have proven their skills at singing, as well as their skills as voice performers. All of this is well and good, but Sing never manages to be as engrossing as it should be, and the audience has a hard time rooting for the characters, even though the roles are well performed.
Garth Jennings’ screenplay has all the ingredients to make a sure fire hit; anthropomorphic animals, hit songs and true underdog tales for the audience to root for – a bankrupt koala, an elephant who can sing but is painfully shy, a pig who never realised her dream of being anything more than a harried mother and a cocky mouse who believes the world owes him – but although each character is given a little back story, it is not enough for the audience to empathise with them, especially since we already know they are all going to get over their fears because… well… that’s what creatures in these kinds of films do.
As directors Jennings and Christophe Lourdelet never manage to round the characters out on screen, even though they are performed by wonderful actors and singers. Songs used in the film often try to take the place of genuine emotion and fail, and making the characters animals only serves for the film to feel like a mash up between ‘The X-Factor’ and ‘Zootropolis’, but not quite as good as either. The animation of the film looks good, but the audience may wish to spend more time exploring the world of the film, rather than sticking around for one-dimensional characters to sing their songs and get their moments of glory. As well as this, at 108 minutes long, the younger audience members may find themselves shifting in their seats, especially since the final act is mainly made up of songs and a rather convenient redemption story.
In all, ‘Sing’ never manages to shake the feeling that it was meant to be a lot better than it is. Mashing up a hit TV show with animated, anthropomorphic animals may sound like a winner, but ‘Sing’ ends up being as familiar as the songs by Beyoncé, Katy Perry, Elton John and Leonard Cohen that make up the soundtrack. Oh, and ‘Sing’ has one of the strangest uses of “Golden Slumbers” by The Beatles ever seen on screen.
RATING: 2/5
Review by Brogen Hayes