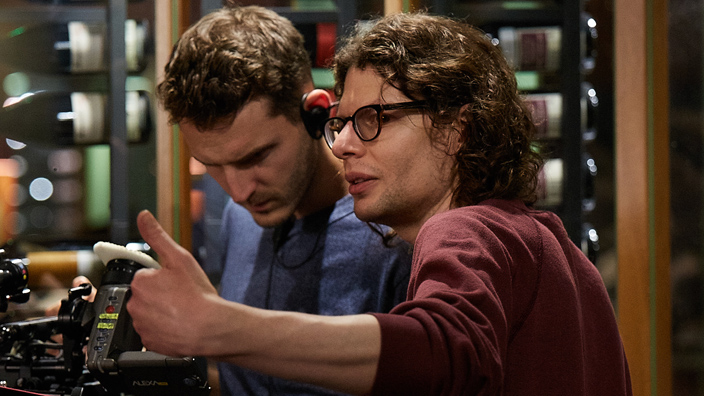 Simon Amstell is a stand-up comedian, known for hosting TV shows ‘Popworld’ & ‘Never Mind the Buzzcocks’ and for his BBC sitcom ‘Grandma’s House’. He’s recently started a career in film-making, directing ‘Carnage’ for BBC and ‘Benjamin’ which hits cinemas on March 15th. ‘Benjamin’ is a semi-biographical comedy about a rising filmmaker (Colin Morgan) , who is thrown into emotional turmoil on the brink of premiering his second film, when he meets a mesmeric French musician called Noah.

You filmed your debut stand-up DVD with an Irish audience at Vicar Street in Dublin, what was it about this venue that stood out for you?

I remember that while I was on tour the people at Vicar St laughed the most, so when it came to shooting the stand-up special I thought it best to return to where the most laughter happened. There’s something about that place that’s quite special, I’m always quite excited to do Dublin as part of the tour.

How did you get started writing ‘Benjamin’ and how was the process of getting your story on to the big screen?

I started writing about my twenties in a fairly general way and it turned into this love story that focused on a person who was so descended, he wasn’t able to love or be loved, he’s eventually broken down by this beautiful French boy who arrives and is somehow patient enough to cope with Benjamin’s bewildering anxiety levels. Finding the funding took a long time, that was a traumatic journey, that thankfully led to somebody handing over a bunch of money so we could make it. I was more surprised by how long it took to write, I thought it would be easier than writing episodic television which I’d done but it turns out that the process of writing a film is so complicated.

That’s a good question, I think you always just know, some stories I can tell on stage alone but once you start writing a film with various characters involved you’d think ‘well that’s quite a Noah line’ or ‘That’s something Benjamin might say in this situation’. I suppose the stand-up I was writing around this time tended to be more present for me, but Benjamin is more like me in my twenties.

There is a Strong biographical element to the film, how much of your own experiences did you write for the movie?

The feelings of Benjamin are auto-biographical, every emotion that character is feeling I have felt; I know what’s going on for him but the events are mostly made up. There are a couple of scenes where things happening on screen actually happened to me but for the most part in order to take the character on a journey from anxious lunatic to someone capable of love in an hour and a half I had to use my imagination a little bit.

Tell us about casting Irish actor Colin Morgan for the lead role; Did you have any discussions about him changing his Irish accent?
I was quite worried because I knew we’d need someone who is naturally very funny and also somebody who you would feel for throughout. I wasn’t interested in making a broad comedy, I didn’t want the emotion to be jeopardised by the comedy. When I met Colin it was a great relief because he was effortlessly funny and really vulnerable, I wanted him to be alright. When I met him we read a few scenes and he read in a London accent, after the first scene I asked for him to do it in his own accent as I couldn’t see why he couldn’t be an Irish person living in London. If anything it helped, it gave an extra bit of isolation to the character.