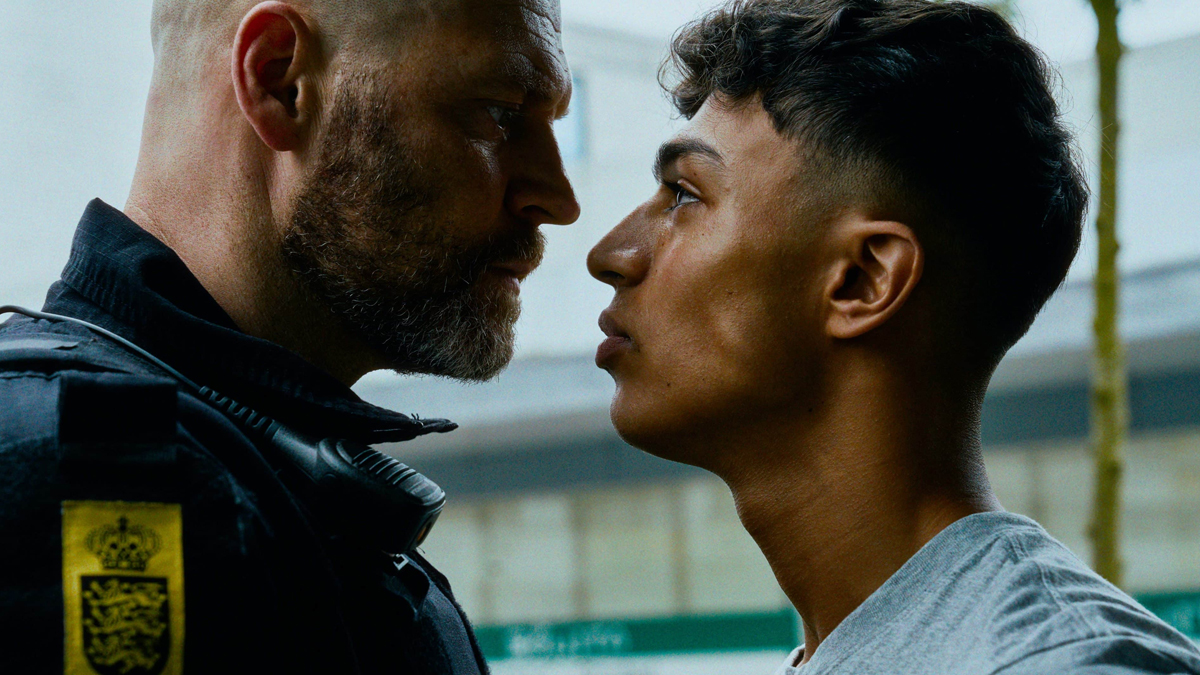 Movie Review
3.5
Not short on thrills

The Plot: Following the arrest of a Muslim teenage boy, the police find themselves under the spotlight once again under allegations of brutality. Unrest spreads around the locality, with the potential to spill over into riots. White Police officers Jens (Simon Sears) and Mike (Jacob Lohmann) are dispatched to keep the peace, whereupon they encounter and then arrest teenager Amos (Tarek Zayat). They soon find themselves surrounded in a hostile tower block environment. With no extraction team willing to go in, they’re on their own. It’s going to be a long night as they attempt to find a way out…

The Verdict: A topical entry into the police procedural, Danish crime thriller Shorta (the Arabic for police) focuses on the uneasy relationship between law enforcement and ethnic communities. This is at a time when allegations of police brutality and excessive force have become headline news, prompting much discussion in the process. Shorta does something different with it though. While outwardly it appears to be a pulpy slice of genre cinema, it’s also a stealth drama in which the main characters learn something new and revelatory about themselves. Like last year’s outstanding French urban cop thriller Les Miserables, Shorta takes no easy routes in its depiction of cops living life on the line, minute-by-minute, day-by-day. While the basic premise of Shorta is akin to an American film, it’s rounded out with a more complex Scandinavian sensibility in its plea for peace and tolerance.

It’s an auspicious debut for co-directors Frederik Louis Hviid and Anders Olholm, who also wrote the screenplay together. It’s a well-written one too, following two tough-nut cops trying to survive the life-threatening events of one day and night. They’re well-drawn characters which ground the film. Jens is the reasonable one, a married man whose moral compass is usually on track – though it swerves wildly over the course of the film as he’s put to the test. Mike is the hothead, a casual racist who doesn’t hold back and is likely to inflame an already difficult situation. In between them is teenager Amos, the local who they come to rely on to keep them alive as civil unrest explodes at short notice. It’s an unusual and morally complex triangle of three very different characters and personalities, but not without a certain sense of humour too. Amidst the external and internal conflicts, there’s a common humanity and survival instinct linking these disparate characters.

The film is strongest when Lohmann and Sears are onscreen together, burning up the screen with their high-energy, physical performances. It helps that when they change into civvies to avoid attention, their weathered looks blend in well with the indifferent urban environment. Hviid and Olholm cast their characters into a cold, maze-like environment of tower blocks. The film takes place mostly outdoors, but yet it still comes across as a confined space with a threat patiently lurking around every corner. There are obvious parallels here to the influential works of John Carpenter (Assault On Precinct 13) and Walter Hill (The Warriors), which the directors duly tip their respective hats towards in a number of sequences. They amp up the tension and then subtly dial it back, though not always successfully. The midsection sags when the characters are split up, leading to the plot slowing down unexpectedly. However, it does pick up for a satisfying conclusion which completes the character arcs in a resonant manner. Not short on thrills, Shorta is a tasty Danish worth digging your teeth into and chewing over afterwards.