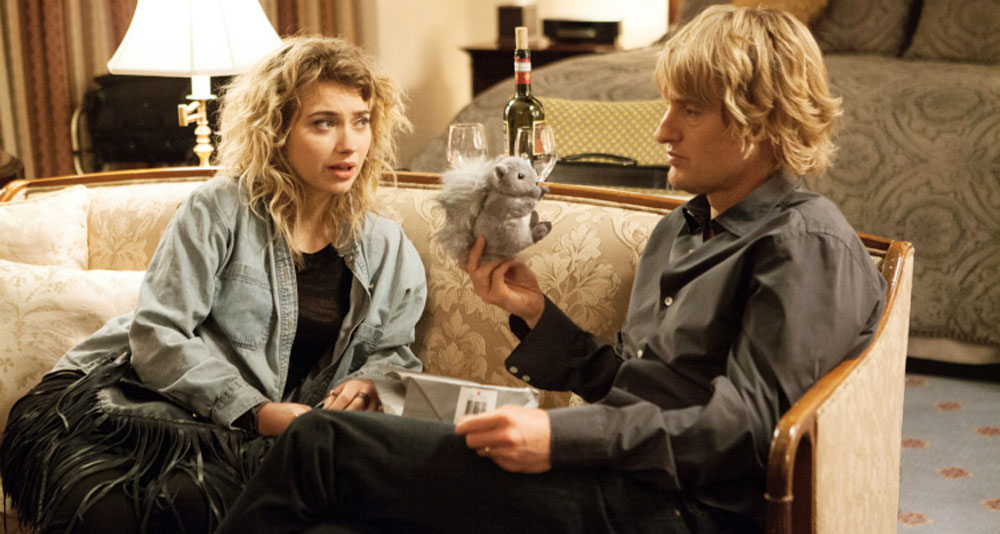 SHE’S FUNNY THAT WAY (USA/IFI/93mins)
Directed by Peter Bogdanovich. Starring Imogen Poots, Owen Wilson, Rhys Ifans, Kathryn Hahn, Jennifer Aniston, Will Forte.
THE PLOT: In an interview with a critic, breakout actress Isabella (Imogen Poots) reflects on her career so far, and tells the story of how she got her big break through a married Broadway director who hired her when she was a call girl.
THE VERDICT: SHE’S FUNNY THAT WAY is the first film from director Peter Bogdanovich in 12 years, but the problem is that it never quite lives up to its promise and becomes tiresome very quickly. Also… Funny what way!?
Imogen Poots does her best as the call girl turned actress who finds herself in the middle of a divorce, messy therapy and being pursued by a private detective. Poots is just about charming enough to carry all of this confusion, but her accent is almost painfully chewy and over the top. Jennifer Aniston does a good job of playing a selfish therapist; Kathryn Hahn is perhaps the most endearing of the cast as Delta, the wife being cheated upon. Owen Wilson plays a familiar role as Arnold, and never seem to do anything he hasn’t tried before, Rhys Ifans obviously has fun playing a lovelorn troublemaker and Will Forte fades into the background as playwright Joshua. The rest of the cast includes Debi Mazar and Jennifer Esposito.
Peter Bogdanovich and Louise Stratten’s screenplay obviously tries to borrow from and pay homage to the screwball comedies of the 1930s and 1940s, but never manages to get the tone right. Instead, confusion and crossed paths reign until everyone has had their say, all paths have been tangled, crossed and recrossed just to make sure that everyone has had their moment of chaos on screen.
As director, Peter Bogdanovich feels as though he is either imitating himself or Woody Allen, as he allows this ensemble cast to take over the entire film. The characters are defined enough on the surface, but are never given a chance to be anything other than superficial and, for the most part, angry.
In all, SHE’S FUNNY THAT WAY tries to be a screwball comedy of coincidence and crossed paths but fundamentally fails in one all important area; the comedy. SHE’S FUNNY THAT WAY is just not funny and, as the manic chaos gets more and more drawn out, becomes tiresome and repetitive.
RATING: 1/5
Review by Brogen Hayes