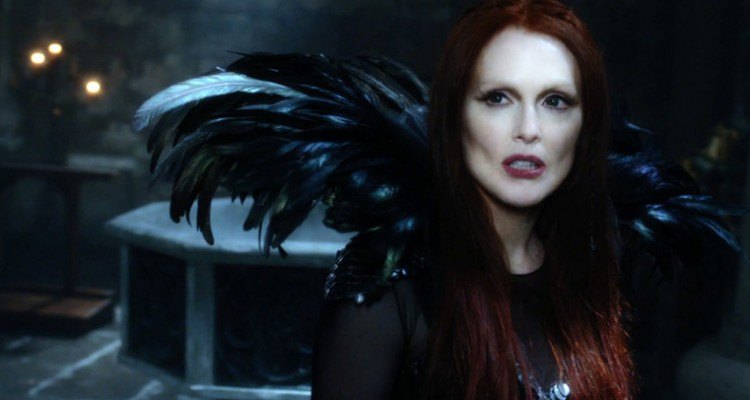 THE VERDICT: The first reuniting of Julianne Moore and Jeff Bridges after THE BIG LEBOWSKI should be cause for celebration, but this CG heavy and story light affair is more of a disappointment than a triumph.

Jeff Bridges, in his third fantasy outing of recent years, chews his way through SEVENTH SON, and not just through the scenery. His performance feels as though bridges was channelling Ian McKellen as Gandalf the Grey, but somehow decided to give his performance while consistently chewing gum. As such, much of his dialogue is unintelligible and, while he is always a strong presence on screen, appears to be held back by the action heavy plot. Julianne Moore also suffers in her first role since STILL ALICE; Mother Malkin is beautiful and evil, but never given the chance to be beautifully evil enough. Instead, she seems much more of a pest than someone who could actually plunge the world into darkness. Perhaps evil lessons from Disney villains would have helped? Ben Barnes does not make much of an impression on screen, and neither does the normally great Alicia Vikander, who flits in and out of the action seemingly at random.

The story is based on the novel The Spook’s Apprentice, by Joseph Delaney, and is written for the screen by Charles Leavitt and Steven Knight. The film jumps from set piece to set piece with little let up for the story to come through. Everything, it seems, is headed toward a confrontation between Bridges and Moore, and the road of the film is paved with bad dialogue, characters falling in love at will and clunky exposition.

Director Sergei Bodrov does little to allow the characters to develop on screen, and seems never sure who the focus of the film is. Sure, the title would imply that it is Ben Barnes’ character, but the film flits between Moore and Bridges’ camps with little concern for the heart of the film, and who the audience should root for. The pacing is lickety split, thankfully, and the film careens between set pieces at a rate of knots. The film is heavy with CGI and rendered dark and gloomy by the 3D, so although Julianne Moore’s hair is beautifully contrasted against her black costumes, there is very little of beauty in this film.

In all, SEVENTH SON is a sloppily scripted film, which seems to try to make up for its missteps with breakneck pacing. Moore is not evil enough, Bridges unintelligible and the rest of the cast seem insipid and paper thin. This may be a camp film, but there is very little fun in it.

Review by Brogen Hayes
2
Not fun