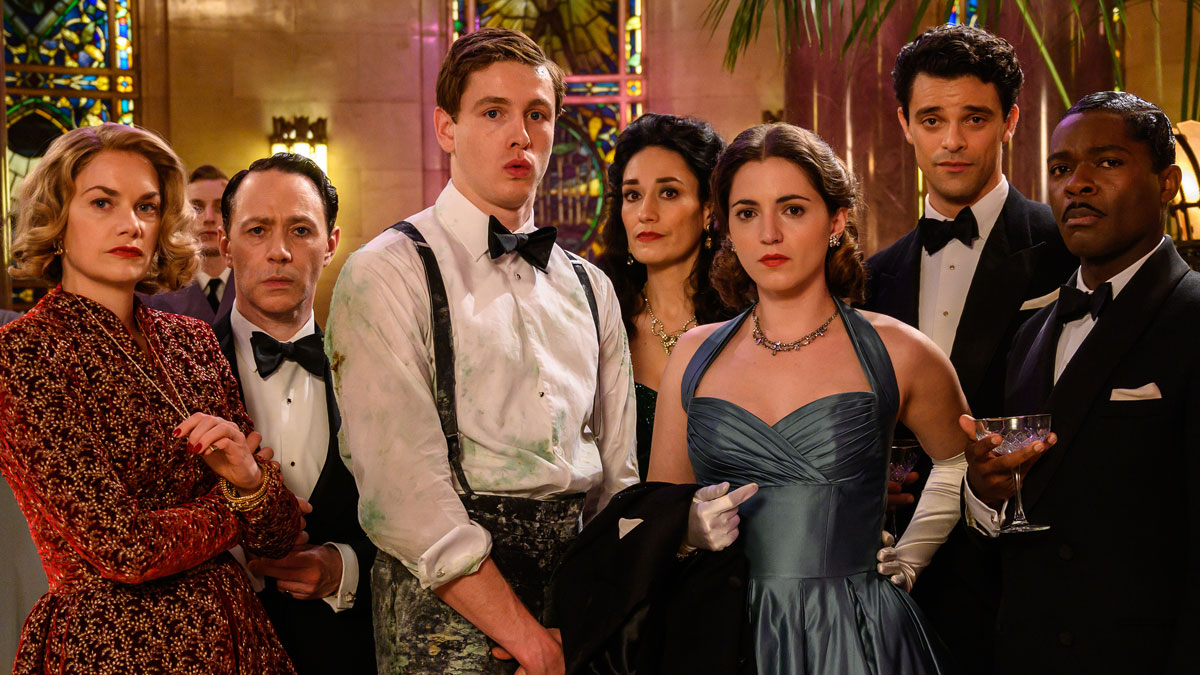 See How They Run – Interview with Charlie Cooper

Saoirse Ronan and Sam Rockwell lead an all-star ensemble cast in See How They Run, a comedy whodunnit set in the glitzy world of the 1950s London theatre industry. Charlie Cooper, the BAFTA award-winning writer and star of This Country, plays Dennis the Usher, a character who observes the action. Does he survive the film? You will have to watch it to find out, but in the meantime, he spoke with us about the film.

As this is a whodunnit, we have to be careful when we are talking about the film, in case we give anything away.
There’s a real science behind it; Mark Chappell did such a good job. You can’t give the game away too soon, everything has to be perfectly plotted, or otherwise, the ending is not satisfying and completely ruins it. He had a real job on his hands. The fact it’s a comedy added a layer; Mark did both so well, which is brilliant.

You worked with the director, Tom George, on ‘This Country’. Is that how you got involved with the film?
Yeah, he just called me up. We’re close outside work, so I knew he was doing this. He mentioned he was going to be doing a sort of period murder mystery comedy, which I thought sounded brilliant. Six months later, he called me and said do you want to be in it? I said yes, and then he mentioned some of the other names they had attached. When he said Saoirse Ronan and Sam Rockwell, I was completely sold, even before reading the scripts.

When you read the script, did you know who the murderer or murderers were? Was that kept a secret?
We all knew, but I knew before I read it. It’s a shame because I’d like to read it with fresh eyes, but even having read it, it was still nice because you can see the buildup and how it gets there.

Anyone who works in theatre knows that the staff know everything that is going on behind the scenes. Dennis, as an usher, secretly has a lot of power.
Yes. Completely. I didn’t think about that, but it’s so true. He is not a million miles from myself, a bumbling theatre usher from the southwest. It was an easy part to do, but you know, the twists and turns you go on with him were so nice to play. It was so different to what I had done before. It was such a great experience.

Dennis has a lot of interactions, more so than many of the other characters. Were you on set for much of the film?
There are a lot of scenes where I don’t have dialogue. I’m sort of either in the background or doing some sort of facial expressions. I had a lot of days, which was great, although not so many words, which suited me fine. It was weird because we shot during the pandemic, which was really surreal. There wasn’t that opportunity to really mingle with the cast or go to the pub after filming. We had an opportunity to get to know each other on set, which was good.

Most of the characters are in cliques, and I did wonder if that was reflected offscreen in the way the cast socialised, but obviously, the pandemic didn’t allow for regular socialising.
Yeah, it did. The only good thing that came from the pandemic was that we could film in amazing historic places like the Old Vic and the Dominion Theatre and the Savoy, because we normally wouldn’t have had the opportunity to do it. The fact that productions were closed at that point meant that we had these places to ourselves, which was really special because otherwise, we’d just be in studios.

Do you feel the difference between using a set and an actual location?
For me, definitely, because you can really get lost in that world of 1950s Western London. Being in those actual places, once you’ve got the costume on, you can slip into that world so easily, which is really great.

Did you feel the weight of the actors who trod the boards over the decades?
Oh, my god, yeah, I could imagine those ghosts looking down and saying, oh my god, is he an actual actor?

As an award-winning writer, do you ever want to change lines?
No, I know how hard it is to actually be able to write a script and finish one. I’m totally in awe of anyone else who can do it because I’ve struggled with doing it. You’re conscious of the process of struggling over various drafts and the input that you get from various people, some good, some not so good. I know the process. But with this script, there was nothing that I could have added to make it better; honestly, it was so fully formed. It is a real world, which is the best you can hope for really.

As we have mentioned, you have worked with Tom George before. Do you have a shorthand?
I think so. We know each other so well, and I think we really come together on the comedy stuff. With humour, we’ve got the same ideas, we even share ideas on how you rehearse it. It was really, really lovely doing something that was completely different, but also taking the same values that we had in This Country, like comedy values and being able to improvise and all the backstories of the characters. We took [those values] and put it in this. The transition was really seamless, it really worked, and it was so satisfying.

When something is an ensemble, there is always a risk that it is too heavy on one character, but the film has a perfect balance. What is the key to getting a successful ensemble performance?
God, that’s a good question. There’s such a mix of people that you see, you’ve got proper film actors, Oscar winners, who have done a lot of straight stuff. Then you’ve got a lot of people who mostly do comedy. I think it is this combination of both, which is so nice. You have Saoirse Ronan, whose comic timing is so good. She’s so, so funny, and I’ve not seen her in anything like this before. It is so satisfying to watch as a viewer. I don’t know what the secret is. I think it’s just getting people who are good at their jobs in a room. We don’t see a lot of Anglo-American films like this, but we have it here, and it worked so well.

As you said, there is such a mix of actors. Was there anyone that you were really looking forward to working with?
All of them, to be honest. I am a big fan of Adrien Brody and being able to do a scene with him, and seeing how he works was a real moment for me. Reece Shearsmith and Tim Key are legends of British comedy. That’s amazing. I think a murder mystery is a perfect vehicle for a great ensemble because you have just got these two characters that are going around interviewing people and up crops a brilliant actor you love from various other shows, which is so satisfying.

What do you want audiences to take away from the film?
I just want them to be surprised by the ending, that would be nice, but I think to get lost in that world will be really good. 1950s London is a great era. It’s so atmospheric; the cinematography is so good. The costumes and sets are brilliant; it is a great world that you can really get lost in for a couple of hours. And for them to walk out of the cinema thinking, I would love to go back to that world for a bit longer. That would be really nice.

SEE HOW THEY RUN opens in Irish cinemas on September 9th