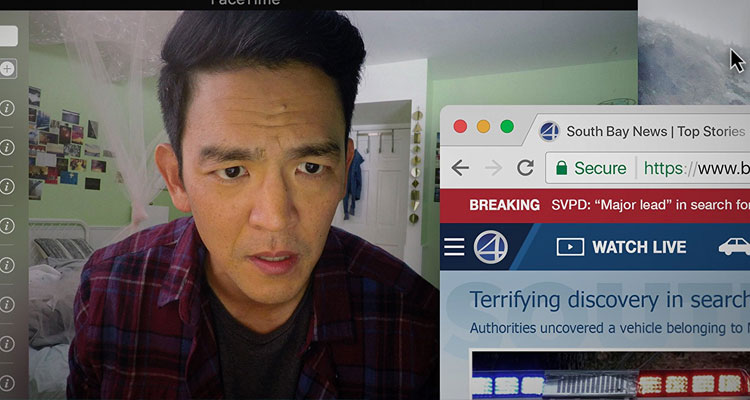 The Plot: 16-year-old San Jose teenager Margot (Michelle La) is very much a daddy’s girl. Her father David (John Cho) keeps in regular touch with her via his mobile phone. They’ve been through a lot together, having lost mother and wife Pamela (Sara Sohn). One night, Margot doesn’t come home or respond to her father’s texts. Frantic, David repeatedly texts her… but no response. Suspecting that something has happened, he hacks into her laptop, e-mail and social media accounts to find out where she is. Police Detective Rosemary (Debra Messing) investigates Margot’s disappearance and discovers that she may have deliberately disappeared…

The Verdict: Unfriended has a lot to answer for. The atrocious desktop-based horror film from 2014 (which inexplicably had a recent sequel) appears to have spawned an imitator in the form of a thriller called Searching. Yes, this new film takes place almost entirely on a laptop desktop, with alternate views via news reports, surveillance cameras, webcasts and video chats. Maybe this reviewer is the wrong generation, but this lazy and clunky narrative device is a poor man’s alternative to telling a story properly via a third person perspective. When the story is this intriguing, it doesn’t need a millstone around its neck to draw attention to itself.

David finds himself facing a parent’s worst nightmare – a missing child. What starts out as a missing child investigation soon takes many twists and turns, as we discover that David doesn’t really know his daughter. Who does, when they appear to be living most of their lives on social media? The film takes the form of an intensive investigation, as David won’t let the police do their job alone. He is both a hindrance and a help, something which Star Trek actor Cho gets across well, digging his teeth into this role. Cho manages a tricky balancing act with his character – is David just obsessively worried or is he really on to something that the police didn’t catch? He keeps him just the right side of credible, even with red herrings and false leads popping up.

Given the recent discussion in the film industry about the need for increasing diversity in storytelling, it’s a welcome move to see a story based around Asian-American characters. That’s not just in the casting, but also in the direction – with Aneesh Chaganty making his directorial debut. He shows a good command of the twisty-turny story he co-wrote with Sev Ohanian, layering on deepening developments in the plot so that it doesn’t go in the most obvious direction. Even with varying image quality and changing screens due to the desktop concept, there’s an ever-increasing sense of suspense as to what will happen next.

Whereas Unfriended failed utterly to make its desktop concept work, Searching manages to keep its digital footprints moving at enough of a consistent pace so that it’s continuously involving. Films ultimately come down to their scripts and this is a strong enough one to hold its own, even when vital moments are missing due to no ‘footage’ available. Still, this would have worked better as a traditionally-shot thriller with an occasional social media interface. Searching gets a thumbs-up emoji for being inventive and suspenseful all the same.