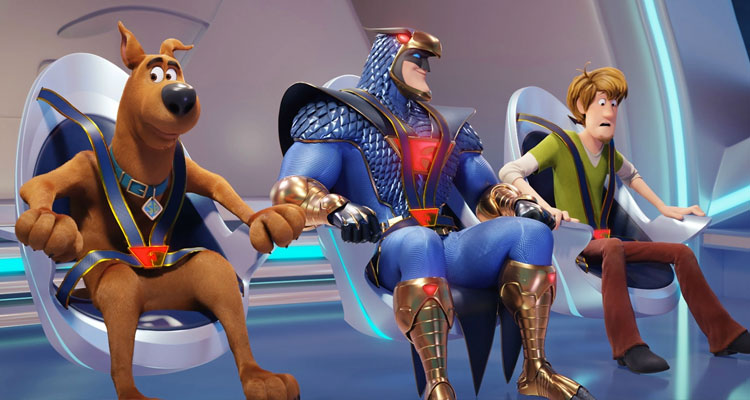 The Plot: Shaggy (Will Forte) didn’t have many friends growing up. That is, until loveable rogue dog Scooby (Frank Welker) came into his life one day. After that, they were the best of pals and soon found their own little gang including Fred (Zac Efron), Velma (Gina Rodriguez) and Daphne (Amanda Seyfried). When you have a mystery to solve, who you gonna call? And they have a mystery right on their hands when Dick Dastardly (Jason Isaacs) is intent on finding his lost mutt in the underworld. There is also the somewhat smaller task of unleashing a ‘dogpocalypse’ headed by ghost dog Cerberus. With the aid of the heroic Blue Falcon (Mark Wahlberg), the team sets out to stop him…

The Verdict: If the phrase Scooby-Doo conjures up nostalgic Saturday mornings watching the Hanna-Barbera animated series in the 1970s and 1980s, then you might wish to look away now. Still here? OK, brace yourself for Scoob – the latest incarnation of the crime-fighting duo Shaggy and Scooby along with their Mystery Inc. buddies, this time rebooted for the millennial generation. With that come all kinds of potential issues. How do the filmmakers ensure a cross-generational film that honours what came before while updating the story and striking out on their own path? It’s a tricky magic act to pull off, the kind of universal animated film whose formula Pixar have sealed in a bottle and few others have been able to replicate.

Such is the case for Warner Animation Group, which has had some considerable success already with the riotous Lego films. Taking a much-loved property like Scooby-Doo and jazzing it up hasn’t worked out though. It also risks alienating the parents of the children who will be plonked in front of the TV to stream it (it was originally intended for theatrical release, but a dastardly virus scuppered that idea). The film begins with a rather touching opening on Venice Beach, as the film gently lulls you into thinking this is going to be a junior origin story. This is the first encounter of Shaggy and Scooby and had the film stayed there, it might have been more bearable. An entire series worth of backstory is crammed into the next 15 minutes, as the rest of the crime-busting Mystery Inc. gang are assembled.

Half an hour into the film and it already feels like it’s about to end (if only it had been a TV series). There’s one anti-climax after another as the plot rushes at breakneck speed with nary a moment for the audience to breathe. At least you can pause it at home and take a break. This is short-attention-span filmmaking, evident from director Tony Cervone’s background in short animated TV series. Branching out into his first feature-length film, he neglects the fact that feature filmmaking requires more subtlety and attention to character detail. The heart of the film is the best buds for life aspect of Shaggy and Scooby and there is a certain charm to it. However, a lot of this is lost when the film becomes overstuffed with other characters such as the unnecessary Blue Falcon (voiced by Mark Wahlberg but sounding like he’s doing a Ryan Reynolds impression). There’s also a gratuitous cameo from a certain celebrity which is odd to say the least.

On the plus side, the film is technically proficient and the CGI animation does have a certain bouncy and colourful quality to it. The star-laden voice work is good too, with Jason Isaacs providing some cartoonish relish with his dastardly villain. Scoob is instantly forgettable though, the kind of soulless and mostly charmless entertainment that so desperately needed a stronger pair of hands to make it enjoyable. Scooby Dooby Doo? More like Scooby Dooby Don’t.