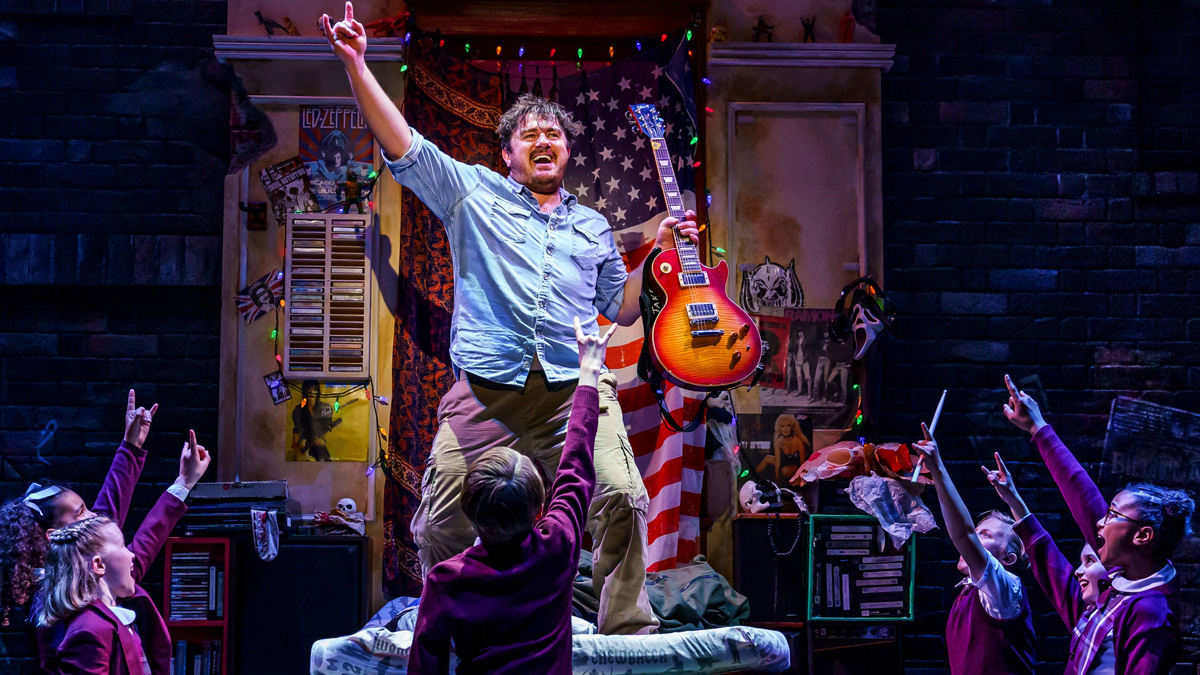 This month Andrew Lloyd Webber’s Olivier Award-winning West End & Broadway show School of Rock – The Musical will have it’s Irish Premiere at Dublin’s Bord Gáis Energy Theatre. Based on the hilarious hit movie, this new musical follows Dewey Finn, a failed, wannabe rock star who decides to earn a few extra bucks by posing as a substitute teacher at a prestigious prep school. There he turns a class of straight-A students into a guitar-shredding, bass-slapping, mind-blowing rock band – sensationally performed live by the production’s young actors every night with roof-raising energy! While teaching these pint-sized prodigies what it means to truly rock, Dewey falls for the school’s beautiful, but uptight headmistress, helping her rediscover the wild child within. The show will from the 21st June – 2nd July. Tickets from €21.00 are on sale now.

Jake Sharp will lead the adult cast as Dewey Finn in spectacular style having previously performed the role in the West End. We spoke with Jake about stepping into such a legendary role, originally made famous by actor Jack Black.

How did you feel when you got the lead role in such a big show?
It was incredible. I previously played Dewey in the West End as a cover. It was my big first professional job, and I was so excited, but the thing I was the most excited about was that my brother was already in the cast. I got to call him and say, Cameron, save me a space in the dressing room; I’m going to be there. My brother is my best pal, and we got to work together in the West End, which was amazing. Getting the part was really exciting and quite daunting because the show is predominantly Dewey. He carries the whole thing. The kids and Miss Mullins play their parts, too, and they’re all incredible, but it’s on Dewey’s back to keep the show going. The pressure of that when I was a cover was daunting. I worked my way up, and when I got the call that the tour was happening and that I was going to be the main man, I felt pure excitement and a slight bit of fear for my knees because it is a very physical role.

How do you sustain the energy level needed for such a demanding role?
Sometimes I don’t know. I eat a lot of pasta and get lots of sleep, but it is exhausting. It’s all made even harder by the costumes, he wears lamb’s wool jumpers and corduroy jackets and trousers, and on stage with all the lights on you which is an added pressure. It is a marathon. There is a lot of movement, but the choreography and it’s not really like dancing; there’s lots of jumping up and down and knee slides and then jumping over desks. There’s lots of physical comedy, and it does take a toll. Sometimes I wake up in the morning and feel my body saying you need to stop doing this today; you can’t do it today, but once you get to the venue and as soon as you’re on stage and the adrenaline hits, you somehow manage to pull it out of the bag.

For many people, their only experience of this character is Jack Black’s portrayal in the film. How did you find the balance between playing the character but making him different to Black’s performance?
I’m a big Jack Black fan, and I love the film and Tenacious D. When I got the job, I purposely didn’t watch the film because I didn’t want it to influence me. People instantly look to see if you’re like Jack Black, so I thought that the best way to go would be to ignore the film but with the knowledge that you can’t help but have some Jack Black in there. I’ve done my version of Dewey, but I’m still saying very iconic lines and singing iconic songs. I’m proud of the balance, and most people begin the show going, okay, who is the Jack Black guy? And then, within a couple of minutes, it doesn’t matter to them. They seem happy with me, so hopefully, it’s enough.

When you went into rehearsals, could you recognize anything in Dewey? Do you have any common ground?
We look alike; we have a similar physique and build. I think I’ve got my life a bit more together than him. I have joked about it, but it seems I’m a method actor without even realising it. I was in bands for years and years, we were doing pubs and clubs, and I aspired to be a rock star. I even trained to be a teacher before being an actor. So, we have a lot of similarities. What I love about him is that he is so passionate. I never fully registered when I watched the film when I was younger; his passion for live music and the band is so great. It should be celebrated more when people have a passion. If you love one thing, you should be allowed to love it forever and not hide what you love.

What was it like working with Andrew Lloyd Webber?
A really surreal experience because I never expected to work for Andrew Lloyd Webber. I didn’t think I would ever be in a professional musical, let alone an Andrew Lloyd Webber. In the beginning, I thought I was going to be found out like, surely, I can’t be here with him? He wrote the show, and he’s written all these unbelievable things. The first time he saw the show, everyone was so nervous, but I wasn’t. I don’t know why. I felt very on top of it. We got through the whole first half, got the interval, and I thought this is going great. In the second half, Miss Mullins has this amazing big Andrew Lloyd Webber song, a classic big Webber number. She was about to sing it, and I suddenly got a bit nervous for her. I thought, gosh, imagine singing something that big in front of Andrew Lloyd Webber, and then suddenly realised I’ve been doing that for about an hour and a half, and the nerves just hit me. My heart rate went up; I got cold sweats. I got through it somehow, but I’m glad it didn’t happen before the show. He was very kind to all of us in the cast. He’s a big believer in music as part of education and everyone having access to music, so the show is perfect. It’s inspired so many 1000s of kids. 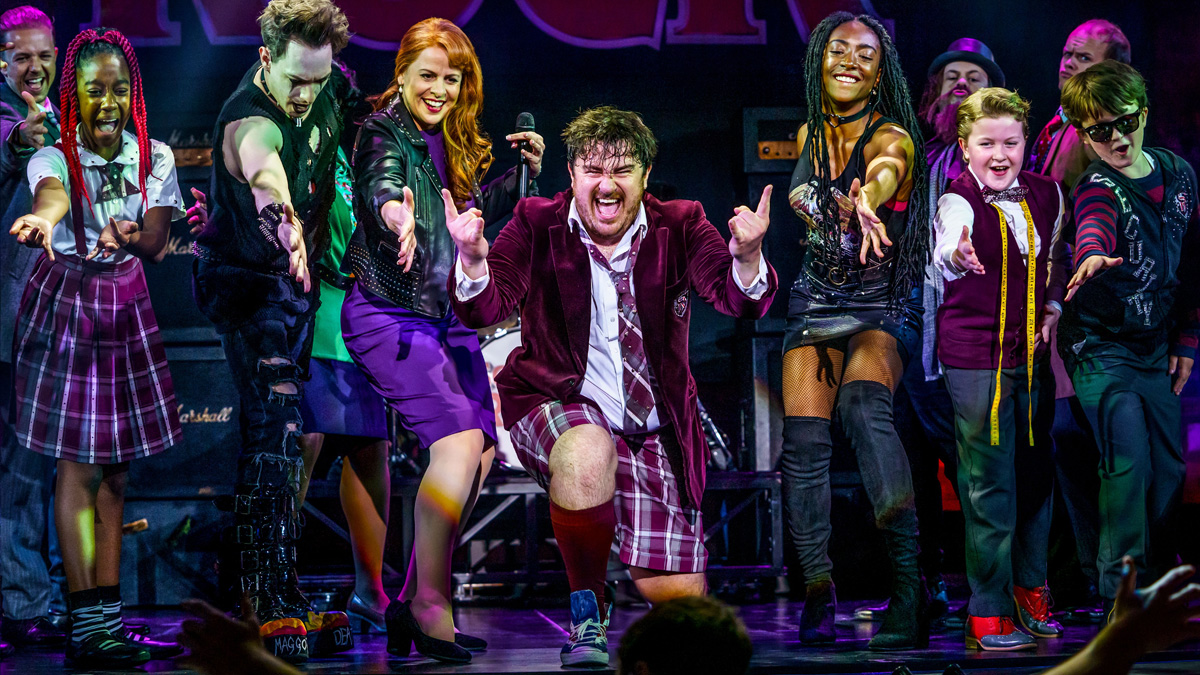 The show has a large cast of child actors. What was it like working with them, and did working as a teacher prepare you for it?
I think it’s helped me that I have experience. I think it’s a bit of a shock for some people when most of your scenes are with 12 kids. They are so talented; it’s next level talented. They’re also all at that age where they have no fear; they are super positive, don’t think about failure, and don’t worry. It makes the whole thing exciting; every show is different; you’re always on, your super switched on just in case something goes wrong, or one drops a line. Even though they are unbelievably talented, they’re just kids, and they get tired or might have had a bad day. Somehow, they still always manage to bring their best side to the show. Their energy is infectious, and you have to match it in everything you do. When you have those days when you are exhausted, knowing you have to match their energy makes it easier for me to do it.

Now that theatres are open, do you find that audiences respond differently to how they did before the pandemic?
As the audience came back, I noticed that for the first 10 to 20 minutes of the show, people observed it like they observed their TV during the lockdown. Gradually, they start to remember that it’s a collaborative experience and that they can laugh aloud, cheer, and clap. You can feel people coming alive again and realising that this is a shared experience. They become vocal and start to rock out in their seats when that happens.

Who was the first to go into theatre, you, or your brother?
He’s four years younger, but he did drama the whole way through school. He is so talented, his singing voice is incredible, and he has such a great CV of work behind him. I watched him perform and be in awe; then, I’d go and play in a grungy punk band. I was always going to his after-show parties and being around theatre people, and then in my mid20s, I decided to give it a try. I loved it, and I had a natural thing for it, so I trained professionally. The first time I ever went on as Dewey. Cameron was in the cast. The show starts with my character and his character walking out at the same time, and our parents got to watch it. The dressers moved his costumes to the wings so that he could get changed there and watch me. It was proper, proper special to take the big bow at the end and have your younger brother just a couple of metres away from you. I wish we could live it again because it was beautiful to work with him.

What do you want Irish audiences to take from the show when they see it?
The thing I love about the show is that it champions everyone. There’s a character that can’t speak but can sing beautifully. There is an outsider who feels super cool when he’s at the keyboard. When you’re in the audience, I think everyone picks one of those kids or adults and wishes they were that person or aspires to be that person. Like I said earlier, having a passion or a focus in life doesn’t have to be something academic or rewarding financially. You can still have a hobby, a dream, or a side project that you can focus all your energy and love on, which should be celebrated. That’s what I want people to take away, follow your passion.

SCHOOL OF ROCK will run from the 21st June to 2nd July. Tickets from €21.00 are on sale now.
For more info visit https://www.bordgaisenergytheatre.ie/