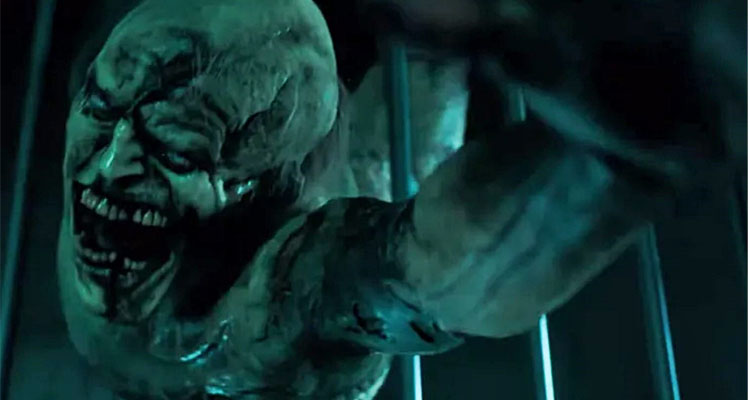 Scary Stories To Tell In The Dark

The Plot: Rural Pennsylvania, 1968. While the landmark Night Of The Living Dead stalks the screens of the local drive-in, a group of teenagers find themselves living inside their own horror story. Stella (Zoe Margaret Colletti), Auggie (Gabriel Rush) and Chuck (Austin Zajur) flee from trouble and end up hiding out in the car of drifter Ramon (Michael Garza). As it’s Hallowe’en, they take Ramon to a reputed haunted house, where the spectre of a woman who committed a terrible act of revenge on her family is reputed to still live there. They pick up a book that was written by her, entitled Scary Stories. Shortly after, the book starts to write its own new stories – in blood. The stories, which involve all manner of ghastly beings, are coming into the real world before their very eyes…

The Verdict: Scary Stories To Tell In The Dark is opening here with a double disadvantage. It’s based on a series of spooky books aimed at children by Alvin Schwartz which, like the similarly-themed Goosebumps, are not well-known on this side of the pond and therefore don’t have a built-in audience. It’s also opening in the wake of two Goosebumps films, which have played around with the whole stories coming alive aspect to ghoulish but family-friendly effect. Schwartz’s books were designed to introduce children to urban legends and folk tales – once you repeat a story often enough, it starts to become an accepted reality. However, neither of these disadvantages are enough to hobble what is an entertaining and often spine-tingling ghost train ride through the realms of the supernatural.

The spooky stories are neatly woven into the story of a group of intelligent and resourceful teenagers (rather than the stereotypical, lining-up-to-be-a-victim types). The script, which was co-written by Guillermo del Toro with a number of other writers, doesn’t dwell too long on each story. Most of them are short films within the film, playing out like a reverse A Nightmare On Elm Street – a waking nightmare rather than a sleeping one. That’s the trick. The treat is that the creature design is highly imaginative and relies on good, old-fashioned practical effects which are more tangible. One particular creature, which assembles itself out of its disembodied parts (and looks like a nod to the visceral work of Rob Bottin), is a great addition to the rogues gallery on display here.

You can sense Del Toro’s contributions in the more macabre, otherworldly aspects of the script which build to a logical conclusion that shows an understanding of the dead, rather than a deep-rooted fear of them. As we know, Del Toro has an affection for his creatures and there’s a distinct personality to each of them. Andre Ovredal is an inspired choice of director here. He already proved himself capable with his mockumentary Trollhunter and then really rattled nerves with The Autopsy Of Jane Doe. He knows exactly where and when to apply the brakes on his ghost train, throwing in welcome dollops of humour… as well as when to accelerate and deliver unsettling scares that aren’t manipulative button-pushing exercises in screen terror. It’s a smartly constructed film by Ovredal that shows a flair for the imaginative.

Scary Stories To Tell In The Dark is best viewed as a ghost train ride or a rollercoaster ride with a mischievous operator in the control room. It doesn’t quite go far enough to be classed as an out-and-out horror (hence the diet horror 15A cert), but it achieves a respectable level of spookiness around its stories, characters and environments that makes it a worthwhile watch. It also sets itself apart from Goosebumps with its attention to the creature design and skin-crawling pay-offs that are aimed at older children. Strap yourself in and enjoy this early Hallowe’en treat.