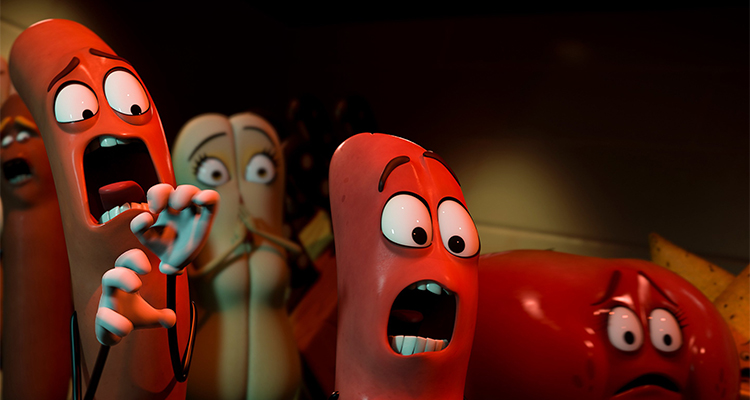 SAUSAGE PARTY (USA/18/89mins)
Directed by Greg Tiernan, Conrad Vernon. Starring the voices of Seth Rogen, Kristen Wiig, Jonah Hill, Michael Cera, James Franco, Bill Hader, Nick Kroll, Danny McBride.
THE PLOT: It’s another fine morning at Shopwell’s supermarket, and all the shelves are heaving with joy and expectation as they sing their daily happy song about getting to the promised land. Which is, basically, out that door, to happiness, home and heaven. For hot dog Frank (Rogen) it means finally being able to consummate his love for his beloved bap, Brenda (Wiig), the two having stayed firm and untainted in their shared packagings, hoping and praying that they will one day be finally free to frolic in some satisfied customer’s kitchen.
Only, life on the other side of those sliding doors isn’t all sweetness and virgin oil, as one terrified jar of honey mustard (McBride) is keen to reveal when he’s returned for regular mustard. That all the food stuffs are being fed a load of baloney to keep them from the darkness that awaits soon becomes apparent to Frank – now, how to start a food revolution…?
THE VERDICT: What is it about extreme bad taste when placed in a traditionally good taste medium, especially cartoons? The great ‘South Park’ tapped into this particular depraved stream beautifully, but whenever outrageous comedy hits the mainstream – from Derek & Clive to Bronx Bunny & Teddy T, Jerry Sadowitz and Frankie Boyle – there is something so deliciously wrong about jerkers in the pack that it makes for mildly guilty but incredibly satisfying laughs.
With Sausage Factory, Seth Rogen, fittingly enough, pulls together all his weiner friends for a foul-mouthed fable that somehow crosses ‘Toy Story 3’’s nightmare kindergarten with Kubrickian kick of ‘The Matrix’. Even though it’s about a bunch of supermarket shelf dwellers dreaming of the after-sale. From an original story by Rogen and his regular writing partner Evan Goldberg, plus buddy Jonah Hill (and adapted for the screen along with two more writers), ‘Sausage Party’ plays like a movie concocted, and riffed into shape, at about four in the morning. At half-past bong o’clock, to be precise.
Like Peter Cook and Dudley Moore just taking a sick idea and twisting it until it goes very blue, ‘Sausage Party’ never lets up, either on its shameless puns nor its clever use of world cuisine as geopolitical stereotypes – just so Rogen and co can put the F into those tense UN border negotiations. And alongside all the slapstick and satire, there’s a hero’s arc in there too, along with a touching lust story.
RATING: 4/5
Review by Paul Byrne