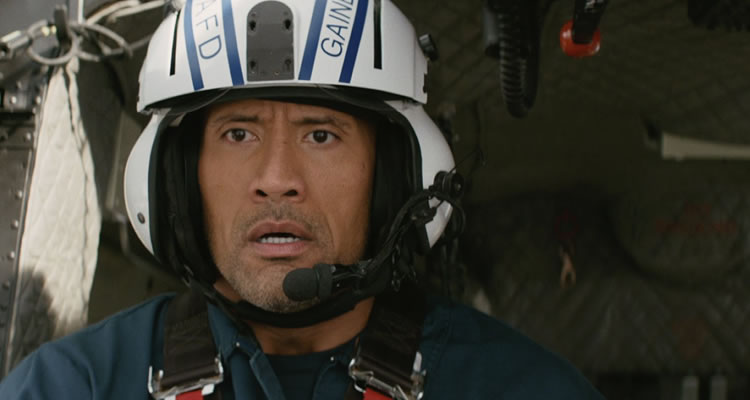 SAN ANDREAS (USA/12A/114mins)
Directed by Brad Peyton. Starring Dwayne Johnson, Carla Gugino, Alexandra Daddario, Ioan Gruffudd, Archie Panjabi, Paul Giamatti, Kylie Minogue, Todd Williams, Hugo Johnstone-Burt.
THE PLOT: California finally looks set to fall into the sea after a massive earthquake brings America’s west coast to its knees, with the lucky ones getting to meet ace helicopter pilot Ray (Johnson), whose time flying missions in Afghanistan has come in pretty handy now for search and rescue around Los Angeles. Those benefitting from the big man’s expertise and dynamic personality include his soon-to-be ex-wife, Emma (Gugino) – who’s about to shack up with skyscraper developer Daniel (Gruffudd) – and their teenage daughter, Blake (Daddario), who is getting all tongue-tied and flirty with a Hugh Grant Lite called Ben (Johnstone-Burt). Oh, and the latter has a pain-in-the-ass, wisecracking younger brother, Ollie (Parkinson). Always good to have a main character who the audience actually wants to see perish. Horribly.
Having tried desparately to warn everyone that a hard rain was about to come is knotty professor Lawrence (Giamatti)…
THE VERDICT: If Arnold Schwarzenegger’s career were alive today, it might be making movies like this. Big, bold, traditional, predictable, and just a tiny bit meh.
Still, you’ve got to admire a movie that depicts the massive destruction of California, and yet tries to make the rest of the world actually feel upset. And you can’t help feeling that the three writers here must be Bill Hicks fan – California gets its ass kicked here big time.
Despite all the crash, bang, wallop of SAN ANDREAS though, it very rarely truly thrills. And that’s certainly not the fault of Johnson – this man knows how to do sincere, and he knows how to do tongue-in-cheek. Often at the same time.
I guess if anyone deserves a slap about the head and face, it’s director Brad Peyton, the man who previously gave us CATS & DOGS: THE REVENGE OF KITTY GALORE and JOURNEY 2: THE MYSTERIOUS ISLAND. So, make that three slaps around the head and face.
RATING: 3/5
Review by Paul Byrne