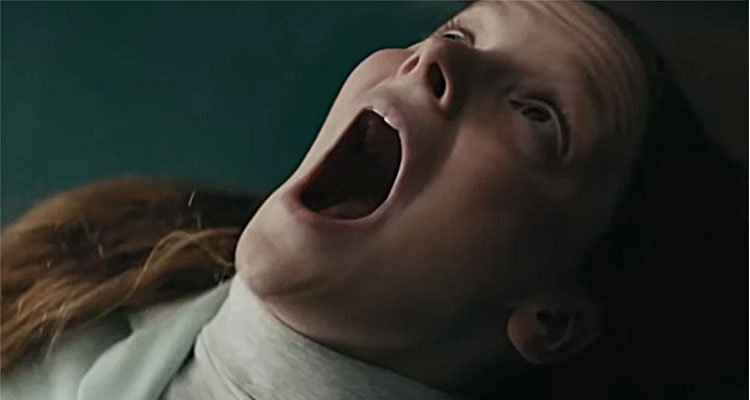 Prim and proper Maud (Morfydd Clark) is a nurse who has been assigned to look after Amanda (Jennifer Ehle). Amanda is a middle-aged former dancer of some note, but is now mostly confined to her home suffering from cancer. She is a woman who has lived life to the fullest, but it is now slipping away from her one day at a time. As Amanda seeks out fun and companionship, devout Maud becomes dangerously obsessed with saving Amanda’s soul – from herself and something potentially malevolent…

The Verdict: Religious-themed horror Saint Maud arrives with a flurry of encouraging words from those who have seen it – or should that be experienced it? This startling feature debut from Rose Glass certainly lives up to the hype and deserves the accolades. It draws the audience deeper into its storyline while assaulting them with arresting imagery and clever sound design that will stay with you long after the credits roll. It’s that kind of carefully-constructed and singular film, the one where you’re locked into it with no escape like Under The Skin. It’s not the Marmite Movie that one was though, being a more human story of religious devotion and otherworldly concerns.

Glass’ script is both simple and complicated in its structure, initially positioning itself as a battle of wills between the contrasting characters of Maud and Amanda. There’s a fascinating interplay between these characters, as they come to recognise each other’s faults and similarities. Amanda is world-weary but is struggling to hold on to life and enjoy it before it’s all over. Maud, on the other hand, was once a carefree and hedonistic young woman. Now she’s found her calling with God and attempts to ease Amanda’s passing from the world. That is, if non-believer Amanda can accept it. Absolution may not be enough for the bitter and snarky Amanda though. As the story progresses, it becomes more morally complex and provocative to the point where divine intervention may be occurring.

For the most of its brief but intense running time, it’s a slow-burn suspense film that keeps you guessing as to character motivations. Is Maud caught in her own religious fervour, seeing what she wants to see as her mind becomes increasingly fractured? Or is there something more sinister at work in the stand-off between faith and the supernatural? It’s in the thrilling third act that the film earns its horror credentials, including a well-placed jump scare. A stand-out sequence involves the kind of character levitation that would make William Friedkin proud, given that it was achieved through old-school mechanical effects. Even the closing shot is both ethereal and shocking, leaving the viewer slightly shaken as a result. While it’s not an uncomfortable film per se, Glass wants you to occasionally squirm and shift in your seat. She’s been paying attention to what makes horror films a safe release from the horrors of the real world.

In order for the script and direction to work effectively, the actors have to be in tune with Glass’ vision. She’s made a real find in Morfydd Clark, an actor who has had small but memorable bit parts (e.g. dual roles in The Personal History Of David Copperfield). Saint Maud should firmly push her into the limelight – she’s been cast as Galadriel in Amazon’s upcoming The Lord Of The Ring’s TV series. Her highly physical, minutely-controlled performance is compassionate. Yet she looks as severe as Nurse Ratched, to the point where Maud’s own transgressions come as a surprise. It’s the kind of break-out performance that heralds a major talent. Ehle is equally impressive, conveying the anger and frustration of a woman losing the battle with her impending death. Saint Maud isn’t the kind of film that one warms to easily, but this divine debut impresses greatly through its considered direction, outstanding performances and eye-popping imagery that will leave an imprint. Great things await for Glass.