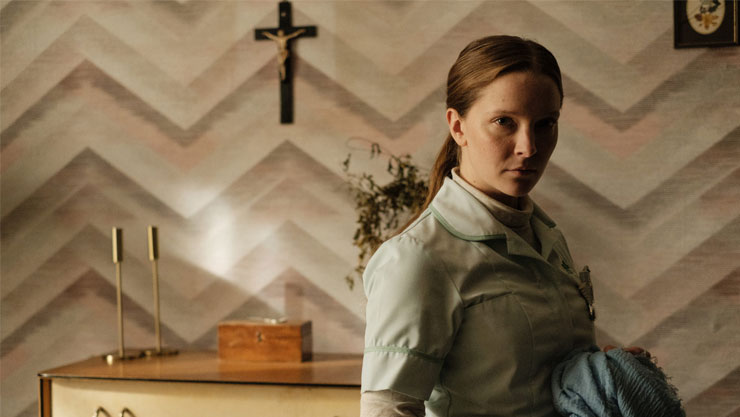 The debut feature from Rose Glass follows a devout live-in nurse, Maud, who becomes enraptured with her new patient, the glamorous ex-dancer Amanda. Maud’s fixation soon mutates into an obsessive mission to save Amanda’s soul.

We caught up with director Rose Glass to talk about the release of the terrifying new movie which is now showing in Irish cinemas nationwide!

Rose, you’ve been doing the film festival circuit for the last couple months what has that been like as a first-time feature film director?

It’s brilliant. When you make a film you’re in such a weird little intense bubble and everyone in your life doesn’t know what you’re doing. So emerging from that was exciting. We premiered at Midnight Madness in Toronto and that was the first time I saw it with an audience and it was a relief. People were reacting at the right time, for example with the nurse, “bit of a c**t”, they laughed and I was like we are going to be fine. So that’s been the most amazing thing, sitting in with audiences.

I actually said it to someone else that there is something about making a film, in particular, a horror that is pervy because you are spending a long time really meticulously constructing this experience for a group of strangers to sit in a dark room and experience together and you’re hoping they’ll get some kind of visceral reaction out of it.

Speaking of visceral reactions. The scene with the converse and the nails comes to mind. What was it like building those scenes and giving them to Morfydd (Clarke) to act out?

It’s a pretty bonkers film and by the time we got to shooting that scene, it was like any other day. It’s interesting because you don’t know when you’re shooting or writing scenes what will stick in peoples minds. I put the pins in an early draft and then took it out because I felt it was too much. Then fairly late in the day, I showed the old draft to one of the producers and they said put this back in. The pins idea was one I discovered when I was researching and came across a short film on self-bondage. In the end, we edited the scene in a way where we didn’t need to do it but we had a special effect version with rubber pins so at one point she would do it all in one.

So this is your first feature film. You’ve directed short films. How big of a jump was it?

Pretty big mostly because of the amount of time. It was basically the better part of 5 years of my life. I started working on it when I graduated from my MA at National Film & Television School which was 2014 then a couple of years to even get it into development with Film4 and then develop the script for a couple years and you’re making it for a year and a half so the stakes feel a lot higher. Plus I feel like I’ve wanted to make a film since I was 12 or 13 so I wanted to make a feature film by this point in my life. So the stress levels you put on yourself can get more intimidating. Although by the time we got to the shooting I’d gotten a lot of my freaking out out of the way.

So in some senses you are a lot better supported, we had a good budget and a fantastic crew and really great producers and Film4 and the BFI were fantastic so I felt supported which is great. Compare this to a short and everyone is doing a bit of everything and you end up directing and writing but you’re also having to sort out all this logistical stuff as well and book vans and work out where the food is coming from and where the toilets are whereas on this film I think this was the first time I’d done something where I was pretty much just directing.

What was it like working with Morfydd Clarke and Jennifer Ehle and setting up those relationships?

It was really fun and to be honest we didn’t have a lot of time to set stuff up because Jennifer is from New York and she came to the country a few days before we started shooting and a lot of that time was spent sorting out her costume, she has the bald wig makeup which she had to have fitted so myself, Morfydd and her had a day of camera tests and we would chat. They just did it really. For the most part they both just got the script and once the actors knew what it was about and why they were doing something they’re both really phenomenal actors and it showed. There was a definite attitude of trying things out and figuring out what worked. It helped that both Jennifer and Morfydd are both chilled and unpretentious.

As I was watching the film I saw the house as another character. There’s a gothic feel to it. How difficult was it to find a house that was the perfect setting?

At first we looked at a much larger, grander house that felt like a haunted house which was a bit more over the top. We were lucky actually the house in the film is situated in London so it was an easy commute. Everyone could cycle or get the tube. It was a fairly empty shell when we got there so my production designer Paulina Rzeszowska did this amazing job. Pretty much everything you see in the house apart from the wood panelling and the crazy church window up the stairs had to be put into the house. So we had a lot of control to make it look how we wanted it to.

I like playing with the usual horror tropes, innocent young woman sees the haunted house on the hill and I hoped audiences would see her going into this dangerous area but really she’s the danger comes more from her and I wanted it to have a sensual energy to it as well as I’m inspired by a lot of films that come from the 60s.

So we learn very little about Maud throughout the course of the film. Much is alluded to and left to the imagination. Did you have her background mapped out?

I didn’t go to the same level of detail as Morfydd, for example, this happened when you were a child although we did have chats about what we wondered did happen to Maud. There is a specific moment in the film that was inspired by a nurse I spoke to once that happened to her. It involved a patient having had chest surgery and her performing CPR and her hands went through. It was a push and pull scenario about what to reveal and what not to reveal. It was all about working out what kind of person she is and what kind of life she lead as someone who maybe didn’t have anyone to fall back on, or any real friends to depend on. It was a perfect storm of stress and alienation.

Finally, Rose as this is your story and it’s left open to interpretation for the audience would you say there is a definitive answer as to what is going on?

Yeah, I deliberately wanted it to be a film that could work either way. I always felt though that the way the film ends there is no longer any ambiguity.

SAINT MAUD is at Irish cinemas from Dec 4th