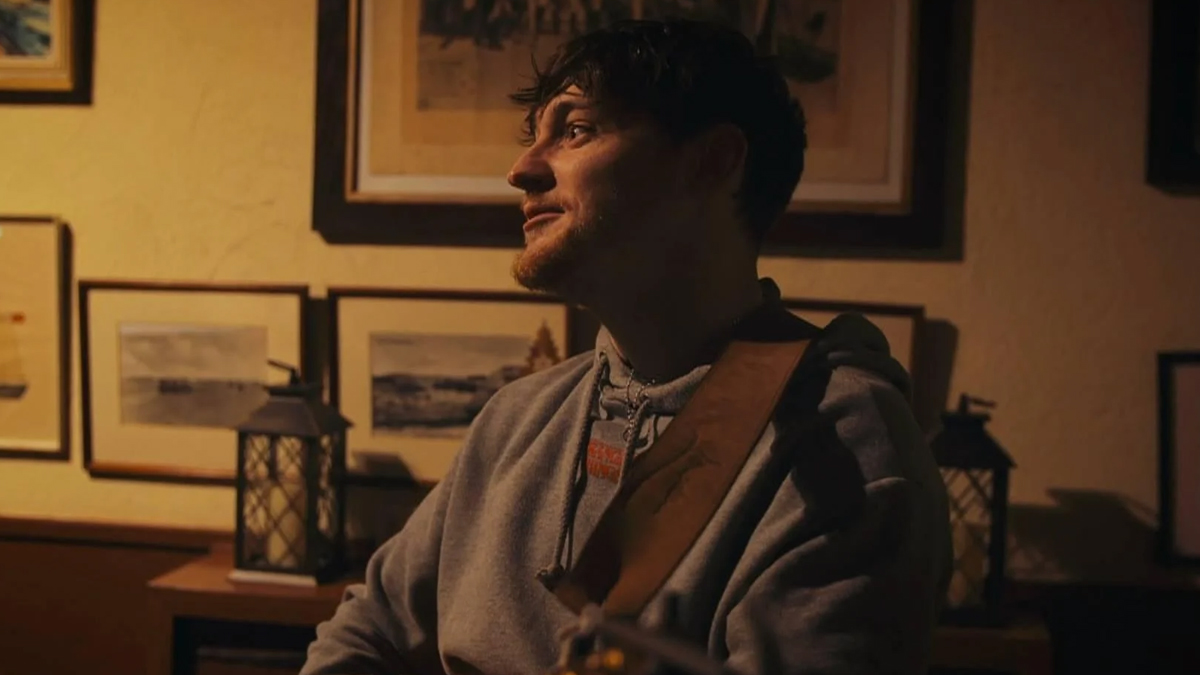 Ryan McMullan : Debut is an innovative new music documentary that follows up-and-coming singer songwriter Ryan McMullan as he prepares for the release of his debut album.  The team behind the film have been documenting Ryan’s career for the best part of four years.  The film is directed by award-winning filmmaker Brendan J. Byrne who previously made ‘Bobby Sands: 66 Days’ & ‘Gaza; No Stone Unturned‘

The film centres around a four day recording and listening session in Cruit Island, County Donegal at the end of 2019, where Ryan and his team assess all the songs competing for a place on the album. Against this majestic landscape, we get to know the film’s key players – the film’s principal, Ryan McMullan, his artist/mentor Foy Vance and manager/drummer Paul ‘Hammy’ Hamilton. Threaded throughout is the back story of how Ryan has reached this point, including footage from his support tours with Ed Sheeran and Snow Patrol.

How did you first begin working with Ryan McMullan?
I heard a BBC radio presenter say, “and that was Ryan McMullan, certain to be a rising star from Northern Ireland’s rich seam of music talent”. But I hadn’t heard him sing. I listened back later on catch up and thought – wow – he’s great. So it was very spontaneous, kinds out of the blue,

What was the appeal of the film for you?
I felt that here’s was someone so talented from the same place that I’m from and I haven’t heard about him. How could that be. Then I thought about it more and began to realise the thin thread of separation that lies between huge talent and wide recognition. I And I thought….that’s interesting. This is no X factor quick route to fame. This is the proper old fashioned way of hard work, ambition, all backed up by fabulous raw talent of course, and I thought – that’s something worth documenting….the period before things MIGHT take off.

The documentary is filmed over 4 years – how difficult was it to narrow down 4 years worth of footage into a movie?
Editing is where all films essentially are truly crafted. While we filmed Ryan over a period of 4 years, some of that filming happened on the road by some of his fellow band members because for much of that time, we weren’t fully funded. And then you also realise that too much footage like that has a too similar a quality to it. So you need to find a core spinal narrative for the film which you hang the best of the footage you have captured off. Once you land on the structure of the film, and a notion that you can thread the tour/on the road footage chronologically throughout, then you have a good plan.

What type of discussions did you have with Ryan before beginning the documentary about how the finished product might look?
The beginning stages are all about hanging out a bit together / in the studio and gaining the trust of the artist. It’s about learning not to get in the way, to try and fade into the background where you can, but at the same time, make suggestions here and there that you think might help build a particular sequence. Its more about aspiration at that point – rather than concrete plans. Everyone wants it to be the best it can be – of course – but it takes a while for the idea of what form the film will take to take hold.

How much did the story change over the shoot?
After about 2 years documenting Ryan in the studio and wherever we could get him within budget, I realised we would need a spinal narrative. Somewhere where we could get Ryan, his mentor Foy and manager Hammy in the room for a number of days where they could discuss the debut album and work on each of the tracks, to eavesdrop on a process that would see the track list of the album be decided, and those songs refined, revised, re-recorded. I wanted to do that somewhere cool, somewhere miles away where Ryan and his team would have little or no distraction. So I chose a place close to my own heart, Cruit Island Donegal, where I had been going on and off for around 30 years…a little cluster of traditional Irish cottages overlooking the wild Atlantic. It would be both a Bolthole, but also give the film a powerful visual canvas. So off we went!

Music documentaries come in many different shapes and sizes, did you visit any classics to see how they were out together?
I deliberately didn’t watch any specific music documentaries while I was making this because I didn’t want to be caught up in any specific influences to avoid any charges of copying something – except I watched Ed Sheeran’s ‘Songwriter’, because I didn’t want to be seen to be in any way of drawing from whatever that is – given that Ed is such a supporter of Ryan’s and he features in our documentary. Also, most music docs are about established artists who have already made it with the film charting the rise to stardom, normally with many ups and downs along the way. As we were capturing the beginnings of Ryan’s professional career, I figured there was little out there to compare it with. I just thought – get the head down and try and make it the best I can.

What are your thoughts on some of the more recent Irish documentaries like the Phil Lynott movie or Shane MacGowan movie?
I loved the Shane MacGowan movie….it took me a while to get into it – the early animation scenes…..seemed to me that it was going to go in a particular direction. But once I acclimatised to Shane’s voice I got really into it. One or two sequences were a little gratuitous, but other than that, what an artist, what a journey – and in some respects – what a shame…..I wish he could be around longer than his lifestyle choices may dictate. But hey, that’s rock and roll. I just make films. I haven’t caught the Phil Lynott film yet – but my old friend and colleague Emer Reynolds directed it – so I’m sure it is very strong and distinct.

The scenery of Donegal that you shot is stunning and so cinematic, and the Atlantic views were clearly an inspiration for Ryan, was important to capture some of that scenery in the film?
Ryan has written a lot of his songs in Donegal. So I knew it was a place he feels comfortable in. I also thought it would make an instant connection with an international audience….marrying scenes of Ireland’s natural beauty and coupling it with our renowned artistic talent. That it would give audiences beyond these shores a real connection to the film from the outset. Films are about stories and images, and the unique combination of both of them – amongst other things. SO Donegal helped amp up the visual side of the film, and that was a deliberate choice for sure.

The movie has previewed at festivals like the Galway Film Fleadh & Docs Ireland, how has it been received?
Galway was great. The day of the screening was the hottest day in Ireland and it was an outdoor screening during the day – so the conditions were challenging in a way that they often aren’t in terms of premieres – a controlled, cinema environment where the lights dim before the show starts….that said, the audience really loved it. there is a real sense from people who see the film – my God. That guy is so talented. How have I not heard of him. Questions I asked myself at the very beginning. It this respect, the film is very much a ‘discovery’ experience. It’s a film about the moment before an artist like this could POP. That makes it hard to promote in some respects because you are not promoting an already established celebrity. You are promoting something new. That’s exciting to me, but it makes it harder to get the message out.

Are film festivals important for a film like this to help get the word out?
Festivals are important full stop. In terms of industry awareness, audience awareness. Its important to get a bit of good word of mouth. “Hey, have you seen this film yet?” Its helps with the film’s profile and the chances of more people getting it to see it. Festivals are a film’s first entry point into the world, and you soon know if you are sailing into a fair wind or a storm!!!

The poster is a gorgeous piece of art itself – can you tell us about how it came together?
The poster designer Peter Strain is one of the most talented people I know. I got to know him just over 5 years ago when I noticed some of his work on TV and I enquired about it – who did that. We met and he agreed to do the animation sequences for my Bobby Sands film, 66 days and he did the film’s poster . Since then he has done pretty much everything I have been involved with in the lead decision making role. I tend not to be overly prescriptive with him, but I’m always interested in what will fire his imagination…..What will capture his eye. His work is just stunning. His style is very distinctive so I try not to share him around too widely but je’s another one who is going to go VERY BIG someday soon.

RYAN MCMULLAN : DEBUT will play at various venues across Ireland from September 2nd