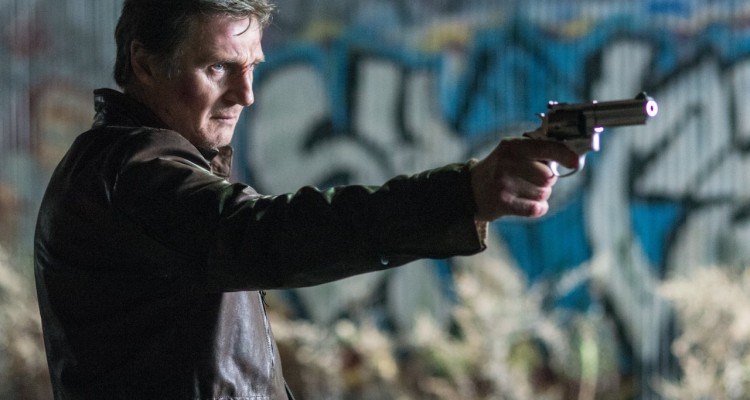 THE PLOT: Having risen through the crime ranks side-by-side, Brooklyn blood brothers Shawn (Harris) and Jimmy (Neeson) go way back. And deep down. Jimmy was hired gun no.1 for Shawn as he became a crime boss, and he used that gun so well, Jimmy earned the nickname The Gravedigger. It’s late in the evening though, and this gun is all set to retire. If only just to convince his son, Mike (Kinnaman), that his old man is okay to have around his wife and kids. Before that happens though, Jimmy finds himself having to save Mike’s life when Shawn’s headstrong son Danny (Holbrook) pulls a gun on him, the battle to the death is set in motion…

THE VERDICT: Okay, no sniggering down the back, but, I was way off the mark when I sounded the death knell for the recent TAKEN outing from the surly, burly Mr. Neeson, believing that the joke of Hollywood’s favourite jolly green giant becoming the new Rainier Wolfcastle was no longer funny. But then TAKEN 3 opened to huge numbers in the US shortly afterwards. It also opened to quite a few groans, not only from the critics but cinema-goers too. Just how long can Neeson run with this Chuck Norris routine though remains to be seen.

And given that RUN ALL NIGHT shares quite a lot of DNA with last year’s retro actioner WALK AMONG THE TOMBSTONES doesn’t bode well for Neeson. TOMBSTONES did bomb, suggesting it’s not so much the star as the vehicle he’s driving. Which is all just business talk, of course, but that does seem to be what Neeson is all about these days; taking care of business, by taking care of business. Again and again. And again.

Reuniting here with his NON-STOP director, sure, Neeson’s got every right to sink deep into this B-movie genre with his A-movie talent, but the payoff has become so familiar, so predictable, that it’s hard to get truly excited whenever Liam’s latest character goes on his expected roaring rampage of revenge. For pretty much the entire movie.

What you’re left with is a rattler of an actioner that, on a Tuesday night on TV, will certainly go down a treat with some cans and a half a packet of chocolate Hobnobs. Anyone brave enough to tell Neeson he should go back to acting…?