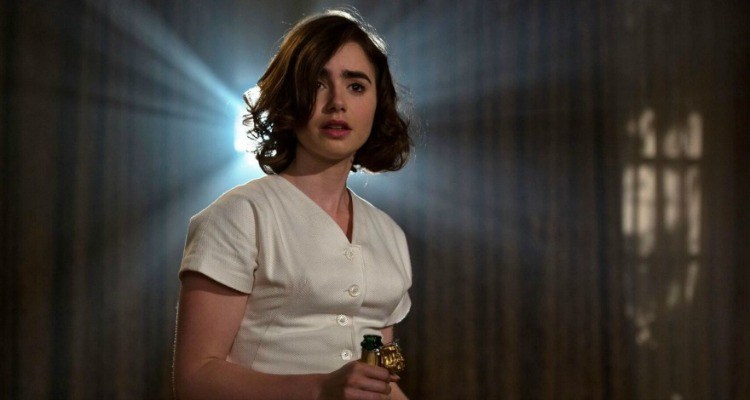 RULES DON’T APPLY (USA/12A/127mins)
Directed by Warren Beatty. Starring Lily Collins, Warren Beatty, Alden Ehrenreich, Matthew Broderick, Martin Sheen.
THE PLOT: In 1959, Marla Mabrey (Lily Collins) comes to LA to be an actress under contract to movie and aviation mogul Howard Hughes (Warren Beatty). Marla initially falls for her driver, a young man named Frank (Alden Ehrenreich) who is expressly forbidden from having dalliances with any of the contracted actresses. When Marla finally meets the reclusive Hughes, however, her relationship with the eccentric billionaire takes an unexpected turn.
THE VERDICT: Director and writer Warren Beatty has wanted to make a film about Howard Hughes for over forty years, after seeing Hughes in a hotel lobby and becoming fascinated with him. Although there are elements of truth to ‘Rules Don’t Apply’, it is difficult to tell where truth and fiction meet, and just what story Beatty is trying to tell.
‘Rules Don’t Apply’ has a stellar cast, including Oliver Platt, Alec Baldwin, Matthew Broderick, Annette Bening, Martin Sheen, Steve Coogan, Paul Schneider and Ed Harris in supporting roles, with Warren Beatty taking on the role of reclusive billionaire Howard Hughes. Beatty looks little like Hughes, and although he tries to get Hughes’ eccentricities right, they come off as the whims of a powerful man and thoughtlessness, rather than any kind of illness. Alden Ehrenreich as Frank, is a little wishy washy. While Ehrenreich has the right look for the time period, he constantly struggles against a strange script and choppy editing, never managing to make his character feel truly real. The same goes for Lily Collins as Marla Mabry, who has a certain charm to her, but lacks the charm that the film seems to think she has.
Warren Beatty’s screenplay makes sure to include real events throughout ‘Rules Don’t Apply’, such as the loan of $205,000 to Richard Nixon’s brother Donald, his hermit-like life in Las Vegas and the Beverly Hills Hotel, and in particular, the memoir hoax by Clifford Irving – renamed Richard Miskin for the sake of this film. It is hard to tell how much of the remaining story is based on truth, and it is very difficult to find a throughline in the story to grasp onto, since the film is as choppy and messy as it seems that Hughes’ mental state was toward the end of his life. There are potentially three stories running through ‘Rules Don’t Apply’; the potential affair between a younger actress and the older billionaire, the love triangle between Hughes, Frank and Marla, and the legal and money troubles faced by Hughes toward the end of his life. All three plots end up vying for the audience’s attention, with none of them naturally coming to the fore.
As director, Warren Beatty never seems sure what he wants the focus of the film to be; the editing means that the story is choppy, messy and often hard to grasp onto, and while it may seem that the film is cut to be a comedy, there are precious little laughs to be had, while the important scenes vanish too quickly from the screen. The performances in the film are fine, with the supporting cast perhaps doing better than the leads, but the entire affair feeling messy and not well thought out.
In all, ‘Rules Don’t Apply’ is never sure if it is trying to be a biopic, a love triangle or a comedy, and the choppy editing never allows the audience to grasp onto any important part of the story, leaving them trailing in the film’s incredibly chaotic wake.
RATING: 1.5/5
Review by Brogen Hayes