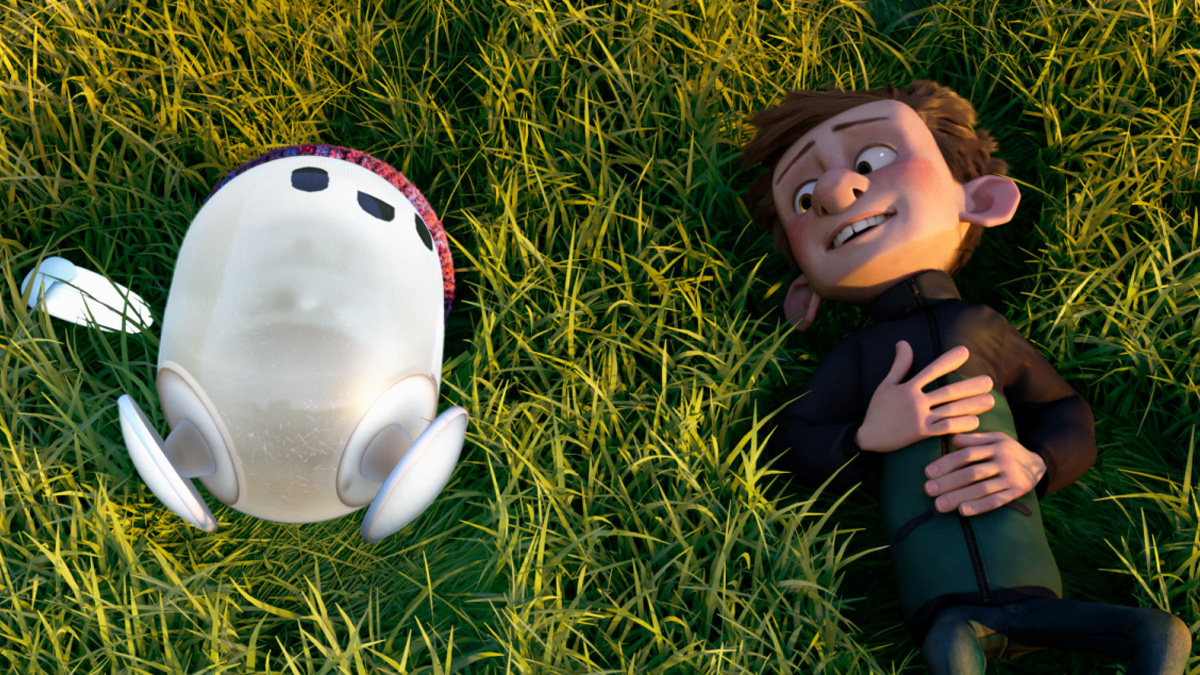 The Plot: Gawky Barney (Jack Dylan Grazer) isn’t the popular kid in school, but he knows what a friend means to him. When new product B*Bot is launched by company Bubble, it’s the must-have accessory for every kid. B*Bot is a social media connectivity device and best friend, but Barney finds himself the only kid without one. His Dad Graham (Ed Helms) feels sorry for him and picks up a damaged reject bot about to be scrapped. Barney is delighted, but soon finds out that his new device that he dubs Ron does not compute. Ron has a mind of its own and doesn’t obey its programming. The duo will have to work together to find out what the meaning of friendship really is…

The Verdict: In this social media-obsessed age, it’s a delight to find a family film that has all the bells and whistles of a modern animation but with something to say about the nature of friendship. That something isn’t forced or patronising either, talking with its audience rather than down or to it. After a dearth of decent family films recently, Ron’s Gone Wrong should fit the bill or rather plug in to the right socket. It remixes elements of Short Circuit and adds dashes of Star Wars and Wall-E to lively effect, while delivering plenty of action and some slightly subversive commentary on social media privacy – or the lack thereof from the overarching company involved.

It focuses on the unlikely but growing friendship between Barney and his new pill-shaped bot Ron. Ron is like R2-D2 re-designed by Apple, but with a similarly anarchic and independent nature – and a sense of humour too. At first frustrated by his malfunctioning bot, who apparently must keep within six feet of him (even bots are socially distanced these days), Barney comes to warm to the little guy as Ron learns what the meaning of friendship is. Ron’s original code wasn’t downloaded, so he learns on the job so to speak. This is where the heart of the film is and where the film works best in its delivery. The voice work by Jack Dylan Grazer and Zach Galifianakis is spot-on here, working in sync with the rubbery but decent animation which has that Hollywood sheen to it. Barney learns that there’s more fun to be had offline than online and there’s a lot of fun watching them bond.

Less successful are the elements involving the Bubble company. It features a kindly programmer being pushed out by a greedy boss who has other plans for the B*Bot. A company spying on kids through their devices, invading their privacy and seeing them as commodities with dollar signs above their heads has a certain subversity to it but it’s clumsily handled by co-directors Sarah Smith, Jean-Philippe Vine and Octavio E. Rodriguez. Inevitably, there’s a last-minute rush into the bowels of the company to solve the problem, which takes away somewhat from the main story about what makes Barney and Ron tick. Does there have to be a predictably nefarious company man who stands in the way of progress, as the cutely unpredictable Ron points the way forward for the company’s future?

That said though, not all has gone wrong here. There’s still much to enjoy about this rather sweet film about friendship in whatever form that comes in. Like its title character, Ron’s Gone Wrong gives off the impression of a Pixar film that went rogue from the Emeryville-based studio without being one (it’s from fellow Disney-acquired 20th Century Studios). For a film that’s knee-deep in technological wonders, it’s main theme is all too human and that’s something to be thankful for. Connect, download, install and enjoy as this one is right on.