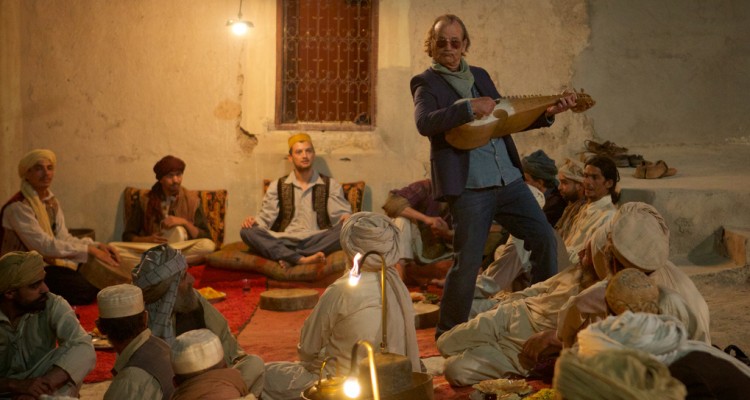 ROCK THE KASBAH (USA/15A/106mins)
Directed by Barry Levinson. Starring Bill Murray, Zooey Deschanel. Kate Hudson, Bruce Willis, Danny McBride, Scott Caan.
THE PLOT: Richie Lanz (Bill Murray) is a down on his luck talent agent based in California. When a USO show organiser sees his act Ronnie (Zooey Deschanel) singing in a bar, he gives Lanz the idea to take Ronnie on a tour of US bases in Afghanistan. On arriving in Kabul, Ronnie is disillusioned with the city and quickly absconds with Lanz’s money and passport. To make some cash to find a way home, Lanz agrees to deliver arms to a small village, and while there, discovers Salima (Leem Lubany) has a wonderful voice, and he sets out to convince her to take part on TV show Afghan Star.
THE VERDICT: Inspired by the 2009 documentary film ‘Afghan Star’, ‘Rock the Kasbah’ could be forgiven for having good intentions at its heart; showing Afghanistan to be a country trying to get back on its feet after years of Taliban rule. The trouble is that the script is flabby, the editing strange and although Bill Murray doing the Bill Murray schtick is always wildly entertaining, there needed to be a stronger directorial hand here.
The cast is made up of Bill Murray, Zooey Deschanel, Kate Hudson, Bruce Willis, Scot Caan and Danny McBride, but the trouble is that other than Bill Murray, this wonderful cast are not given a chance to do much. Deschanel disappears after a small freak out, Hudson plays a shockingly stereotypical hooker with a hear of gold, Willis just gets to shout a bit and point guns, and McBride and Caan get to raise a little bit of hell, before being forgotten. This is a serious waste of strong talent.
Screenwriter Mitch Glazer has done some great work with Bill Murray in the past – in the form of ‘Scrooged’ and, to a lesser extent, ‘A Very Murray Christmas’ – but the screenplay here is an absolute mess. Characters come and go, the dialogue is nothing to write home about, and the final moments of the film make little to no sense at all. The character of Salima is interesting on the surface, but other than being feisty and able to sing, she is little more than a plot device.
Director Barry Levinson has made some brilliant political satires in the past, including ‘Good Morning Vietnam’ and ‘Wag the Dog’, but there is none of the director’s trademark critical and biting observations on show here. Instead the film is a watered down showcase of how quirky Bill Murray can be, and a little patronising to the situation going on in Afghanistan at the moment. The film is badly paced, subtitles are notably absent and the final act of the film is a rambling, badly edited mess.
In all, ‘Rock the Kasbah’ relies too heavily on Bill Murray, who is nowhere near on top from here. The rest of the cast come and go seemingly without reason and although the film has good intentions at its heart, it comes off as patronising, flabby and messy.
RATING: 1/5
Review by Brogen Hayes