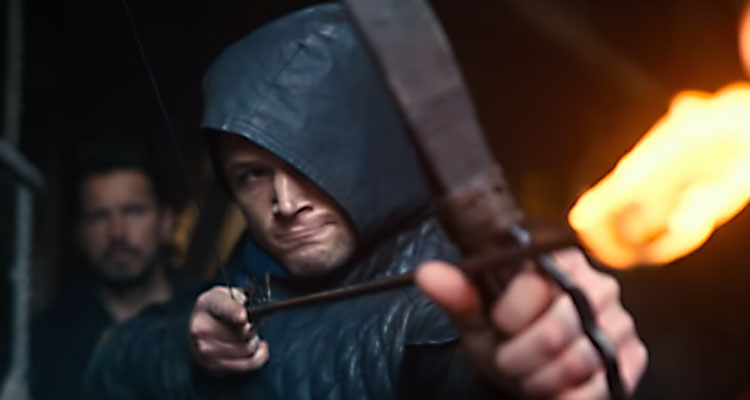 In short: Way off target

The Plot: Nottingham nobleman Robin (Taron Egerton) is drafted into war in Arabia, where he clashes with a Moor by the name of John (Jamie Foxx). Thought dead, Robin returns home years later to find that the dastardly Sheriff (Ben Mendelsohn) has enslaved the people for his corrupt war effort. He also finds that his lady love Marian (Eve Hewson) is now with rabble-rouser Will (Jamie Dornan). John re-appears and convinces Robin that they have a common enemy in the Sheriff. He trains Robin and they set out to drain the Sheriff of his most precious resource – money…

The Verdict: Here it is. Guy Ritchie’s new take on the oft-told tales for the ages – a geezered-up version of Robin Hood. Except for the simple fact that it’s not directed by Guy Ritchie, nor does he have anything to do with it. Someone has been studying his films obsessively in an attempt to ape his particular style of filmmaking. That someone is Otto Bathurst, a fellow Englishman who makes his feature debut here after directing TV shows like Peaky Blinders. The final result is something of a disaster, a dud, leaden arrow that is way off target and thunks to the ground with minimal effect.

Where to start? How about a vaguely ambitious attempt to do a revisionist take on this story as old as the ages? Been there, done that with Ridley Scott. How about a fun romp with a pantomime Sheriff and a friendly Moor? Already done to popular effect with the two Kevins (Reynolds and Costner). It’s clear that Robin Hood 2018 is already stepping on the arrows left behind by previous incarnations. All that’s left is to try and jazz it up a bit by revising the story, changing the motivations of several supporting characters and then filtering it through the Ritchie machine to make it relevant to the short attention spans of younger generations.

This isn’t your grandfather’s Robin Hood. It’s a million miles from Errol Flynn. Forget historical accuracy, this version is about as anachronistic as you can imagine. Medieval Nottingham looks more like Mediterranean Italy circa the Renaissance. No dirty peasants or grotty streets here. Everyone looks immaculately presented, even Marian who works daily in the mine’s kitchen. Later on, there’s a casino scene straight out of a Bond film. In the action climax, Molotov cocktails are lobbed (eh?). How much more ridiculous can this film get? There’s a star-crossed romance between Robin and Marian that’s told in the space of a single scene. One character giving up on another without so much as a confrontation. There’s an oddball mix of accents too, which suggests that it takes place in Middle Europe rather than the Middle Ages.

It’s a serious test of patience, as you’re just waiting for the next insult to come along. Apart from Jamie Foxx and F. Murray Abraham making acting gold out of their underwritten scenes, everyone else looks bored. Egerton is a bland Robin Hood, while Hewson struggles to make Marian more than just a damsel in distress. The hugely talented Mendelsohn is in danger of being typecast as a snarling villain at this stage. The action sequences are samey and rely heavily on slo-mo. The whole affair has forgettable written all over it. Robin Hood 2018 has nothing new to offer, other than the amusing prospect of Ritchie suing for passing off his films.