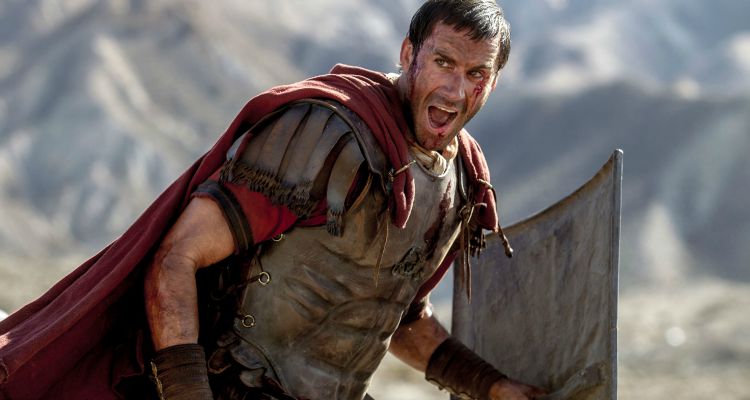 RISEN (USA/12A/107mins)
Directed by Kevin Reynolds. Starring Joseph Fiennes, Cliff Curtis, Tom Felton, María Botto, Andy Gathergood, Luis Cajello.
THE PLOT: Told through the eyes of a Roman Tribune (Joseph Fiennes), Risen is the story of how this loyal Roman leader became curious about the man named Yeshua (Cliff Curtis), and followed his disciples to find out more about the man who rose from the dead three days after being crucified.
THE VERDICT: There is an interesting piece of trivia about ‘Risen’ on the film’s IMDb page; in 2013, director of ‘Risen’, Kevin Reynolds, was attached to a project that was seen as the unofficial sequel to the 2004 film ‘The Passion of the Christ’. Well, having seen ‘Risen’, it seems that this is that film.
Joseph Fiennes leads the cast as the Roman Tribune, loyal to Pontius Pilate until seeing becomes believing. Thank god for Fiennes and his even if stoic performance, since he manages to shoulder much of the drama of the film. The trouble is that the film is badly written and drawn out, with an incredibly uncharismatic portrayal of Jesus and a band of disciples that are so happy with their faith that they come off as grinning simpletons. Cliff Curtis plays the monosyllabic Yeshua – that’s Jesus to you and me – and Tom Felton, María Botto, Andy Gathergood, Luis Cajello and Antonio Gill make up the rest of the cast.
The screenplay for ‘Risen’, written for the screen by Kevin Reynolds and Paul Aiello, hinges on an idea that is not a bad one in and of itself; the idea that a Roman soldier could be curious about the man crucified by Pontius Pilate, but the trouble is that the film is so filled with anachronistic colloquialisms, odd accents and uneven performances that this idea is stilted before it begins. Add to this some heavy-handed religious moments and a terribly slow pace, and Risen becomes dull and unengaging.
As director, Kevin Reynolds makes the film drawn out and dull, with the audience able to feel every second of the 107 minute running time. Add to this the fact that the film’s audience is obviously the engaged Christian one, and any fun, action or dramatic licence that could be taken with the characters is studiously ignored. Jesus becomes rather like a miracle working Jedi wandering through scenes in long shot and even though Joseph Fiennes is obviously a talented actor who brings some weight to the film, he is never allowed to be anything other than an observer, making his performance stoic and rather quiet.
In all, ‘Risen’ is a film directly aimed at those who will want to go and see it. Anyone curious about the Bible stories, looking for a way in or a good old fashioned epic along the lines of ‘Ben Hur’ or ‘The Ten Commandments’ are not going to find what they are looking for here. Fiennes tries his best, but with an uninteresting script and drawn out pacing, he is fighting a losing battle.
RATING: 1/5
Review by Brogen Hayes