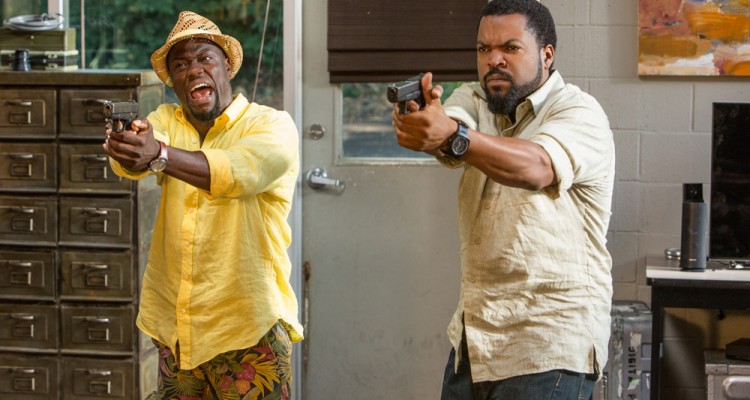 RIDE ALONG 2 (USA/12A/102mins)
Directed by Tim Story. Starring Kevin Hart, Ice Cube, Olivia Munn, Tika Sumpter, Benjamin Bratt.
THE PLOT: Brothers in law Ben (Kevin Hart) and James (Ice Cube) are reunited as they chase down a hacker in Miami. Little do they realise that this hacker has ties to a major corruption case going on in the city and once things kick off, it looks increasingly unlikely that Ben will make it back to Atlanta in time for his wedding.
THE VERDICT: The first ‘Ride Along’ film – released in 2014 – made over $150 million at the worldwide box office, so it is not surprising that this odd couple cop pairing is back on our screens, but for all that the first film was not all that funny, this new outing is somehow even less entertaining.
Once again, Kevin hart screeches his way through the film and the character seems to have learned nothing from the danger he found himself in the first time he hit the road with his brother in law, but then the same can be said for Ice Cube as James, who is as surly, unyielding and unfunny as he was the first time out. It is obvious that the idea was to have Hart as the comedy and Ice Cube as the straight man, but since the comedy is not even a little comedic, this failsafe pairing falls apart almost immediately. The rest of the cast features Tika Sumpter, Benjamin Bratt, Ken Jeong and Olivia Munn.
Phil Hay and Matt Manfredi’s screenplay sees the characters living up to the charateristics of the annoying shouty one and the annoying quieter one, and neither one are given the chance to learn anything throughout the film. In fact, the shenanigans the two find themselves in, as well as being horribly unfunny, predictable and unentertaining, reinforce the notion that their behaviour is what gets the job done, and so never even gives the two a chance to learn or grow. Also, ‘Ride Along 2’ is just not funny. Did I mention that already? Well, it bears repeating.
Director Tim Story doesn’t go any way to direct his actors bar seeming one word descriptions – screechy, grumpy, more grumpy – leaving him free to direct the set pieces, for what they are, and make the party scenes are loud as they can be. Hart and Ice Cube seem to go along for the ride, but with such a weak script and seeming lack of desire to do anything funny or original, ‘Ride Along 2’ is doomed to fail as badly as the first one did.
In all, ‘Ride Along 2’ is a film that is not funny and populated with irritating characters who seem to learn nothing from their actions. Hart and Ice Cube do what they can but with a weak script and unclear direction, the film was doomed from the start.
RATING: 1/5
Review by Brogen Hayes