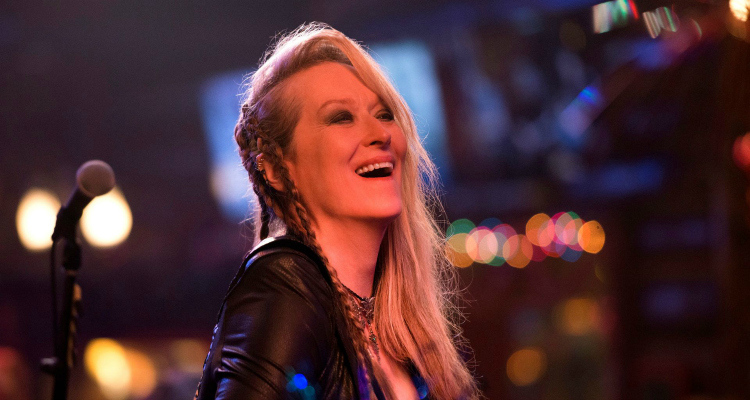 RICKI AND THE FLASH

RICKI AND THE FLASH (USA/12A/101mins)
Directed by Jonathan Demme. Starring Meryl Streep, Mamie Gimmer, Kevin Kline, Rick Springfield
THE PLOT: Ricki (Meryl Streep) is a musician who gave up her marriage and her relationship with her children for the sake of her career. Reduced to playing in a dive bar in the San Fernando Valley, Ricki reunites with her family after her daughter Julie’s (Mamie Gummer) husband leaves her. Ricki’s former husband Pete (Kevin Kline) may be grateful to see her, but her kids are most certainly not…
THE VERDICT: It doesn’t feel that long since writer Diablo Cody brought us into the world of Mavis Gary in YOUNG ADULT, and she has returned to the territory of a disenfranchised woman returning home to the scene of her greatest disasters with RICKI AND THE FLASH.
It is not really surprising that Meryl Streep is electric as the lead character, Ricki. Streep embodies the character well, making her charming and endearing, if ever so slightly misinformed and erring on the side of right wing. Mamie Gummer is strong as Ricki’s manic, depressed and angry daughter, who seems to blame her mother for all of her problems. The idea of casting Streep’s daughter as her on screen daughter could be seen as stunt casting, but she does well with the role. Kevin Kline does well with that he is given as Ricki’s ex-husband Pete and Rick Springfield is warm and kind as Ricki’s band mate and sometime lover Greg.
Diablo Cody’s screenplay, as mentioned, seems very familiar in the light of her previous work YOUNG ADULT; Ricki is another delusional woman who returns home and is given some life lessons she didn’t necessarily want. The character is also another woman who is emotionally closed off and seems to be in some kind of arrested development as she denies wrongdoing in any part of her life. it is not that these are not powerful messages, it is more that we have seen this before, from the same writer, not that long ago. The final resolution of the film is more than a little convenient too, which undermines the role of Ricki as the outsider that the audience should root for.
As director, Jonathan Demme allows Meryl Streep to be vibrant and bright at the centre of the film, but once she returns home from visiting her family, the film stumbles and seems to run out of steam. It seems that this was to be compensated for by throwing in a load of songs by Meryl Streep as Ricki – and her band The Flash – and while Streep is a helluva performer, the songs do nothing to move the story along, instead stifling and stilting it.
In all, if you have seen YOUNG ADULT, then you have seen RICKI AND THE FLASH. That said, Streep makes this film watchable and her performance is great, but she is hampered by some muddled directing, overuse of songs and the feeling that we have seen all of this before.
RATING: 3/5
Review by Brogen Hayes